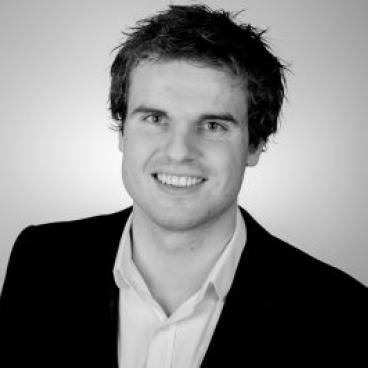 Laurens Duin is a Researcher at Ecologic Institute. His main interests include European economics, European climate and energy policy, the circular economy and urban sustainability. Laurens is a native speaker of Dutch, is fluent in English and German and has good working knowledge of French and Spanish.

Laurens is currently involved in the BRIGAID project, which aims to bridge the gap for innovations in disaster resilience and is also part of Horizon 2020. He structurally supports innovators on market research and business development for their innovations that address floods, droughts and extreme weather, through the use of an online tool called the Market Analysis Framework +.

At Ecologic Institute, Laurens helped to determine the coverage of environmental impacts in EU impact assessments for the German Environment Agency. He also supported the project Measuring the IMPACTS of the Transition to the CIRCULAR Economy (CIRCULAR IMPACTS), within the European Union's Research and Innovation programme Horizon 2020. For this purpose, he led a work package on designing an Evidence Library for circular-economy research and was the lead author of a case study analyzing the macroeconomic and societal impacts of concrete recycling in France, among others. He was also editor for the brochure "Innovation, Renovation, Transformation" that discussed good practice examples of projects promoting green growth across Central, Eastern and Southern Europe.

Prior to coming to Ecologic Institute, Laurens worked as a student assistant at the University of Amsterdam (the Netherlands) on several occasions, among others assisting career pathways coordinators in their daily activities.

Laurens studied European Studies at the University of Amsterdam, majoring in European Economics and minoring in American Studies. He completed the internationally oriented master's programme European Policy at the same institution. During his studies, Laurens was responsible for the energy and climate chapters of a publication, which analyzed the relation of the Netherlands to the European Union and focused on the goals of the 2016 Dutch EU Presidency. His master thesis focuses on policy transfer in the EU in relation to the PARENT project, which aims to increase the energy efficiency of European households by providing them with real-time information about their electricity consumption. 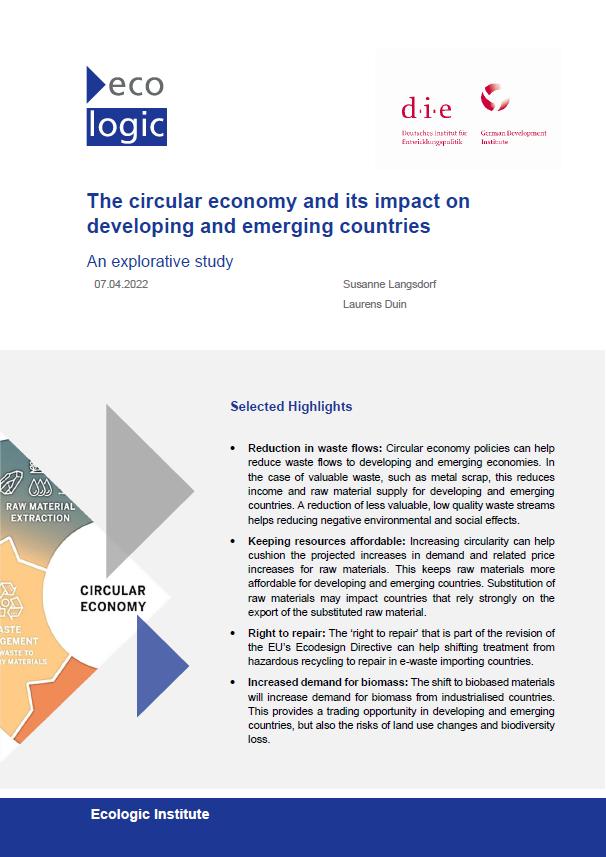 This study presents selected (inter)national and regional initiatives for the circular economy, including the European Circular Economy Action Plan and the circular economy in China's 14th Five-Year Plan and shows if and how these strategies take developing and emerging countries into account. Furthermore, the study explores some of the key effects that come with increased circularity. Key topics discussed are the effect on trade in primary raw materials, the shift to bio-based products, a possible reduction in waste exports and knowledge transfer. The report also provides a brief analysis of selected specific measures from the EU's Circular Economy Action Plan of 2020, with a special focus on their potential impact on developing and emerging countries.

The Circular Economy and its Impact on Developing and Emerging Countries 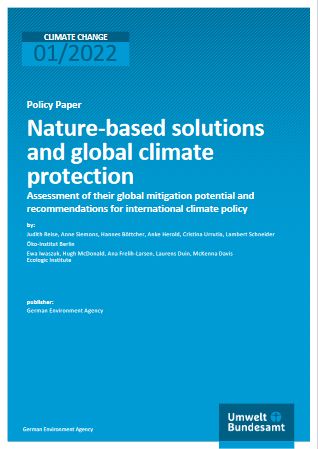 This study examines the role of nature-based solutions (NBS) for global climate protection and in international climate policy. It provides a critical assessment of global mitigation potentials of NBS in forests, croplands, grasslands, terrestrial and coastal wetlands, and settlements and provides recommendations for international climate policy such as under ⁠UNFCCC⁠. The results show that the potential of NBS to mitigate emissions is probably overestimated in the scientific literature due to various factors. Nevertheless, NBS can bring multiple benefits for people and the environment and should be promoted actively. 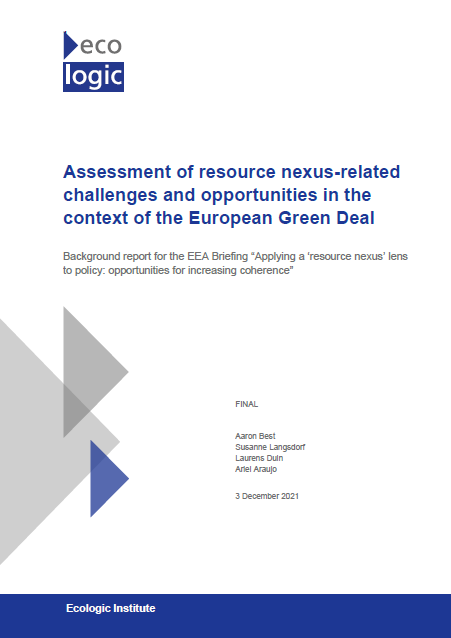 Background report for the EEA Briefing

Read more
Project
On behalf of the European Parliament, Ecologic Institute with support from IEEP investigate the potential of carbon farming to mitigate emissions in the EU and how to effectively increase carbon farming action. Ahead of two key EU Commission policy proposals in December 2021 (the 'Carbon Farming Initiative' and 'Carbon Removals Certification Mechanism'), the study summarises existing knowledge on carbon farming options, business models, and challenges. It also evaluates funding and policy opportunities to support its uptake.

Study for the EU Parliament

Read more
Project
The transition towards sustainability entails addressing systemic and interrelated resource challenges. Via the project "Assessment of resource nexus-related challenges and opportunities in the context of the European Green Deal", Ecologic Institute supports the European Environment Agency (EEA) in its objective to foster a better understanding on these topics for the European policy community and stakeholders. The project serves as background to an EEA briefing on the topic.

Read more
Project
In current environmental policy debates on resource conservation, the Netherlands are often cited as a good-practice example because of these absolute reduction targets. In this project, Susanne Langsdorf and Laurens Duin explored the Dutch targets and the vision for a circular economy. They shed light on the development, structure and implementation of the Dutch Circular Economy Program and related policy processes, including the established monitoring program.

Absolute Reduction of Resource Use

The Netherlands – a role model for Germany?