Cross-border trade and the rules governing it impact consumers. Trade has benefits for consumers, such as access to goods not available domestically. Yet it also has certain risks, such as exposure to traded goods that may be dangerous. Against this background, consumer organisations on both sides of the Atlantic have been discussing what a consumer-friendly trade policy could look like. Contributing to this debate, Christiane Gerstetter and Lena Donat of Ecologic Institute's Legal Team have compiled a study examining what complaint mechanisms for consumer organisations concerning international trade agreements could look like. The study was compiled on behalf of Verbraucherzentrale Bundesverband, the federation of German consumer organisations.

The degree of effectiveness of consumer-related provisions in trade agreements depends, among others, on the availability of enforcement mechanisms. Currently, there do not appear to be any adjudicative complaint procedures that consumer organisations could make use of when consumer-related provisions in a trade agreement are violated by one of the parties. More generally, however, international law does contain mechanisms allowing individuals, companies or civil society organisations to complain about a state party to an international agreement that allegedly violates the agreement.

The study reviews five existing mechanisms with a view to producing lessons learnt for the field of consumer protection: 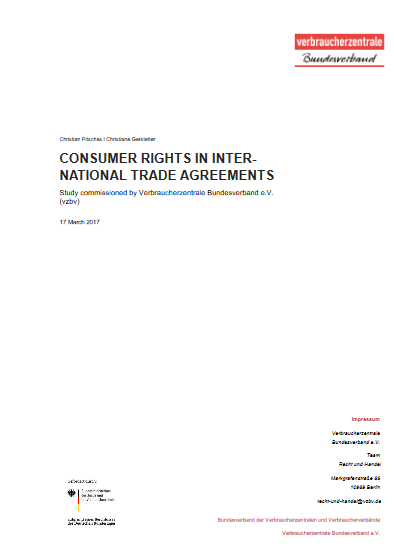 In principle, increased trade resulting from trade agreements can offer consumers access to goods and services that are less expensive or of higher quality. At the same time, there is a risk that rules in trade and investment agreements limit the sovereign right of states to adopt measures for consumer protection at the domestic level. Hence, much depends on how these agreements are designed. A study, compiled by Christiane Gerstetter, Senior Fellow at Ecologic Institute and Christian Pitschas, provides an overview of consumer-related rights in recent international trade agreements. The study is available fro download.

Read more
Project
International trade agreements can have an impact on consumers in different ways. On the one hand, they can lead to more or cheaper products to become available for consumers. On the other hand, these agreements contain rules for political and legal meaures that the parties to an agreement may adopt; this can limit the scope for regulation in favour of consumers. How trade agreements are designed is therefore important for consumers. In this project, Ecologic Institute compiles a study for the Federation of German Consumer Organisations, analysing how consumer rights are addressed in international trade agreements and how they can be enforced by consumer organisations.

In principle, increased trade resulting from trade agreements can offer consumers access to goods and services that are less expensive or of higher quality. At the same time, there is a risk that rules in trade and investment agreements limit the sovereign right of... Read more

ProjectPotential Impact of TTIP on Climate and Energy Policies
| Fotolia © Argus
Within this project Ecologic Institute wrote a paper discussing potential implications of TTIP on the (re-)municipalisation of energy services and community power projects. The paper is available for download. ... Read more

Potential Impact of TTIP on Climate and Energy Policies