Biodiversity continues to decline dramatically worldwide. However, current policy instruments, such as the EU Biodiversity Strategy 2030 and the UN Decade for Ecosystem Restoration 2021-2030, are generating new optimism and a great deal of political attention. Are these processes enough to tackle the biodiversity crisis? Or is radical change and rethinking necessary all the same? At the 6th Future Forum Ecornet, which was organized by Ecologic Institute in cooperation with ISOE on 15 June 2021, approaches for the protection of biodiversity were discussed.

The year 2020 was supposed to be the "Year of Biodiversity". However, due to the pandemic-related postponement of the UN Biodiversity Conference (COP 15) to 2021, the most important international event on the topic is now still to come. The 6th Ecornet Future Forum focused primarily on the national perspective: What can we learn from past efforts and how can we use these experiences to shape requirements and approaches for effective biodiversity protection in Germany? The event was moderated by McKenna Davis, Senior Fellow and Researcher in Biodiversity and Nature-Based Solutions at Ecologic Institute. Speakers included Sandra Naumann (Ecologic Institute), Till Hopf (NABU) and Marion Mehring (ISOE).

Many objectives were not achieved

Another Senior Fellow and coordinator in the field of biodiversity and nature-based solutions at Ecologic Institute, Sandra Naumann, initially focused her attention on the European level. The objectives of the EU Biodiversity Strategy 2020 have not been achieved. This is evident particularly in the state of nature, as the conservation status of habitats and species has actually deteriorated in recent years. While the legislation in the form of the Habitats Directive, the Birds Directive and other instruments is fundamentally sound, the implementation of these instruments in the member states is inadequate. Therefore, a great deal of hope is associated with the "Year of Biodiversity" 2021 – as demonstrated by Sandra Naumann with reference to the planned goals and measures of the new EU Biodiversity Strategy 2030.

Till Hopf, Head of Biodiversity at NABU – Nature and Biodiversity Conservation Union Germany, likewise began his opening address with a retrospective. He pointed out that the biodiversity targets set out in the 2017 coalition agreement had not been achieved at the national level either, partly because they had not been successfully integrated into other policy areas. For a successful protection of biodiversity, clearer responsibilities and better funding are needed, for instance to effectively implement binding renaturation plans. Given the urgency of the issue, it is now particularly important to move quickly into implementation, starting no later than the middle of the next legislative period.

Dr. Marion Mehring, head of the research area Biodiversity and Population at ISOE – Institute for Social-Ecological Research, pointed out the lack of expertise in action and orientation needed for successful biodiversity conservation. In her short presentation, she focused on socio-ecological perspectives and raised the question of what kind of biodiversity protection is needed in the 21st century. In her view, there is an urgent need to rethink the topic and to approach biodiversity protection more broadly, moving beyond natural science approaches, since the classic separation of nature and society has dissolved. Drawing on the social-ecological design principles developed by ISOE, she demonstrated the need for us to ask fundamental questions anew: Why do we want to continue to protect nature? And what will we mean by "natural" in the future?

The subsequent discussion, which was enriched by numerous questions from the audience, focused on further possible solutions. Both Sandra Naumann and Till Hopf emphasized the need for binding policy instruments with clear, sector-specific (interim) targets, since the principle of voluntarism had not worked in the past. These binding instruments, however, must also be backed up by controls and follow-up measures. In addition, there is still a lack of levers through which experts and civil society can influence policy-making. According to Dr. Marion Mehring, in order to make the transition from knowledge to action, the relevant actors need a combination of skills (knowledge and competencies), motivation (personal attitudes) and opportunities (experiential spaces).

It takes a holistic perspective

The experts agreed that the issue could only be successfully addressed with a holistic perspective. For instance, biodiversity aspects must also be increasingly taken into account in areas that are not designated as protected areas - this applies above all to urban areas, where greening plans must become an integral part of planning processes. In addition to biodiversity, it is important not to neglect other environmental assets such as soil or air. Furthermore, the integration of topics such as health care, nutrition and consumption, and agriculture offers opportunities to think more broadly about the issue and, at the same time, to promote biodiversity conservation.

Future: The term "Future" has long become a central concept in environmental and sustainability policy debates. Whereas in the past threat scenarios dominated the debate, today the focus is increasingly on the possibilities for shaping the future: What kind of world do we want to make possible for present and future generations?

Forum: Shaping an ecologically sustainable and socially equitable future can only succeed through conversations between politics, science, business and civil society. Ecornet aims to bring together the various actors and offer them a forum for jointly tackling the social problems of our time.

Ecornet: Concrete social problems require concrete proposals for solutions. Ecornet aims to help shape social change towards sustainability and to provide the required scientific basis for this purpose. With thematic and methodological diversity and work at the interfaces between science and society, the eight Ecornet institutes provide answers to the pressing questions of our time.

Ecosystem restoration in the age of drastic biodiversity decline. 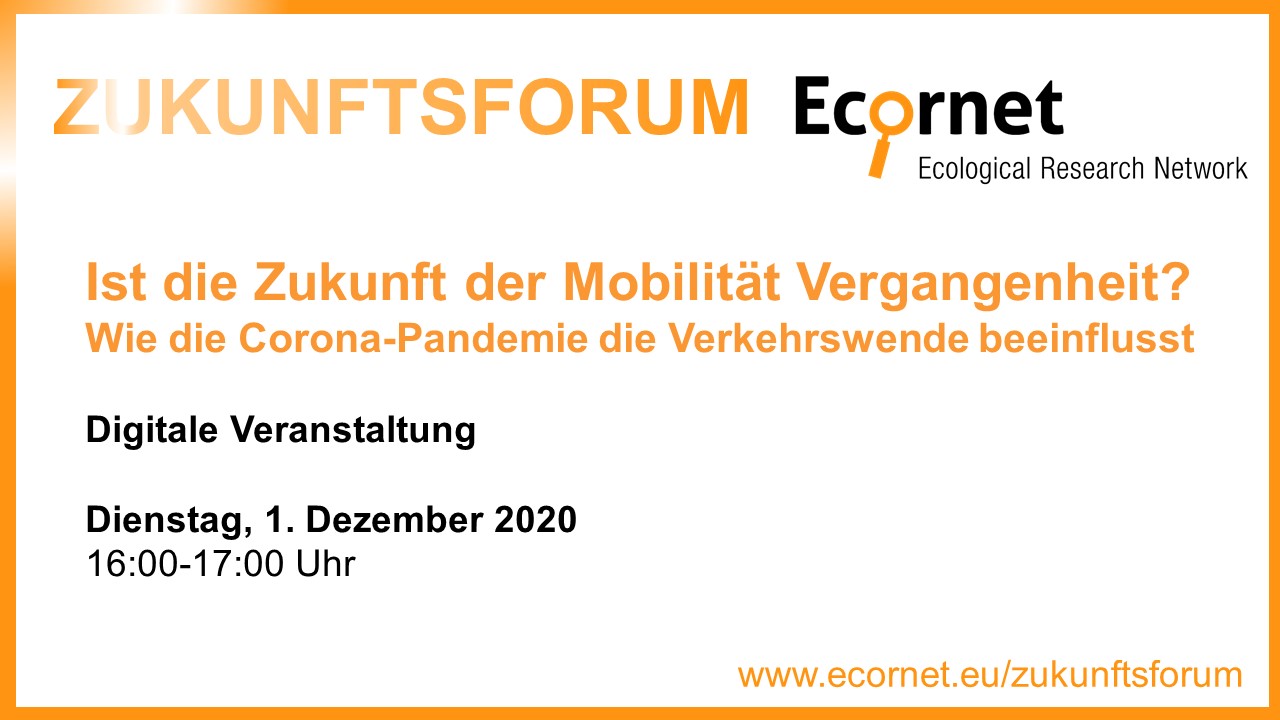 The restrictions associated with the Corona pandemic have suddenly changed the behavior of traffic participants. As a result, significant numbers of people have taken to cycling and walking. Public transport, on the other hand, is in crisis. The need for social distance... Read more

Discussion:Is the Future of Mobility the Past? 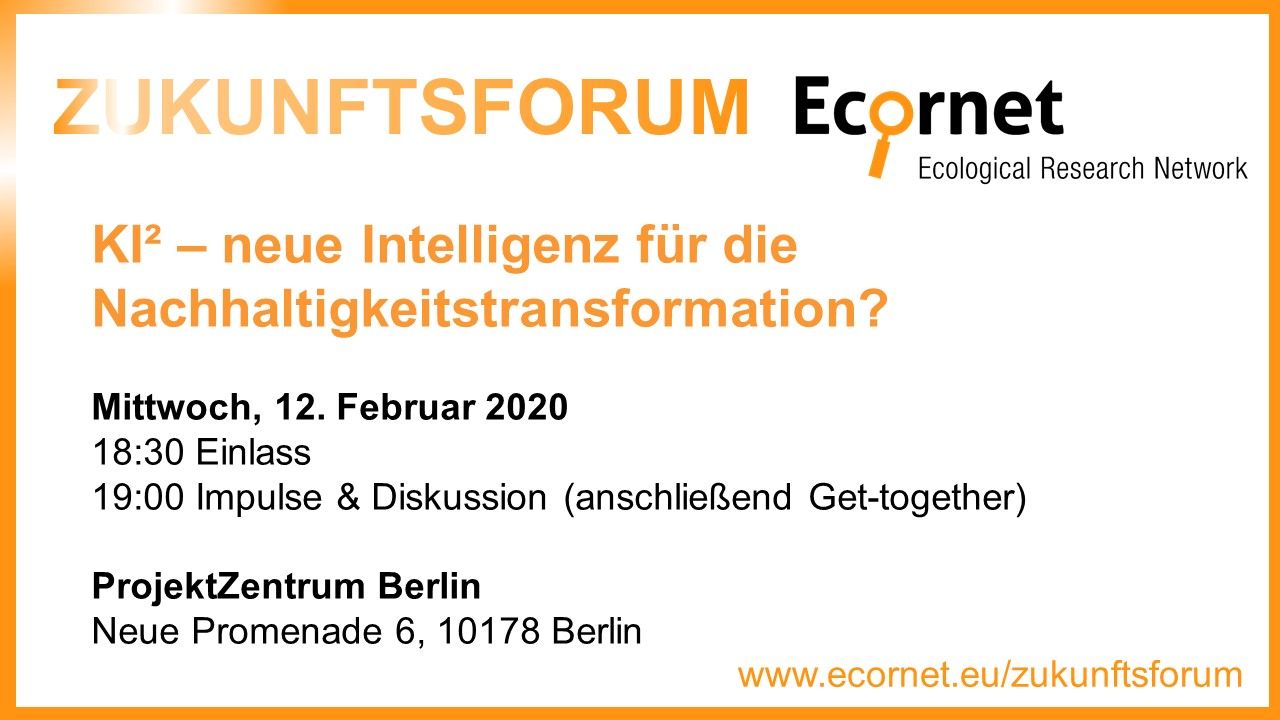 Hidden in plain sight, digitalisation has appeared as one – if not the – central force of change in the 21st century. The digital age offers the potential to both enable and radically counteract the socio-ecological transformation. Correspondingly, structuring the... Read more