The continuing loss of biological diversity will cost the global economy up to 14 trillion Euros by 2050, which is equivalent to 7% of the projected global GDP in 2050. This is the result of a study on the cost of policy inaction (COPI) with regard to the EU’s 2010 biodiversity target. Ecologic contributed to the assessment by establishing a comprehensive inventory of economic valuations of biodiversity and ecosystem services. The study was presented on 29 May 2008 at the Ninth Meeting of the Conference of the Parties (COP-9) to the Convention on Biological Diversity (CBD) in Bonn. It is part of a large-scale review on The Economics of Ecosystems and Biodiversity (TEEB).

So far, a considerable amount of global biodiversity – over 40% of our forests, 50% of wetlands, 35% of mangroves, and 20% of coral reefs – has been lost, resulting in reduced flows of associated ecosystem services. The cost of policy inaction can be defined as the environmental damage occurring in the absence of an effective regulatory framework.

The COPI study and the wider review on The Economics of Ecosystems and Biodiversity (TEEB) are part of the European Commission’s commitment to strengthen understanding and communication of values of natural capital and of ecosystem services. The aim is to take account of these values in the policy framework and to expand incentives for people to safeguard biodiversity. This commitment was expressed in the Communication from the Commission on halting the loss of biodiversity by 2010.

The study develops an integrative methodology of analysis and synthesis, based on well-known and widely accepted frameworks of analysis. An exhaustive inventory of the current state of economic valuations of biodiversity and ecosystem services and an analysis of future impacts and values with internationally accepted scenarios are the core of the methodology.

In phase 2 of the study, which takes place within the wider TEEB assessment, further work has to be done. As of now, the core COPI numbers show only part of the global picture. Losses of ecosystems and biodiversity in other geographic areas and biomes, which have not been part of the first COPI assessment, require in-depth analysis. There is a need to fill information gaps on ecosystem service values, amongst others for freshwater protection and regulation, soil formation and quality, natural hazards control and bioprospecting. 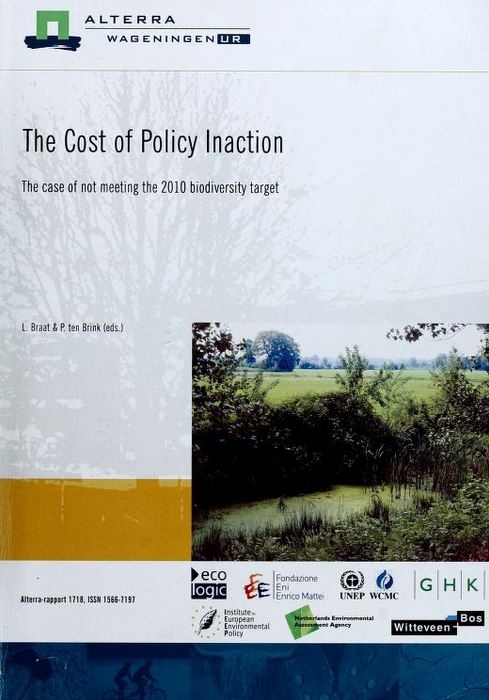 The Case of not Meeting the 2010 Biodiversity Target

Convention on Biological Diversity
• 9th Meeting of the Conference of the Parties to the CBD
Source URL: https://www.ecologic.eu/2363