Under the impression of manifold ecological crises in the course of the 1960s and the emerging civil society environmental movement in North America and Great Britain, the Environmental Program was launched after the government declaration in 1969. It was, on the one hand, an immediate reaction to current ecological problems and, on the other hand, a bridge to the emerging international environmental policy that led to the United Nations Conference on the Environment in 1972.

The environmental program and its volume of material present the priority environmental issues of the 1970s as if in a burning glass. On the one hand, the far-sightedness of the need for action in water and marine protection, even beyond the national level, or on questions of environmental chemicals and biocides are remarkable. On the other hand, from today's perspective, the views on nuclear energy or factory farming are shocking. In addition, the environmental program proclaims the necessity of interdepartmental work, establishes international connections, and acts in a solution-oriented manner by linking measures and actors with the impetus of modernization and the social dimension of the environmental issue for the common good and the national economy, human dignity and human rights.

At the same time, the historical document makes it possible to understand deficits that environmental policy still has to deal with today and to draw conclusions and recommendations for action for future environmental policy at a time when a young generation of climate activists is vehemently advocating for intergenerational justice relations in a currently catastrophic environmental situation.

Project
In Germany, environmental policy began to form as an independent policy field in the late 1960s. A major milestone in the history of German environmental policy was the adoption of the Federal Government's first environmental programme in 1971. Ecologic Institute supports the BMU (Federal Ministry for the Environment, Nature Conservation and Nuclear Safety) in the review of this historical event. 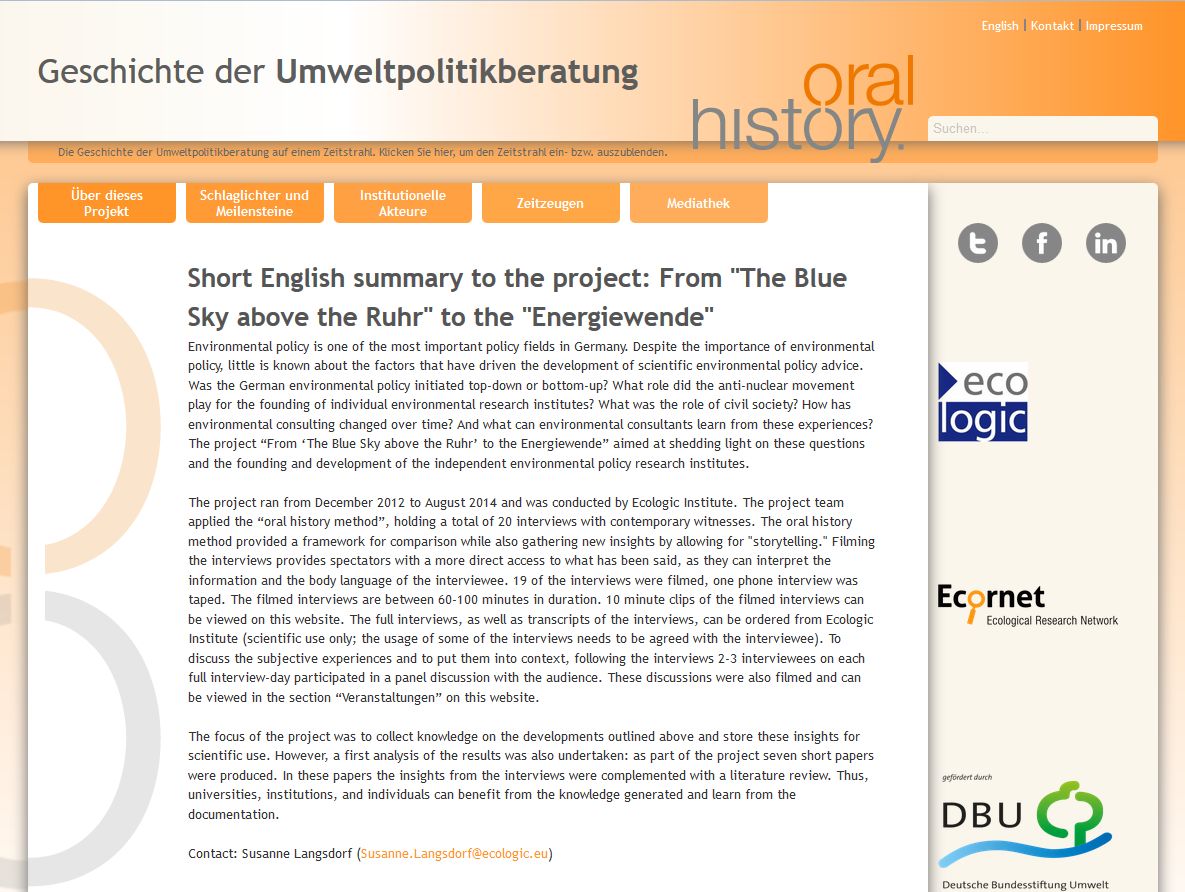 The project "From 'The Blue Sky above the Ruhr' to the Energiewende" aimed at shedding light to the factors that have driven the development of scientific environmental policy advice in Germany. The project team applied the "oral history method", holding a total of 20... Read more

EventWorkshopOral History: The Beginning of Environmental Policy Consultancy in Germany
Prof. Dr. Martin Jänicke
Prof. Dr. Martin Jänicke was one of Willy Brandt’s helpers in his 1969 election campaign, was co-founder of the German Green Party, has founded—together the with Lutz Mez—the Environmental Policy Research Centre (FFU) at the Free University of Berlin, and has thus taken... Read more