Looking back with a view to the future: Celebrating the 30th anniversary of the Environmental Ministry in Baden-Wurttemberg, Minister President Kretschmann and Minister for Environment Untersteller together with keynote speakers Prof. Schneidewind (Wuppertal Institute) and Dr. Bausch (Ecologic Institute) highlighted achievements of the past as well as challenges for the future. While past efforts delivered some important results, current and future trends show the need for far-reaching changes in the way we live and do business.

Under the motto "Unterwegs in Sachen Zukunft" [On the Road to the Future] the speakers examined international, national and sub-national dimensions of past and future environmental policies with a special focus on dynamics and circumstances in Baden-Wurttemberg with its extensive natural landscapes and high levels of industrialization.

In their opening remarks, Winfried Kretschmann (in a special video message) and Franz Untersteller highlighted in particular challenges of climate change (and the related need for the energy and mobility transition), of biodiversity loss (and its relation to agricultural practices), as well as of increasing resource scarcity (and the related needs for efficiency and recycling).

Looking 30 years ahead, Prof. Schneidewind outlined eight areas of upcoming change, including digitalization, the need for "exnovation" instead of innovation (meaning the need to stop using certain harmful or wasteful technologies), new welfare models, and the need for experimental and participatory approaches to policy development.

Dr. Bausch addressed "Environmental policy for, with and through people – what can be learned from three decades of climate and energy policy?" As a normative basis she started with philosopher Hans Jonas’s principle of morality: "Act so that the effects of your action are compatible with the permanence of genuine human life". Looking at the status quo she referred to the set of "planetary boundaries" as established by Johan Rockström and colleagues. These scientists found that humans already overstep these boundaries in areas like climate change and biodiversity. We as humans are evidently living beyond our means and have to act boldly and swiftly to comply with the above-mentioned principle.

Building on this premise, Dr. Bausch depicted some examples of how changes were achieved with citizens. She explained how the German Feed-In-Law (EEG) of the year 2000 created a way for citizens to become renewable electricity entrepreneurs. As a consequence, the market and energy mix in Germany changed fundamentally. Furthermore, Bausch pointed to the successful climate conference in Paris in 2015, during which the French Presidency defined the contributions of non-state-actors as a "fourth pillar" of its approach. This new pillar – i.e. the contributions and pledges of cities, citizens, artists and others – was and is crucial to make Paris a success.

On the other hand, not all processes have proven to be harmonious. Sometimes citizens have driven policy makers to act. In this context, Bausch chose two examples from Baden-Wurttemberg: First, the anti-nuclear movement of the citizens of Whyl, which not only prevented a nuclear plant in Whyl, but also helped spark a national anti-nuclear movement and the founding of independent environmental Think Tanks. Second, Bausch explained how the "energy rebels" of Schönau were able to buy – against all odds – the local grid and become an independent provider of renewable energy.

In conclusion, Bausch underlined the value of knowing history in order to develop promising pathways for the future. She exemplified how change and transformation builds on the action of many who are often incentivized by a broad variety of reasons. She also showed how successful action is not only a result of being persistent and surmounting difficulties, but also how it can inspire further action – even across borders.

Following these explorations, Dr. Bausch was joined on the panel by Franz Untersteller, Dr. Brigitte Dahlbender  (Friends of the Earth Germany (BUND)), Dr. Erwin Vetter (inaugural Environmental Minister of Baden-Wurttemberg) and Dr. Stefan Wolf  (ElringKlinger AG and Südwestmetall) to discuss the question "Quo Vadis Environmental Policy". There was consensus that action on issues like climate change and biodiversity is urgently needed, that transformative changes are to be expected in the rather near future and that business cannot only be part of the problem, but also contribute to the solutions and innovations needed. It was also underlined that success in coping with the challenges has to be measured by the concrete action taken – by policy makers, business and each individual – and the ensuing results.

After the formal part of the event, the high-level guests from government, civil society, academia and industry gathered over a glass of wine to celebrate the occasion.

The future has a past – Dr. Camilla Bausch gives keynote address at 30th anniversary of the Environmental Ministry, Baden-Wurttemberg 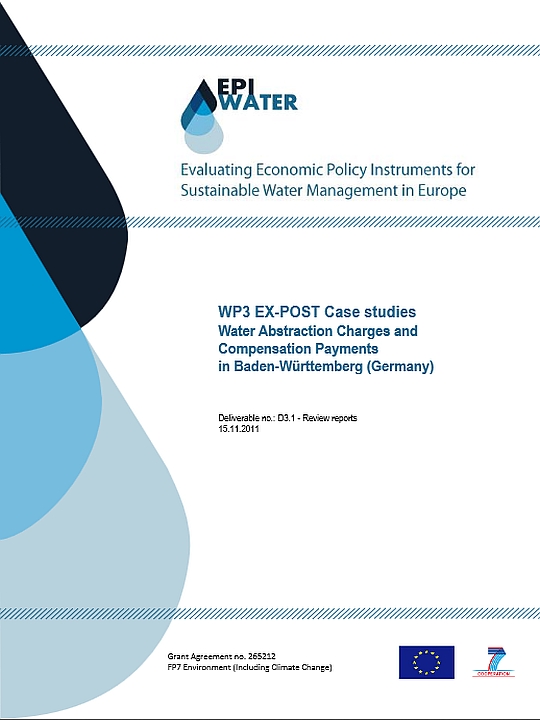 This case study conducted by Ecologic Institute analyzes the policy mix of economic and regulatory instruments introduced in the German state of Baden-Württemberg in order to address two key water management problems: excessive nitrate concentrations in groundwater and... Read more

ProjectAdvancement of Klimaschutz-Plus in Baden-Württemberg
| Fotolia © lucadp
The state of Baden Württemberg developed a new climate policy in 2013. This changes the preconditions for the funding scheme Klimaschutz-Plus an important part of the state's climate policy. The Institut für Energie- und Umweltforschung Heidelberg (IFEU) and the... Read more