The state of Baden Württemberg developed a new climate policy in 2013. This changes the preconditions for the funding scheme Klimaschutz-Plus an important part of the state's climate policy. The Institut für Energie- und Umweltforschung Heidelberg (IFEU) and the Ecologic Institut supported the Ministry of Environment Baden-Württemberg to update the support program Klimaschutz-Plus. Throughout the project, cooperation with the applicants and recipients of funding  as well as with the program's coordinators was be a major focus of this project.

Since 2002 the state Baden-Württemberg promotes investment in energy refurbishment of buildings and energy efficient building technology with the Klimaschutz-Plus program. The support aims at local authorities, clubs, societies, clerical institutions as well as companies. The support program is operated by the L-Bank and the Klimaschutz- und Energieagentur Baden-Württemberg (KEA).

In 2013 Baden-Württemberg decided on a climate protection law (Klimaschutzgesetz, KSG), committing to reduce its greenhouse gas emission by 25% till 2020. With this law the state laid the foundations to design a plan on  specific aims, sectors and implementation measures, the Integrated Energy and Climate Concept (Integriertes Energie- und Klimaschutzkonzept, IEKK). With this concept the state develops the measures necessary to reach the 25% goal, including the modernization of the energy network or the increase of the renewable energy share to 86% till 2050.

Also, new funding schemes for investments in energy efficiency were established on the federal level and changed the legal framework for Klimaschutz-Plus. The project partners analysed the policy changes and embeded the Klimaschutz-Plus program in Baden-Württemberg's climate policy.

Klimaschutz-Plus aims at stakeholders (local authorities, clubs, clerical institutions and businesses) which are role models in reaching the climate target. To allow the stakeholders to fulfil this role, Klimaschutz-Plus needs to evolve in close coordination with them. This will ensure that the program will continue to support them as good as possible to reach the 25% emission reduction target. To do so the project partners analyzed if Klimaschutz-Plus could be used to assist other funding schemes or if redundancies exist. These findings were examined in light of the measures set out in the IEKK. The results of this analysis were used by the IFEU, Ecologic Institut and the Ministry of Environment Baden Württemberg to develop new ideas to advance Klimaschutz-Plus. These suggestions were discussed with the involved stakeholders.

Ecologic Institut and the IFEU supported Baden-Württemberg to reach these goals. Together both Institutes defined the legal framework, elaborated the ideas of the local stakeholders, coordinated the project communication and analyzed other support programs. The communication with the local stakeholders was arranged in consecutive steps. A workshop with employees of the L-Bank and the KEA was organized to find ways to enhance internal communication. Also first results were discussed with potential recipients. Finally, a workshop was held towards the end of the project to present and discuss final results. 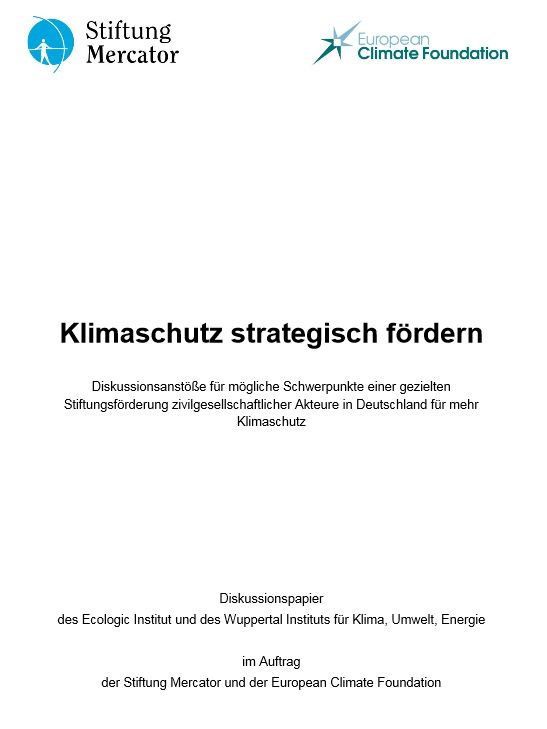 PresentationChairingMasterplan 100% Climate Protection
Die Referent/innen des Forums Masterplan 100% Klimaschutz: Vom Konzept zur Wirklichkeit.
On 11 and 12 November 2014, stakeholders and decision-makers, including municipalities, businesses, and scientists, met at the congress "100% Renewable Energy Regions" in Kassel to exchange best practices for the energy transition. In a forum on the "Masterplan 100%... Read more

Speech:Soil Carbon Management for Climate Change Mitigation and Adaptation: Framing and Integrating the Issue in the Evolving Policy Environment