In order to support the impact assessment of the EU's Communication on Water Scarcity and Droughts (July 2007), Ecologic Institute analysed Europe's water saving potential by 2030. The study addresses the savings that can be achieved via technical measures without major changes in human behaviour or production patterns. Depending on the sector analysed (Agriculture, Tourism, Households, Energy and Industry), potential water savings up to 90% were identified. The study is available for download.

Due to the increase in droughts and long-term imbalances of water supply in Europe, concern about water availability and the need for water saving in Member States has been rising.  An in-depth assessment carried out by the European Commission in October 2006 revealed that current water management practices have a large margin for improvement, especially with respect to water saving potential.  In this context, this project supported the Impact Assessment of the July 2007 Communication on Water Scarcity and Droughts by analysing and quantifying the EU water saving potential by 2030.

There is a wide range of technical measures to save water in the domestic sector (including households, public sector organisations and small businesses). Leakage reduction of the water supply system, water saving devices and more efficient household appliances allow large savings up to 50%.  Many of these water saving technologies can be easily introduced and have short payback periods, which make water saving also economically feasible for private households and public administrations.  Additionally, rain water harvesting has the highest saving potential (up to 80%) but is rather expensive.  With an average EU water consumption of 150 l/person/day, applying the technical measures mentioned above would help reduce water consumption to 120 l/person/day and 80l/person/day resulting in water savings ranging from 18% to 47% of today’s water consumption.

For the industry sector, data gaps made it difficult to come up with sound numbers with respect to saving potential. Industries that use large amounts of water include the paper & pulp, textile, leather (tanning), oil and gas, chemical, pharmaceutical, food, energy, metal and mining sub-sectors. Technical measures mainly focus on changes in production leading to less water demand, higher recycling rates or the use of rainwater. Depending on technologies used, water savings range from 15% to 90%.  It still remains unclear whether those who already embarked on water saving strategies have already captured all their water saving potential. Closing these gaps by making assumptions as set out in section 8.4, total water savings amount to 14 655 Million m3 per year today, leading to total water savings of 28 580 Million m3 (43% of total) in 2030.

A particular sub-sector of industry is electricity production. Electricity production abstracts large quantities of water for abstracting fuel and for cooling purposes in thermoelectric power plants. By examining figures for water use, it is clear that the theoretical technical saving potential is up to 100%, as modern oil and gas thermoelectric power plants do not need water at all and some Member Sates have decided to withdraw from nuclear power plants. A more realistic saving ranges between 68% and 88% depending on the water consumption of new plant technologies (e.g. to convert biomass) and the replacement of nuclear power plants by more modern plants or the degree of change towards non-nuclear thermoelectric plants.

The tourism sector does not represent a key water use sector in Europe overall. However, regional differences make tourism a key sector in some regions. Technical water saving measures that can be considered for the tourism sector are similar to those presented for households. Since some of the measures identified in the report show a potential for a maximum of 80-90% savings, tourist accommodations could considerably reduce costs by buying more efficient appliances with payback periods of 3 years or less. Calculating the water savings for the tourism sector remains the most difficult part, as little information is available and the future development of this sector is not clear. Based on the limited information available, a saving potential of 188 million m3 per year has been estimated for today’s situation.

The study can be downloaded in two parts: 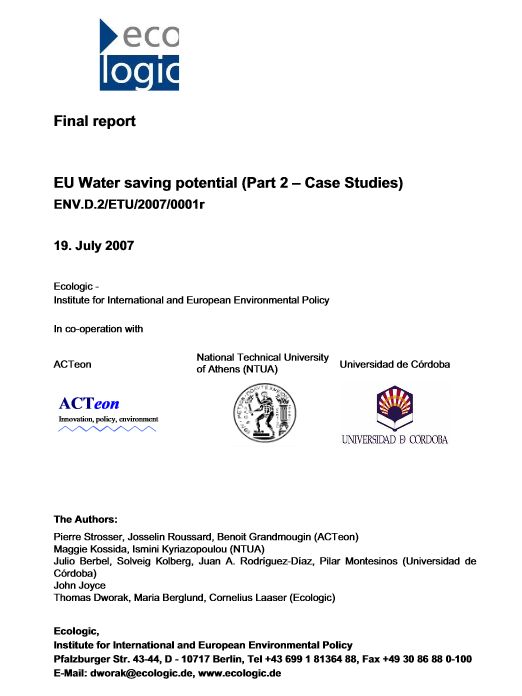 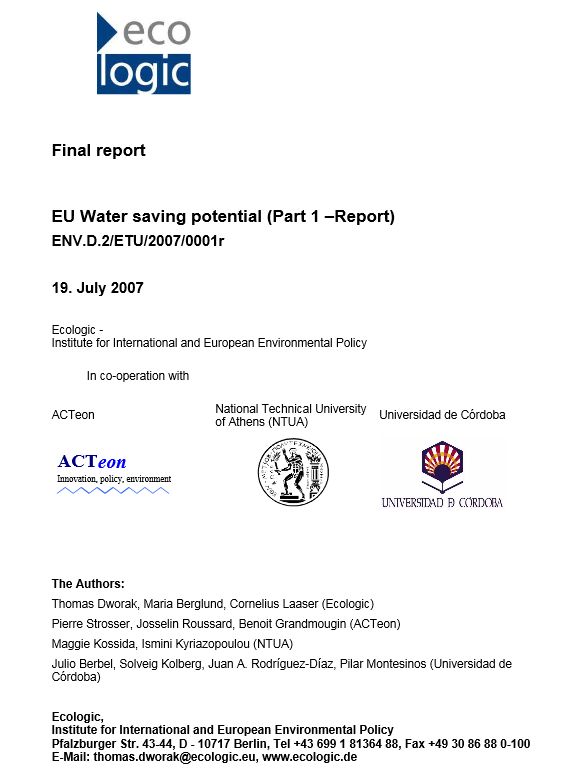