There is still no specific soil protection law at EU level. In 2014 the European Commission withdrew its 2006 proposal for a soil protection directive, after two unofficial compromise proposals of 2010 and 2011 failed to secure an agreement. The project analyses and compares the three proposals, because they represent the course and state of play of the political debate and could play a role in the event of  new political initiatives. A legal analysis shows commonalities and differences between the soil protection requirements of the proposals and German soil protection law. The study also examines the potential cost for the Federal and State level to gather the necessary data if there was an obligation to identify and determine risk areas according to certain criteria. The project also analyses to what extent EU laws and instruments regulate or have an impact on soil protection, and provides an assessment if and how soil protection standards could be incorporated or added.

In 2014 the European Commission withdrew its proposal for a soil protection framework directive (SFD) which had been in political limbo since its publication in 2006. Besides the official Commission proposal, two compromise proposals were developed in 2010 and 2011 but did not lead to an agreement. The Commission is now considering how soil quality issues can be addressed in a binding legal framework, and to potentially make new proposals.

Therefore the project, which had originally been focused exclusively on the expected SFD, was adapted: Work packages 1 and 2 analyse the three proposals, because they represent the political debate’s stages and state of play. Work package 1 is a legal analysis and shows common features as well as differences regarding soil protection between the proposals for a soil framework directive and German soil protection law. Work package 2 addresses those provisions in the three proposals that oblige the Member States to identify and determine risk areas for soil threats by certain criteria. It analyses the potential cost of collecting the data, at Federal level or State level, if the proposed rules had been or were to be applied in future. Work package 3 provides an overview of the contribution of existing EU laws and political guidance to soil protection. The objective of this project is not to discuss the need, political relevance or thematic focus for an EU soil directive.

The Ecologic Institute led the project and was supported by the  Prof. Burmeier Ingenieurgesellschaft mbH (BIG) und the Leibniz-Zentrum für Agrarlandschaftsforschung (ZALF e.V.). 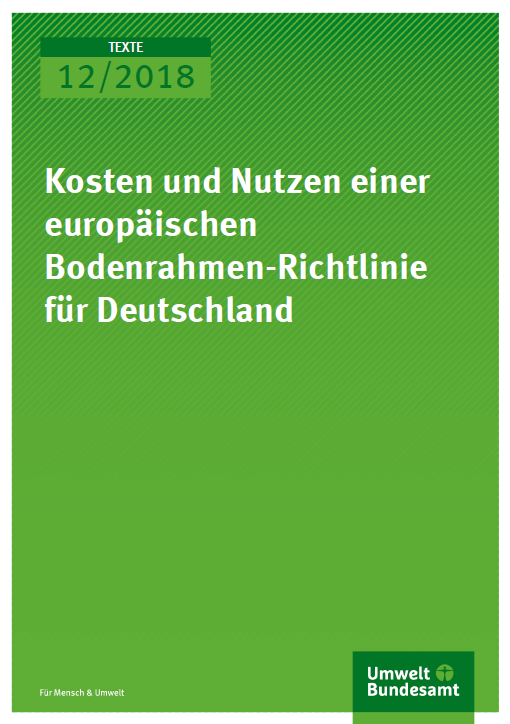