What shape will the future governance framework of European climate and energy policy take? The proposal submitted by the European Commission at the beginning of this year raises more questions than it answers in this regard. Dr. Camilla Bausch and Christine Lucha of the Ecologic Institute invited experts to a workshop to discuss the meaning of the commission's suggestions with a particular view toward electricity infrastructure. All presentation slides are available for download.

Commission proposal for a 2030 climate and energy package

In early 2014, the Commission published suggestions for the potential structure of a climate and energy package through 2030. Part of that package is an EU-wide renewable energy goal that is connected to a suggested new governance by which Member States create new energy plans in consultation with their neighbours based on commission guidelines. Those plans would include intended infrastructure changes, such as new electricity interconnections. Further, the new governance framework would strengthen regional approaches for e.g. joint decisions to build new interconnections, fostering cross-border cooperation and thus cost effectiveness as well as grid stability. In March 2014 the European Council announced it would conclude the political framework for the future climate and energy package by October 2014, thereby placing the issue back on its agenda in June.

The role of governance remains open, but the expansion of cross-border electricity infrastructure is clearly being attributed higher significance: by June, the Commission will suggest specific objectives necessary for member states to meet the target of achieving interconnection of at least 10% of their installed electricity production capacity.

Given the open questions regarding the future and structure of the new governance, the Ecologic Institute's expert workshop provided a discussion venue to discuss options and implications from various perspectives under Chatham House Rules, focusing on transboundary infrastructure in the electricity sector.

The roughly 20 participants from academia, government, civil society and business enriched the discussion with multifaceted expertise and identified points to be further studied and developed. In particular it became clear that although infrastructure measures are currently not at the center of political discussions around the 2030 package, they are essential for the expansion of the internal power market and renewable energy. Planning security and acceptance of infrastructure projects within the local population was identified as a key challenge – there is however room for discussion on what a new governance could contribute in this area, and to what degree existing fora and monitoring systems can be better used. Some participants emphasized that a new governance could offer opportunities to cooperate on national infrastructure plans in order to overcome conflicts of interest in cross-border measures. It could also provide greater transparency and investment security for the relevant projects. On the other hand, this type of governance could be associated with significant coordination time, effort, and conflict potential because the fundamental problem – Member States' focus on their national interest and not on European goals – seems unsolvable even with a new governance.

The fundamental problem – Member States' focus on their national interest and not on European goals – seems unsolvable even with a new governance.

Scientific & Executive Director, Ecologic Institute Europe
Board Member
Previous Pause Next
Event:Workshop
What shape will the future governance framework of European climate and energy policy take? The proposal submitted by the European Commission at the beginning of this year raises more questions than it answers in this regard. Dr. Camilla Bausch and Christine Lucha of the Ecologic Institute invited experts to a workshop to discuss what impact the new EU Governance has on the electricity sector and how to design the requested regional cooperation.

New EU Governance in the Energy Sector - What can be learned from Projects of Common Interest (PCIs)? 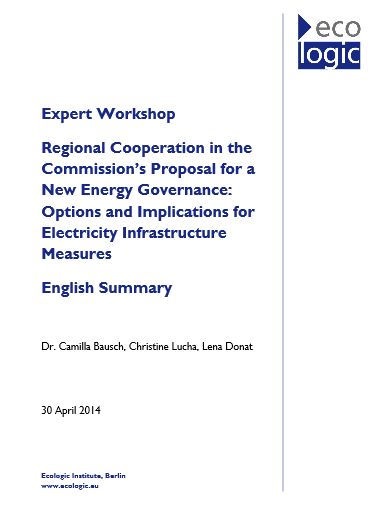 On 30 April 2014, Ecologic Institute hosted an expert workshop on the significance of the European Commission's proposed new energy governance, focusing on options and implications for electricity infrastructure measures. Twenty-one participants including policy makers as well as representatives of civil society, academia and business discussed possible requirements of, approaches to, and effects of such new measures through a set of structured questions and impromptu presentations. The summary is available for download.

Regional Cooperation in the Commission's Proposal for a New Energy Governance

German Perspectives on the Idea of an Integrated Offshore Grid

Workshop:The Relevance of Cross-Border Electricity Grids on the North and Baltic Seas for Offshore Wind Energy in Germany

MILESECURE 2050 explores and evaluates the multidimensional process leading to European low-carbon energy security. Taking a perspective to 2050, the project will increase knowledge about the drivers of and barriers to societal and individual transition processes as... Read more