The 21st Conference of the Parties (COP21) to the United Nations Framework Convention on Climate Change (UNFCCC) was held in Paris from 30 November to 11 December 2015. Ecologic Institute  supported the negotiations via its legal expertise and also presented the results of different research projects at COP side events.

Dr. Ralph Bodle and Lena Donat of Ecologic Legal participated in the climate summit negotiations by supporting the German delegation within the context of two projects. During the UN climate negotiations Ralph Bodle dealt with legal aspects of climate finance and the post-2012 climate regime. Lena Donat was involved in the international negotiations on climate change by providing legal analysis and advice to the German Federal Ministry for the Environment, Nature Conservation, Building and Nuclear Safety (BMUB).

Within the context of the project Mobilizing and Transferring Knowledge on post-2012 Climate Policy Implications (POLIMP), Ennid Roberts, Researcher at Ecologic Institute, participated in an official EU side event, which took place during COP21 on 1 December 2015 in the EU Pavilion.

Side Event: Economics of Climate Change Adaptation in Europe (ECONADAPT)

Dr. Josselin Rouillard, Fellow at Ecologic Institute, gave a presentation at the ECONADAPT Side Event "Economics of Adaptation", which took place on 2 December 2015 in the EU Pavilion.

BMBF Side Event: From Research to Decision Making

Dr. Grit Martinez, Senior Fellow at Ecologic Institute, was invited by the Federal Ministry of Education and Research (BMBF) to give a presentation at the Side Event "From research to decision making", which took place on 3 December 2015 in the German Pavilion.

EU Side Event: Post-carbon Cities as Drivers for Decarbonisation (POCACITO)

Max Grünig, President of Ecologic Institute US, presented research results on the project Post-Carbon Cities as Drivers for Decarbonisation (POCACITO) in the context of an EU side event, which took place in the EU Pavilion.

Side Event: A Best Practice Platform to Support the Transition Towards a Green Economy (GreenEcoNet)

Within the context of the project A Best Practice Platform to Support the Transition Towards a Green Economy (GreenEcoNet), Terri Kafyeke  participated in an official EU side event, which took place on 9 December 2015 from 6.30pm – 8pm in the EU Pavilion.

Dinner Debate: The Politics of Energy Transition in Poland, the Czech Republic and Germany

Dr. Camilla Bausch was invited by ENGIE to speak about effective evolutions of domestic carbon pricing mechanisms at an official side event on 8 December 2015.

Further information about the scheduled meetings and planned side events is accessible on the UNFCCC website. 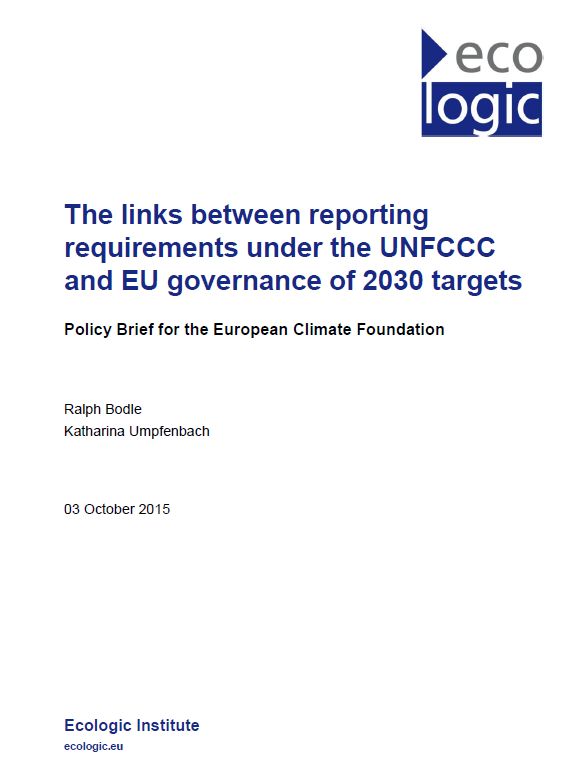 Both at the international level and in the European Union, governments are currently negotiating future approaches to mitigating global climate change. In both arenas, a key question is how the institutions will follow-up on the implementation of agreed targets and... Read more

Bodle, Ralph and Umpfenbach, Katharina (2015): The links between reporting requirements under the UNFCCC and EU governance of 2030 targets. Policy Brief for the European Climate Foundation, Ecologic Institute, Berlin.