In 1980, Sweden decided to phase out nuclear energy. In 2004, however, an IEA study showed that Sweden had the highest production of nuclear energy per citizen, whereas the use  of wind power potential, for instance, was only recently seriously furthered.  Ecologic brings critical light to the inconstant swedish energy policy, and their effects on nuclear and renewable power.

Regarding the discourse in Germany concerning nuclear as well as renewable energy, and the modernisation of the electricity sector, international energy policy comparisons can deliver new thoughts and arguments. The Swedish energy policy lends itself for such a comparison, especially due to a high share of renewable electricity in overall energy production and the 1980 decision on the nuclear phase-out.

The success of the Swedish phase out so fare is very limited. The goal to stop nuclear energy production by 2010 can no longer be reasonably pursued. The shut-down of the first nuclear power reactor took place only in 1999, followed by a second one in 2005. As of this moment, it is not foreseeable when the 10 still running reactors will be shut down. Neither a short nor a medium term phase out are regarded as realistic options under the current conditions – particularly due to the lack of an agreement over remaining running time.

The inconstant phase-out policy, together with a temporally limited promotion of renewable energies, did not foster investment in renewable energy in Sweden, outside of great water power. Sweden’s proportion of renewable electricity to their overall power production was approximately 47 percent in 2002 and 40 percent in 2003. This large proportion is well above the European average of 13 percent. However, a large percentage of that renewable energy comes from water power, while the potential for wind power has not yet been fully utilised. The output of wind energy is below the European average, despite Sweden having favourable geographic conditions.

The study points out, that the previous promotion strategies for renewable energies (outside of great water power), have not produced noteworthy success. The system is lacking long term considerations, consistency and coherence.  Also the 2003 adopted quota model, which is based on so-called green certificates, has not, as of yet, led to a recognisably strong increase in renewable energy. The results might only become apparent in the medium-term, but despite that, with a duration until 2010, also the new model does not facilitate investment security. The extension of the quota model is thus discussed. Altogether, though, the inconstant Swedish energy policy and their unfavourable effects on the security of supply and investment climate is internationally criticised.

The study [pdf, 637 KB, German] is now available for download. 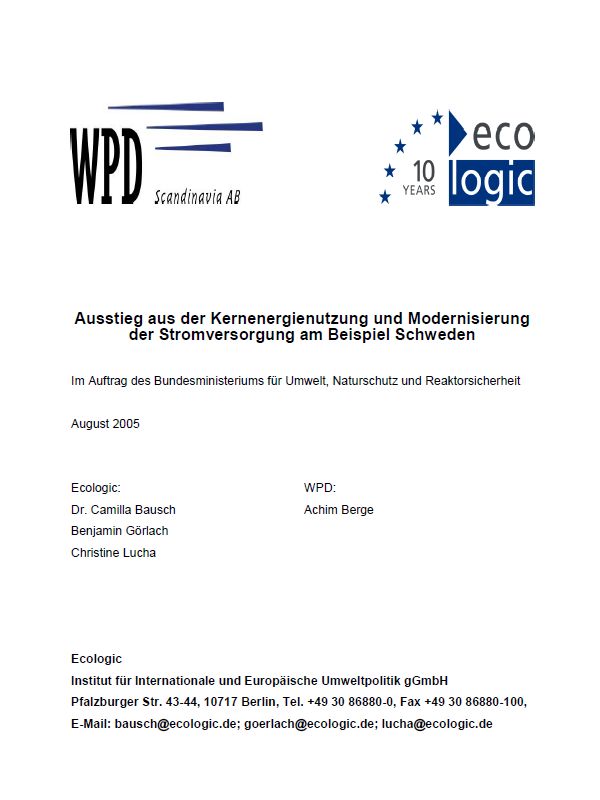