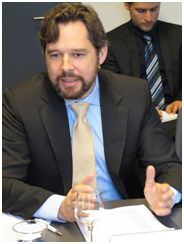 Photo: © The German Marshall Fund of the United States
Print

Organized by the Heinrich Böll Foundation and the German Marshall Fund of the United States, the off-the-record event featured decision makers from the European Commission and the United States Mission to the European Union as well as various affected stakeholder. Presenting an early draft of a policy paper commissioned by the Heinrich Böll Foundation, Michael Mehling of Ecologic Institute in Washington DC kicked off a discussion focused on identifying ways to promote rapprochement across the Atlantic through stakeholders interested in constructive engagement and a cooperative outcome.

Since 1 January 2012, emissions from aircraft flying to and from airports in the European Union have been covered by the European Union emissions trading system (EU ETS). Because the scope of this measure extends to foreign air carriers, it has given rise to substantial controversy across the Atlantic. Outraged at this unilateral initiative, U.S. policy makers have censured the European measure and passed legislation in Congress that prevents American air carriers from complying with the EU ETS. Concern is growing that this conflict will further escalate and seriously damage relations between Europe and the United States.