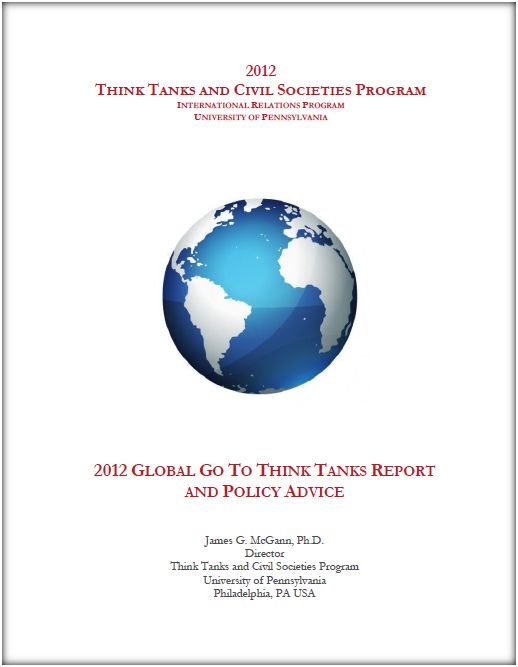 For the third year running, Ecologic Institute was voted into the Global Top Ten Environment Think Tanks in the prestigious Global "Go-To Think Tank Index," conducted by the University of Pennsylvania. Ecologic Institute—based in Berlin, Germany, and Washington, DC—continues to be the only environmental Think Tank ranked among the Top 75 Think Tanks in Western Europe, where it rose from 37th place in 2011 to 33rd place in 2012.

The category "Environment" was dominated by US-based Think Tanks, with 7 positions in the Top 10, and the World Resources Institute (WRI) leading the table.  The Stockholm Environment Institute (SEI) from Sweden (6th), Chatham House in London, England (9th), and Ecologic Institute as an international organization under German flag in 10th place complete the Top 10.  Chatham House is also the Top Think Tank in the World (outside the United States).

/"We are delighted that Ecologic Institute was again voted into the Top 10 of Global Environmental Think Tanks and improved its ranking in the field of all European Think Tanks.  But we are also concerned about the low scores accorded to environmental Think Tanks.  No other such Think Tank is on the list for Western Europe, and none on the list for Central and Eastern Europe, which shows the low priority given to environment, climate, resources, and sustainable development," said R. Andreas Kraemer, Director and CEO of Ecologic Institute Berlin (Germany).

Michael Mehling, President of the legally and financially separate Ecologic Institute in Washington, DC (EIUS), added: "I am pleased that our transatlantic work has once again found recognition in a category otherwise dominated by North American Think Tanks. Being able to create a bridge for environmental policy between Europe and North America is something we are proud of, and our strong presence in both regions has been an important factor."

Turning to the global situation, Michael Mehling said: "An encouraging trend reflected in this year's ranking is the rapid growth and growing influence of Think Tanks in the developing world. Demand for independent information and analysis in these countries is a sign of an empowering civil society, and that is vital for robust, legitimate environmental policies. For us, this trend brings opportunities for cooperation, but also a responsibility to assist new actors by sharing best practices and output."

Pamela Lesser, who observes the role of Think Tanks in Brussels, noted: "Few Think Tanks in the geographical categories 'Western Europe' and 'Eastern Europe' truly understand how the European Union works. Think Tanks that focus on EU policy-making and play a role in Brussels are really a class apart, because of their focus and the way they interact with the specific policy processes in the EU. That should be recognized in the Think Tank Index."

Sascha Müller-Kraenner, one of the founders of Ecologic Institute, says that: "The growing influence and recognition of Ecologic Institute is a credit to the dedication of its expert staff, who are consistently able to identify and analyze new challenges and formulate effective responses.  As a board member, I am particularly pleased to see progress in outreach to China and the building of partnerships so we can address the most pressing development issues today".

Launched in 2006, the University of Pennsylvania’s annual “Global Go To Think Tank Rankings” report has become an authoritative source of the top public policy research institutes in the world. The newest rankings are based on a 2012 worldwide survey of 1,950 scholars, journalists, policymakers and peers from approximately 120 countries. The panel received over 57,000 nominations and ranked 6,603 Think Tanks from every region of the world.

According to Prof. James G. McGann, Director of the Think Tanks and Civil Society Program at the University of Pennsylvania, as well as the one who compiled the survey, the purpose of the rankings is to highlight the important work that Think Tanks perform for governments and civil societies around the world, often in dangerous and difficult conditions. His report provides a comprehensive, global ranking of the world’s top Think Tanks from every region of the world – 183 countries; the report is an insider’s guide to the global marketplace of ideas.

/With a focus on international policies on environment and development, Ecologic Institute was established in 1995 as a non-profit organization in Berlin, Germany, to conduct policy-relevant scientific research, and provide science-based policy analysis. Ecologic Institute’s expertise is regularly sought by committees of the European Parliament, various Directorate-Generals of the European Commission, governments of EU Member States and other countries, as well as the European Environment Agency.  As a recognized research organization, Ecologic Institute leads several EU-funded research consortia and has exchanges with a number of universities, not only in Europe, but also in the US and China.

The main mission of Ecologic Institute is to improve policies on environment, resources, climate and energy, as well as to integrate environmental concerns into other policies and issue areas, such as government budgets and taxes, the economy and employment, technology and innovation, and foreign affairs and national security. The Think Tank also works with businesses, foundations and non-governmental organizations (NGOs) to strengthen awareness, management, and public-interest advocacy.   Ecologic Institute raises its voice to argue for scientific approaches to analyze problems and develop solutions for more effective environment and resource policies.