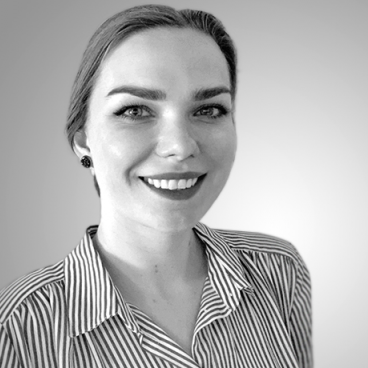 Deyana Spasova is a Junior Researcher at the Ecologic Institute with a thematic focus on climate change mitigation, citizens' participation in climate and energy policy making and renewable energy communities. Deyana Spasova is a native Bulgarian speaker, is fluent in English and has advanced knowledge of German.

In her work at Ecologic Institute, Deyana Spasova focuses on the Conference on the Future of Europe and EU Member States' long-term planning towards climate neutrality.

Prior to this role, she worked as a Student Research Assistant for the Energy & Climate department of Öko-Institut in Freiburg (Germany), where she contributed to the "Renewable Space Heating under the Revised Renewable Energy Directive" (European Commission, DG ENER) project. During that time, she also conducted research for her master's thesis on the topic of "Support for Renewable Energy Communities under the revised EU Renewable Energy Directive: a case study analysis of approaches in Germany and Bulgaria". She has also gained experience as an intern for the Representation of the European Commission in Sofia (Bulgaria).

Deyana Spasova completed her Tricontinental Master in Global Studies in Germany, Taiwan and Mexico. She also holds a bachelor's degree in Journalism, which she studied in Scotland and the USA.

Event:Digital Event
With the Fit for 55 package, the European Commission made far-reaching proposals in July 2021 to align the architecture of European climate policy with the goal of climate neutrality. These proposals include the strengthening of the existing emissions trading scheme, the introduction of new emissions trading for transport and buildings, a border adjustment mechanism (CBAM) to protect against carbon leakage and the tightening of regulatory instruments for transport and buildings. However, the proposals raise a number of questions – from distributional effects and acceptance to the consistency of the instruments. In the course of this two-day hybrid event, researchers from the Ariadne consortium discussed these issues with stakeholders and decision-makers at the European level. 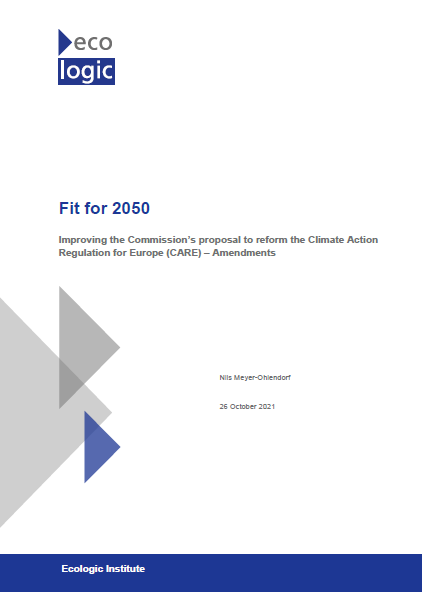 On 14 July 2021, the Commission proposed amendments to the Regulation 2018/842 – currently called by many the "Effort Sharing Regulation". Covering more about 60 % of the EU greenhouse gas emissions, this regulation and its reform are an essential elements of the Fit for 55 package. As a contribution to this debate, a paper by Ecologic Institute presents amendments to the Commission's proposal. Amendments are in particular intended to help ensure that all EU climate policy instruments support achieving the EU's 2050 climate neutrality target and net negative emissions afterwards.

Fit for 2050: Improving the Commission's Proposal to Amend the Climate Action Regulation for Europe (CARE) 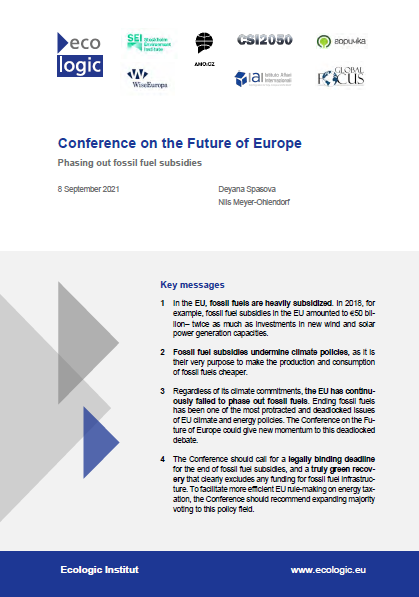 Read more
Publication:Report
Achieving climate neutrality requires structural changes to our economic system, with solutions that work across sectors. Ecologic Institute has developed an assessment matrix based on net zero indicators that can measure climate neutrality, and proposes ways to integrate this framework into existing EU policy processes.

Read more
Event:Conference
On 9 May 2021, the Conference on the Future of Europe (CFE) begins. The CFE is an important moment for EU climate policy making. Successful climate policies depend on the EU - as a driver for ambitious policies in Europe and an advocate of international climate protection.

Read more
Project
With the adoption of the European Green Deal as a new overarching EU strategy, climate policy goals have officially become integrated across EU policy as a whole. The goal of becoming climate neutral by 2050 is at the heart of the European Green Deal – but how will it be operationalized? This project brings together IDDRI, ECF and Ecologic Institute in their aim to enhance transparency of progress towards the net-zero goal and improving long-term climate governance.