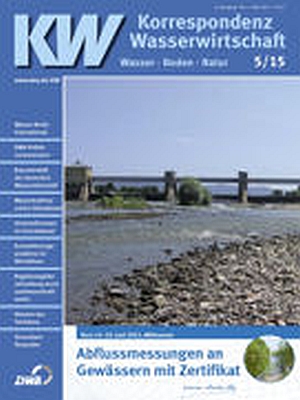 Since the 1992 Dublin and Rio de Janeiro conferences, the river basin approach to the management of water resources has become more and more established. This trend reached its preliminary apex in Europe with the Water Framework Directive (WFD), which binds all Member States to this approach in order to achieve its ambitious goals. In the issue 7/2008 of the journal "KW Korrespondenz Wasserwirtschaft", Stefan von Keitz (biologist) and Peter Kessler (lawyer), Senior Policy Advisor with Ecologic, put this approach to test and deliver a series of arguments for a restricted use of the river basin management approach. In the journal’s following issue (8/2008), Prof. Uwe Grünewald (hydrologist) disagrees with this position and argues for a consistent application of an integrated water management approach with the river basin as its basic unit.

Stefan von Keitz, Hessian Ministry for the Environment, and Peter Kessler agree that from a hydrological perspective a river basin represents an independent unit from which all surface run-off flows into the sea at a single river mouth. The situation, however, is not as unequivocal when considering groundwater. In the WFD, the water bodies defined for surface water and those defined for groundwater are not congruent. Generally speaking, a river catchment does not correspond with a clearly delimited natural geographic unit or ecosystem. Problems were already encountered in the initial characterisation; this was also the case for the delimitation of water bodies and the economic analysis. The WFD, with its typology of rivers and lakes, includes aspects with no relation to the river basin itself. Rivers of the same type can occur in varied river basins.

The situation is similar for pollution caused for instance by agriculture or urban areas, which doesn’t follow river basin limits; solutions for the problems related to these activities should rather be formulated at regional, national or European level than at the river basin level. Substantial functional problems arise when strictly applying the river basin approach in the case of groundwater, inter-basin water transfers, with the cross-media approach (soil, air, water) and within the administration.

On this basis, Peter Kessler and Stefan von Keitz propose to restrict the river basin approach to those subjects where the hydrological link is of relevance. These would include upstream/downstream conflicts, heat regulations, and regulations regarding flooding and low water.

Prof. Uwe Grünewald disagrees with this analysis. He argues that the river basin is for instance the unit of analysis for every science-based balancing approach for water and chemical compounds. Decisions relative to land use in river catchments would also affect the quantity and quality of the resource available in water bodies. In his opinion, management decisions frequently incur mistakes when they are motivated by administrative, institutional or political issues and thereby disregard processes and interactions within the river basin. In addition, the transition from traditional to integrative water management would show that it is predominantly institutional constraints – laws, regulations and statutes – which stand in the way of sustainable water management, and not technological or scientific limitations.

Stephan von Keitz’s and Peter Kessler’s article was published in the issue 7/2008 of the journal "KW Korrespondenz Wasserwirtschaft"; it can be downloaded for a fee from the website of the Deutsche Vereinigung für Wasserwirtschaft, Abwasser und Abfall e.V..