The German National Climate Adaptation Strategy from 2008 and the "Adaptation Action Plan" from 2011 provide a framework for coordinated action on climate change adaptation at the national level. It is known that only a relatively small number of adaptation actions can be taken by federal authorities at the national scale. Against this backdrop, some German Federal States (Bundesländer), such as North Rhine-Westphalia and Thuringia, have developed regional adaptation strategies and programs. The other federal states where such adaptation strategies have not yet been developed, are at the very least publishing Climate Impact Reports or, as in the case of Hamburg, have adaptation strategies in the preparation stage. The City of Hamburg plays a special role in this context because it is not only a federal state but an important German city.

The UBA/KomPass commissioned by the Hamburg Ministry of Urban Development and Environment (BSU) prepared an analysis of the expected climate change impacts in Hamburg. This analysis is used as the basic framework ("Fachlicher Orientierungsrahmen") for our project. It includes both a general overview and analysis of individual sectors, like health, transport or agriculture. Furthermore, first results from the adaptation research project KLIMZUG-Nord, which are relevant for assessing the impacts of climate change and also for the development of an adaptation strategy, are integrated.

Within the project, Ecologic Institute, together with the project coordinator Hamburg Institute of International Economics (HWWI), analyzed the economic costs and benefits of climate change and appropriate adaptation measures to climate change in priority sectors.

The project is structured as follows:

The analysis is based on a literature review of the economic analysis of climate change damages and on the costs and benefits of adaptation measures with a focus on urban areas. For four case studies in relevant fields of action for Hamburg the costs and benefits of adaptation measures are estimated. The case studies are chosen and implemented in cooperation with the Ministry of Urban Development and Environment (BSU) of the City of Hamburg. 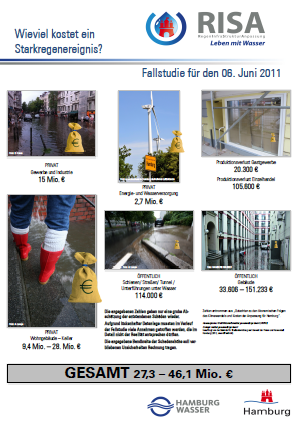 This report for the City of Hamburg highlights that climate change adaptation is a dynamic process with many uncertainties. A core message for public sector institutions is to "bear climate adaptation in mind," especially through the integration of climate change concerns in upcoming decisions and the implementation of measures that have co-benefits today. Furthermore, adaptation activities should begin today if the costs of adaptation potentially remain constant over time or tend to rise. The case studies investigated also indicate that the evaluation of measures must take into account local conditions.

Read more
Presentation:Speech
Jenny Tröltzsch and Max Grünig presented the project results together with the project partner Hamburgische WeltWirtschaftsInstitut (HWWI) in Hamburg.The final presentation showed that still large knowledge gaps on the costs of climate change and the costs and benefits of adaptation measures exist. The cost-benefit analyses of adaptation measures in Hamburg show a large bandwidths for local case studies. But nevertheless the results suggest that higher benefits than costs exist for several adaptation measures, for example a green roof program. Furthermore, it is important to initiate adaptation activities of private actors, to reduce damages, e.g. from heavy rain events.