In June of 2012, 20 years after the first UN Summit on sustainable development, the Rio +20 Conference took place in Rio de Janeiro. The conference agreed on the notion of a Green Economy and the concept of Sustainable Development Goals, however did not decide on their content. Instead, follow-up processes were initiated that are supposed to fill these general concepts with life. Ecologic Institute supports both processes as part of a project for the German Federal Environment Agency (Umwelbundesamt) and the Federal Ministry of the Environment, Nature Conservation and Nuclear Safety (BMU).

20 years after the first sustainability summit in Rio de Janeiro, government representatives from all over the world gathered again in Rio in June 2012. The summit adopted the outcome document with the title "The Future We Want". This document of about 50 pages contains statements on numerous topics related to sustainability, such as marine protection, consumption and production patterns, forest conservation, and water. Central resolutions of the summit related to the Green Economy concept in connection with sustainable development and poverty reduction as well as the negotiation of Sustainable Development Goals (SDGs). The reform of institutional structures within the UN – the system of international environmental governance and especially the reform of the UNEP – were another central focus of the summit.  The outcomes of the summit were met with mixed reactions. German Federal Environment Minister Peter Altmaier called the outcome a step in the right direction, even if not all of the goals were reached. On the other side, environmental organizations criticized the outcomes as being vague and not nearly ambitious enough.

The Rio Summit recognized for the first time that a "Green Economy" is an important tool for achieving sustainable development, but did not agree on a concise definition of the term "Green Economy". The declaration states that a Green Economy should contribute to poverty reduction, sustained growth, social cohesion, and employment without compromising the ability of ecosystems to function. The declaration emphasizes that – considering the differing situations and priorities in each country – there are different paths and models for sustainable development. In addition, a Green Economy should fulfill an array of requirements and criteria. It should, for example, be compatible with international law, respect national sovereignty, avoid unjustified conditionalities for development aid, not lead to unjustified trade discrimination, and contribute to gender equality. To go beyond this, it will be up to individual states to develop a common understanding of a Green Economy and to expand on the general framework given by the summit document with concrete initiatives.

A second success of the Rio +20 Summit was the agreement to develop global Sustainable Development Goals (SDGs). While the summit did not agree on specific goals, it initiated a process to develop and adopt such goals. These should be finalized by 2014. In terms of their content, the SDGs will build upon Agenda 21, the outcomes from Johannesburg, other standing commitments, and outcomes of international summits as well as the topics and priority areas of the Rio summit outcome document  - however, the outcome document does not identify fewer than 24 priority areas, so further structuring and prioritization will be necessary. A particular challenge is posed by the relationship between the SDGs and the parallel process to develop a post-2015 agenda for development policy. A continuation and further development of the Millennium Development Goals (MDGs) is in process as part of the post-2015 agenda. There are obvious links between the content of both processes. At the same time, the coordination of the two processes poses a challenge, as the MDG discussion has a head start of about two years, and the processes are being lead to some extent by differing interests.

Ecologic Institute supports both follow-up processes to the Rio +20 Conference on Sustainable Development Goals and the Concept of a Green Economy. On behalf of the German Federal Environment Agency (Umwelbundesamt) and the Federal Ministry of the Environment, Nature Conservation and Nuclear Safety (Bundesministerium für Umwelt, Naturschutz und Reaktorsicherheit), Ecologic Institute is completing thesis papers and studies, which will be discussed with experts from the scientific community, civil society, as well as policy makers. 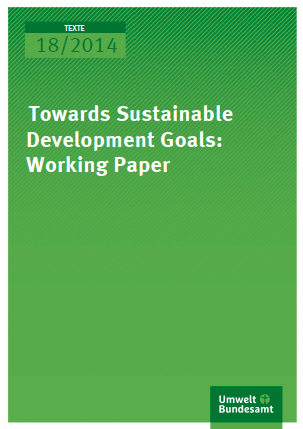 This report, authored by Ecologic Institute, first describes the two processes for the development of Sustainable Development Goals (SDGs) and the post-2015 development agenda, and the options to integrate the results of both processes in order to arrive at one set of goals. It goes on to discuss the possible structure of a set of SDGs, and discusses a number of topic clusters, as an illustration of what possible SDGs could look like. The report is available for download.

Green Economy: The Next Steps

This report, authored by Ecologic Institute, first describes the two processes for the development of Sustainable Development Goals (SDGs) and the post-2015 development agenda, and the options to integrate the results of both processes in order to arrive at one set of... Read more 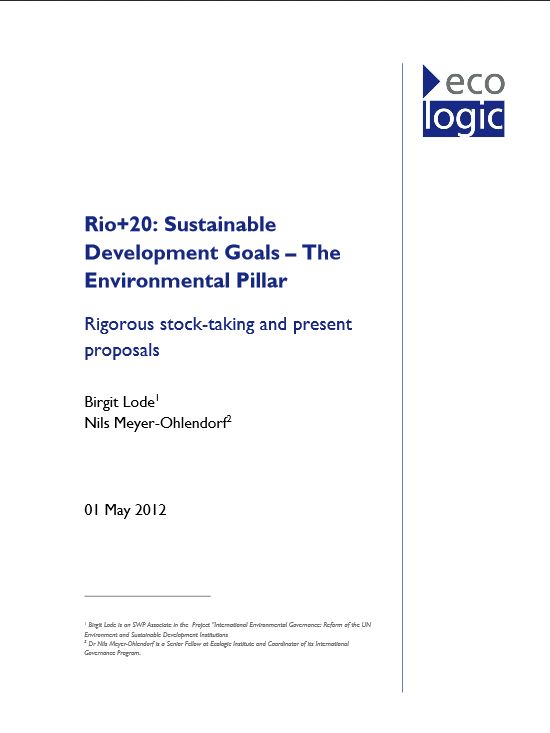 Ecologic Institute and Stiftung Wissenschaft und Politik (SWP) prepared a paper that gives an overview of selected sustainable development commitments, their shortcomings, and possible remedies, as discussed and agreed by relevant political fora. The paper and the... Read more

NewsGreen Economy in the Context of Sustainable Development and Poverty Eradication - Videos for Rio+20
EventClimate TalkRio plus 20 – New Impulses for International Climate Negotiations?
22. Climate Talk
The 22st Climate Talk on 25 June 2012 occupies itself with the question: which impetuses for international climate policy will expand out from the Rio+20 Conference? The debate at the event, organized by Ecologic Institute in cooperation with the German Institute for... Read more