The future of the water sector in Europe has been increasingly at the heart of political debates. Potential evolution of the water supply and sanitation (WSS) sector had not, however, been the subject of in-depth studies. The EUROMARKET project filled this gap by analysing a selection of scenarios for the evolution of the European WSS sector, ranging from delegation contracts to community management, and investigating their social, economic, environmental and institutional implications.

The project’s focus was laid on the way in which the European water sector may develop in the foreseeable future. In this framework, the project first examined explicit and implicit policies of the EU in the water and sanitation sector. Up to then, the EUROWATER study - Institutional Mechanisms for Water Management in the Context of European Environmental Policy, conducted under the Fourth Framework Programme, provided the most comprehensive in-depth analysis of the European water market. This study needed an update, in particular with regard to private sector participation as well as regulation and legislation.

At the heart of the Euromarket project is the identification and evaluation of possible water scenarios with a varying degree of private involvement and of their driving forces. These scenarios, including delegation contracts, outsourcing, regulated monopoly, direct public management and community management, were assessed on the basis of their social, economic, environmental, legal and institutional implications. Finally, the project outlined the potential choices national and in particular EU policy-makers will have to make in order to establish a more comprehensive and integrated water management policy.

The conclusions of the project did not present one scenario as being more advisable than another but rather highlighted the scenarios’ potential advantages and risks on. Clearly, the diversity of management forms and contexts present in the European Union could not and should not be replaced with a single one. The project rather aimed at informing the decision-making process by analysing the scenarios and their social, economic, environmental and institutional implications.

The results of the Euromarket project were presented at the final conference which was held in Lausanne on 14 December 2005. The conference aimed at creating a forum of discussion among research and policy communities on the evolution of the water sector in Europe. The presentations are available for download.

The Euromarket project acknowledges financial participation from the European Community under the Fifth Framework Programme for Research, Technological Development and Demonstration Activities for the Specific Targeted Research Project EUROMARKET EVK1-CT-2002-00113.

Initiator and Convenor, Arctic Summer College
Founder and Director Emeritus, Ecologic Institute
Previous Pause Next
Presentation:Speech
Debates and discussions are still taking place on the aims of the European Commission as regards the strengthening of competition in the water sector. The question is: What would the consequences be for the German water and wastewater sector, if water provision was to be increasingly subjected to competition, public procurement and internal market rules?

European Liberalisation Trends: Effects on the Water Sector in Germany

Read more
Presentation:Speech
The Austrian Water and Waste Management Association (ÖWAV) organised the ÖWAV-Forum 2005 on "Water Sector and Politics – Structures, Controls and Financing". The aim of the conference was to discuss the future of the Austrian water sector, in particular the new legal, economic and environmental regulations. R. Andreas Kraemer presented the trends at European level and their potential effects on the municipal water sector.

Trends in the European Water Sector

Read more
Presentation:Speech
The Technical University Berlin hosted the conference "Water – Economic Good, Weapon, Human Right" on 9 February 2005. Ecologic Associate Britta Pielen spoke on the recent trends towards liberalisation in European water policy and the implications for the German water sector. Over the last years, the water and sanitation sector has increasingly been put under reform pressure. In particular at the European level, a political trend towards liberalising the provision of water services can be observed. These attempts are generally justified by the supposedly positive experiences with the liberalisation of other network industries, as well as with stricter environmental and quality requirements. 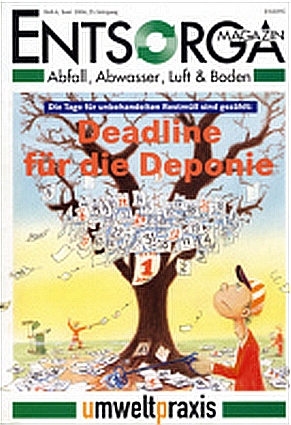 According to the EU Water Framework Directive (WFD), all water bodies in the European Union should reach 'good status' by 2015. The WFD is one of the first environmental policy directives of the European Community that explicitly draws on economic considerations for achieving its ambitious objectives. By the end of 2004, an economic analysis of the importance of water uses has to be completed for each river basin district. This article summarises the present implementation status of the economic analysis in Germany and other European Member States and outlines challenges ahead for the reporting deadline 2004.

Read more
Presentation:Speech
Eduard Interwies, Senior Economist at Ecologic, presented an assessment of the impact on the German water sector of recent developments concerning the potential liberalisation of water services at EU level.

The German Water Sector: From Liberalisation to Modernisation 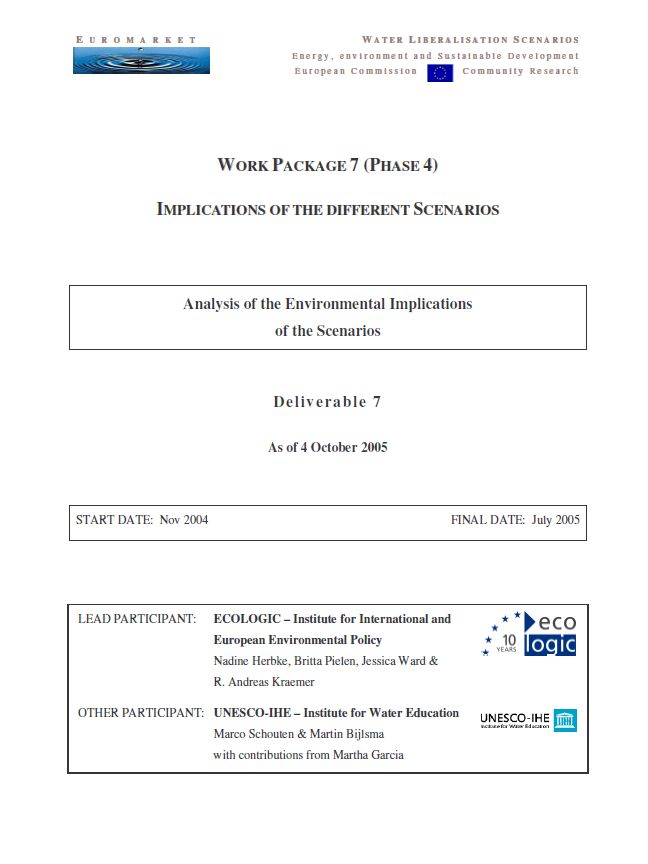 Analysis of the Environmental Implications of the Scenarios

Deliverable 7 Implications of the Different Scenarios 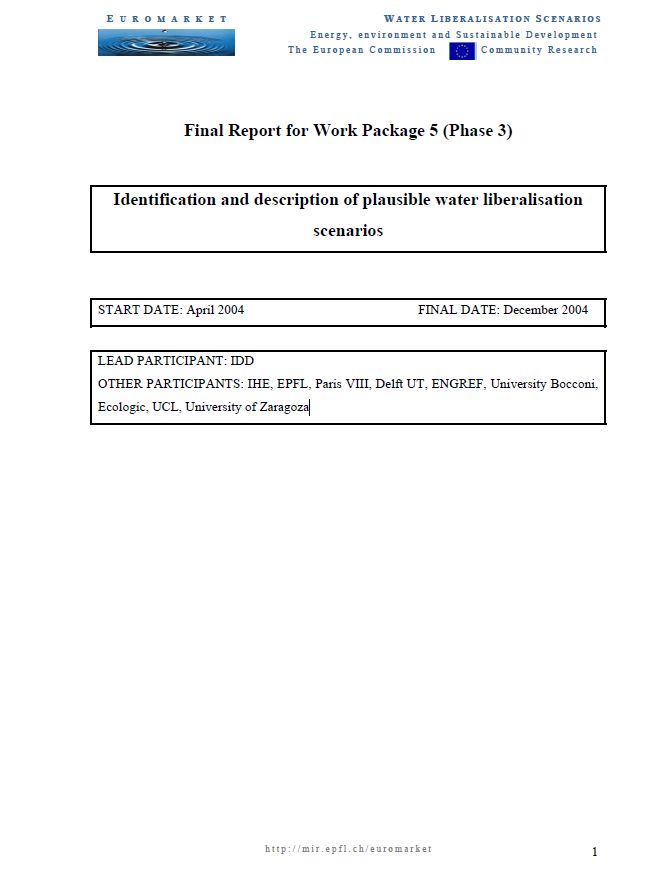 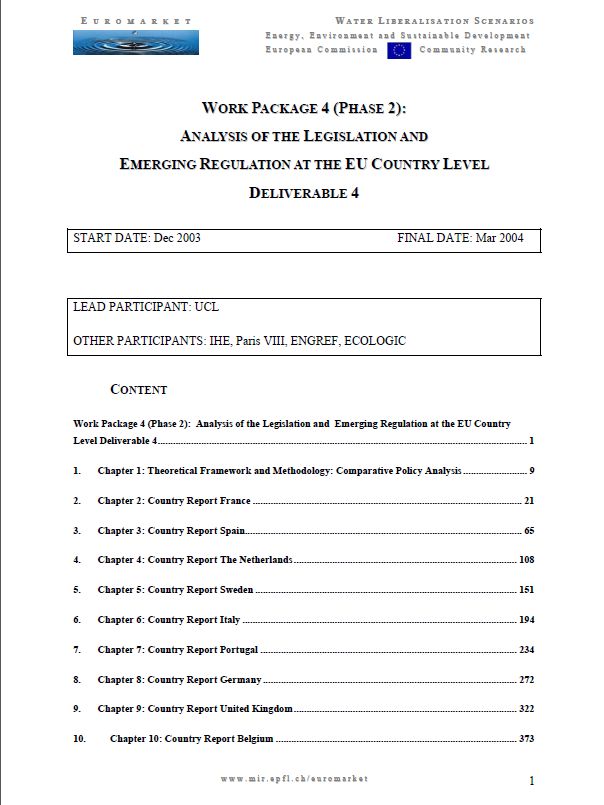 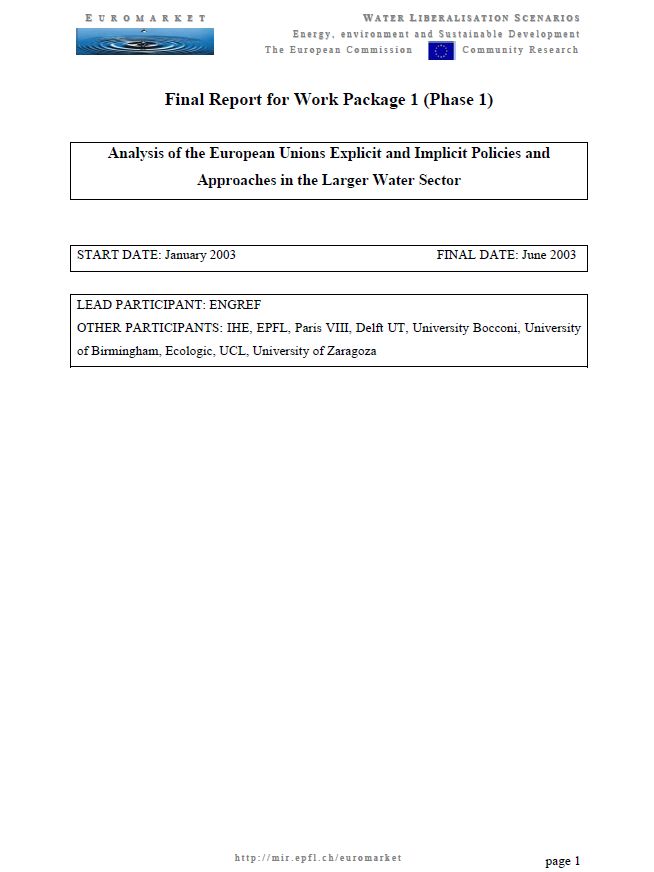 PublicationReportAnalysis of the Environmental Implications of the Scenarios