In this project Ecologic Institute and the Institute for Futures Studies and Technology Assessment (IZT) investigated the acceptance of renewable energies in Germany. While the IZT focused on the local level, Ecologic paid particular attention to the regional level. Ecologic Institute hosted five 'future workshops' from June to December 2006 to openly discuss and debate the issue with representatives from local authorities, NGOs, business and other stakeholders.

A total of five workshops were conducted in different locations in Germany:

Two of the workshops examined the usage of wind energy, two focused on the usage of bioenergy and one discussed open space-photovoltaics. The chosen regions all offered a high potential for the specific energy source. For the analysis of biomass, the regions Lausitz and Wendland were selected. The sustainable extension of onshore wind energy was discussed in the region Braunschweiger Land. The development of offshore wind parks was the focus at the workshop held near Sylt. The workshop on open space-photovoltaics was held in Leipzig.

'Future workshops' or 'Future labs' are a methodology for problem solving and way of participation that focuses on visionary team work. It offers a forum to develop possible and also temporarily not possible future perspectives and checks their chances of realisation. The 'Future labs' run in three steps:

Along with these steps, it is also the goal to activate the participants’ creativity to come up with innovative ideas. The process of self-development of solutions creates identification with the subject and later the realisation of projects. With that, this method additionally causes the affected participants to develop acceptance and motivation.

The acceptance and support of the broader public are fundamental preconditions for further increasing the share of renewable energies in Germany. A lack of such support might for example lead to a slowing down of the planning and permitting processes for renewable energy installations, due to time consuming participation processes and stakeholder consultations. Moreover, support from local authorities depends largely on the dedication and commitment of local players. The aim of the project was to identify and investigate resistance to renewable energies and to jointly elaborate policy recommendations on how to increase public acceptance of and support for renewable energies.

Further information about the project is available here.

Scientific & Executive Director, Ecologic Institute Europe
Board Member
Previous Pause Next
Project
Public acceptance of renewable energies is fundamental to further increasing their share in the overall energy supply. Ecologic organised a series of five future labs to investigate public acceptance at the regional level and to elaborate policy recommendations on how to generate further support for renewables. 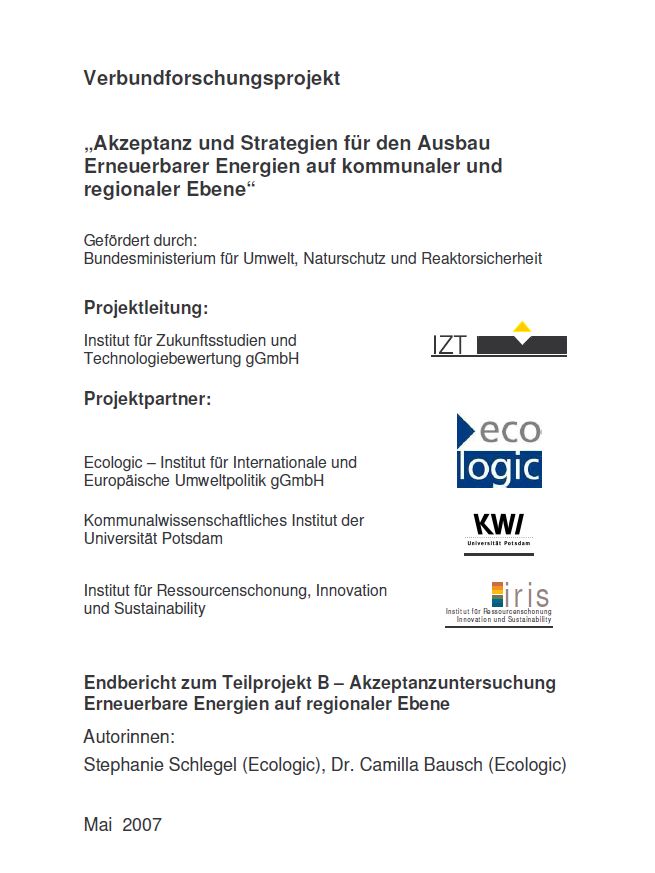 ProjectSoil Protection and Renewable Resources
Soil Protection and Renewable Resources
The increased use of renewable resources has several positive environmental effects in comparison to the use of fossil fuel. Nevertheless, with an extended cultivation of energy crops and other renewable resources, there may also be negative consequences on soil quality... Read more

EventDiscussionSide Event on Renewable Energies at the UN CSD-12
At the 12th session of the UN Commission on Sustainable Development, Ecologic supported the German Ministry of Environment in organising a side event on renewable energies in New York. With some 250 participants, the side event was one of the largest of its kind at CSD... Read more

Discussion:Side Event on Renewable Energies at the UN CSD-12

Dinner Dialogue:Solar and Wind Power: More Energy Security for the US?