The objective of this report was to establish a starting position for potential advances in DRR strategies through review, data collection and historical analysis. In particular, the report reviewed (supra-)national DRR management plans for all CSs and analysed large-scale historical events to derive lessons-learned at RISC-KIT European CSs in the United Kingdom, Portugal, Italy, and France. Large-scale events like tropical cyclones and hurricanes were also analysed for Bangladesh and the USA. An interdisciplinary approach drawing on the physical, economic, social and historical sciences was used to ensure that all aspects relevant to the project were considered.

Although intergovernmental, supra-national and national DRR polices exist and are publicly available, it resulted quite difficult to obtain a complete overview of their structure and mutual relations. The perception was that there is a huge documentation on the topic but no sources can be considered exhaustive. Moreover, especially at the supra-national level, the number of Strategies, Directives, Guidelines and Tools related to Disaster Management and DRR turned to be uncountable. A significant effort is spent by the European Commission to try to coordinate policies at EU level but it is still difficult to identify a clear roadmap for citizens and policy-makers.

On the other hand, at the national level, even when there is a clear intent to solve and face the issue in a comprehensive and integrated way, administrative and political obstacles identified in the analyses make a common approach difficult between member states. Comparisons and standardization processes of the approaches used for example for the application of the EU flood directive seem to be far away from the target.

Several shortcomings in policies, in terms of clearness, consistency and coordination were evidenced. Complex systems of emergency response and management at national level were highlighted. Moreover, a general discordance from official national adaptations claims and what is the technical perception that practitioners have of coastal risk management, was evidenced for UN HFA and EU FD.

An analysis was undertaken on the record of historical large-scale events on the case study sites of the Norfolk Coast (UK), the Charente-Vendée coast (France), the Cinque Terre-Liguria (Italy), the Emilia-Romagna coast (Italy) and the Ria Formosa coast (Portugal). In addition to these European cases, the review was extended to non-European examples from areas exposed to tropical storms: tropical cyclones in Bangladesh (1991, 1997, 2011), New Orleans and the Louisiana coast (2005, 2008), New York City and New Jersey (2012).

The analyses of a database developed ad-hoc from the European case study sites managed to date large-scale disasters to the middle ages. It also evidenced the re-occurrence of events with comparable magnitudes overtime, showing that the "exceptionality" of recent disasters is only a matter of perception, generally due either to an increase in coastal occupation or to a loss of historical memory. As the database became more quantitative regarding the forcing factors (e.g. from the XX century onwards), it was clear that in some occasions (e.g. the re-occurrence of a comparable storm along the coast of Eastern England) large spatial variations in flood level might occur. Notably an analysis of high magnitude tropical storms (hurricanes) in the USA found that a large change in DRR policies only took place after the largest coastal disasters in American history (e.g. Katrina, Sandy).

Previous Pause Next
Publication:Article
This paper deals with how culture is expressed through the interplay of socially, politically, and economically driven processes and practices in place-based biophysical contexts as well as the role played by narrative expressions in the formation of coastal risk management, knowledge and action. It draws upon ethnographic, comparative, and historical approaches to understand how culture frames what we know and how we respond differently to risks. 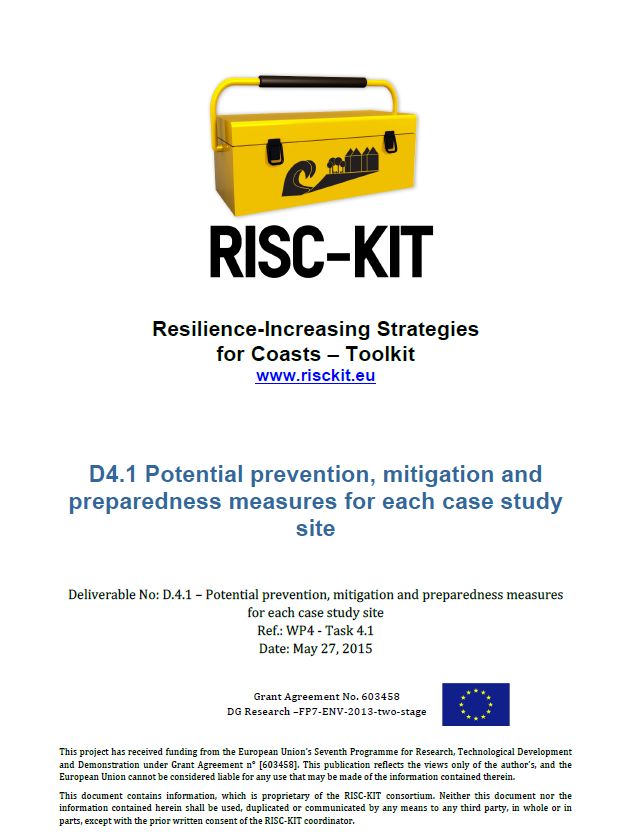 Risc-Kit Report
This report summarizes the potential prevention, mitigation, and preparedness measures for each of the eleven case studies included in RISC-KIT (Resilience – Increasing Strategies for Coasts – ToolKit). It includes a discussion with case study owners about potential... Read more 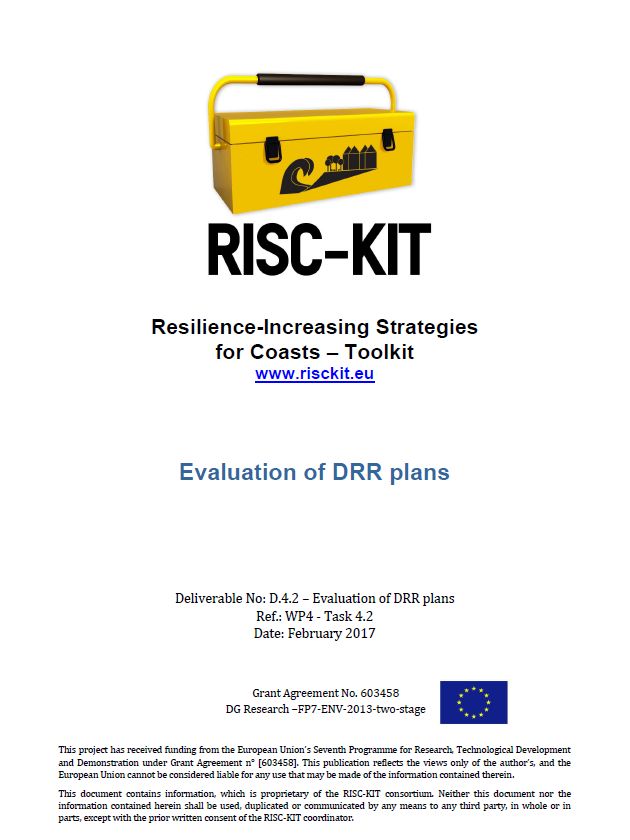 Risc-Kit Bericht
This report shows the results from the implementation of the MCA in eight RISC-KIT cases that highlights several key lessons for future DRR projects with regards to a) the importance of sufficient preparation for participatory sessions; b) stakeholder interaction and... Read more