As part of the Transatlantic Climate Bridge, an informational trip for a group of political decision makers and entrepreneurs from the southern United States took place from 6 to 12 June 2010. The programme informed the participants about job creation in a “green” economy by using Germany as an example. In so doing, the main challenges and opportunities of a progressive climate and energy policy were presented. In addition to the focus on law making and political factors, other important aspects of the programme were the information exchange with experts in this field and the identification of best practice examples. The tour was organized and implemented by the Ecologic Institute.

Through a number of different event formats (discussions, lectures, excursions, cultural framework programme) with representatives from various Ministries, the Parliament, industry, think tanks and NGOs in Berlin and North Rhine-Westphalia (Essen and surrounding area), the programme provided a comprehensive insight into job creation in a green economy.

In addition to providing information on the German perspective on the issue, the visit was intended as a forum to exchange views and create a foundation for further discussion and cooperation.

The following events were part of the Berlin itinerary:

A Riverside Chat with the "Transforming the Energy Sector - Ways Towards 100% Renewables" provided the floor for discussions with invited experts and the group.

A presentation on the project InnovationCity Ruhr also provided a further example of a successful and practical way to handle the current structural change in the Ruhr area region.

The programme in Essen was complimented by several excursions:

ProjectTransforming Economies through Green Investment
Transforming Economies through Green Investment
In his 2010 State of the Union address, President Obama declared the need for "serious investments in clean energy" because "the nation that leads the clean energy economy will be the nation that leads the global economy". He urged Congress to pass legislation that... Read more 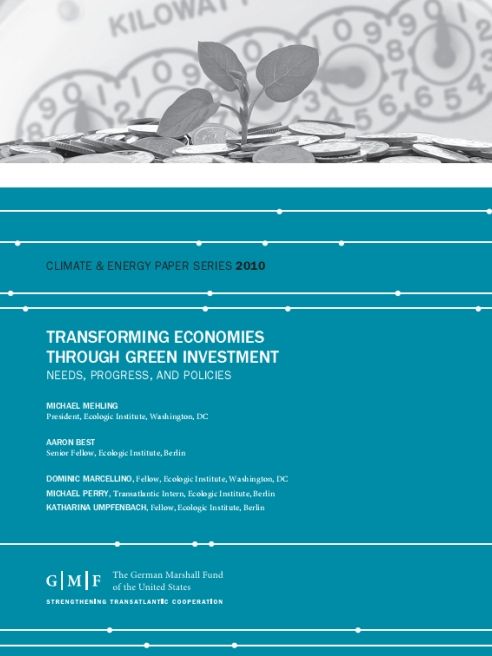 Speech:Taking Advantage of the Crisis: Synergies between Environmental Policy and Social Inclusion