Supply-side factors are key to explaining the dramatic fall of oil prices from over $100 per barrel since late 2013 that have eaten into the profits of oil companies. However, oil industry observers are increasingly drawing attention to the long-term disruptive potential of new technologies, design methods, and business models that could also herald strong competitive pressures by weakening consumer demand for oil. The results of the Paris Climate Summit with its call for rapid emission reduction, early peaking and green-house-gas neutrality can accelerate this trend and herald a paradigm shift. As the world begins to embrace a low-carbon future by 2050, as evidenced in the Paris Agreement and many private sector initiatives, what are the strategic implications – and opportunities – for oil companies and resource owners?

On 13 January 2016, Ecologic Institute hosted a Dinner Dialogue on the future of the oil industry featuring guest speakers Amory B. Lovins (Co-founder and CEO of the Rocky Mountain Institute) and Dr. Karsten Sach (Germany's Chief Climate Negotiator). The event was moderated by Ecologic Institute's Director, Dr. Camilla Bausch. During the event participants discussed the potential impact of disruptive competitors to oil markets such as energy efficiency and renewable energy on the future of the oil industry. Participants also assessed the role of policy vs. market forces in driving decarbonisation of the transport sector after the Paris climate summit.

The Dinner Dialogue was an event of the Emerging Leaders in Environment and Energy Policy Network (ELEEP), as part of its ELEEP Transatlantic Dialogue on Energy and Climate.

Amory B. Lovins is an American consultant experimental physicist and 1993 MacArthur Fellow, has been active at the nexus of energy, resources, economy, environment, development, and security in more than 50 countries for over 40 years. He is widely considered among the world’s leading authorities on energy—especially its efficient use and sustainable supply—and a fertile innovator in integrative design and in superefficient buildings, factories, and vehicles.

Dr. Karsten Sach is Deputy Director-General for European and international Policy in the Federal Ministry for Environment, Nature Conservation, Building and Nuclear Safety in Germany. Before he assumed that office in 2004, he led the Division "International Cooperation, Global Conventions, Climate Change” for five years. Since 1999 he is the German chief negotiator at the UNFCCC conferences of the parties.

The Dinner Dialogue was made possible through the kind financial support of the Federal Ministry for the Environment, Nature Conservation, Building and Nuclear Safety (BMUB), the European Union, the Robert Bosch Stiftung and the US Embassy in Berlin.

Will new technologies, design methods, and business models mean a rough future for the oil industry?

Read more
Event:Discussion
On 23 May 2016, the ELEEP Network hosted a Side Event at the May UNFCCC meeting in Bonn. The event featured guest speakers Aki Kachi (ELEEP Fellow 2015/2016) and Michael Mehling (MIT). Matthias Duwe (Head of Climate, Ecologic Institute) moderated the event. During the event, the speakers discussed existing options for the development of carbon markets post-Paris and provided a perspective on what they could mean for carbon markets in the US and the EU. A video recording of the event can be viewed on the ELEEP Network YouTube Channel.

Read more
Event:Visitors Program
The first study tour of the 2015-2016 ELEEP Fellowship Class took place from 21 until 25 September 2015. On the study tour 15 ELEEP members visited Denmark and Germany to explore both opportunities and challenges of the European Energy Transition.

Read more
Project
The Emerging Leaders in Environment and Energy Policies Network (ELEEP) is helping to deepen transatlantic cooperation on climate and energy by organising a Transatlantic Energy and Climate Dialogue. Specific themes of the ELEEP Transatlantic Energy and Climate Dialogue are the transition to low-carbon energy systems in the EU &amp; the US, local adaptation of energy systems to climate change impacts and the potential for transatlantic cooperation in carbon markets. Over the course of two years, 40-60 new ELEEP Fellows will join the network and engage in a variety of offline and in-person activities. Based on these activities, members will collaborate on online platforms to produce jointly published policy papers and impact projects, which will be presented at an ELEEP Conference in Washington D.C. in the summer of 2017. 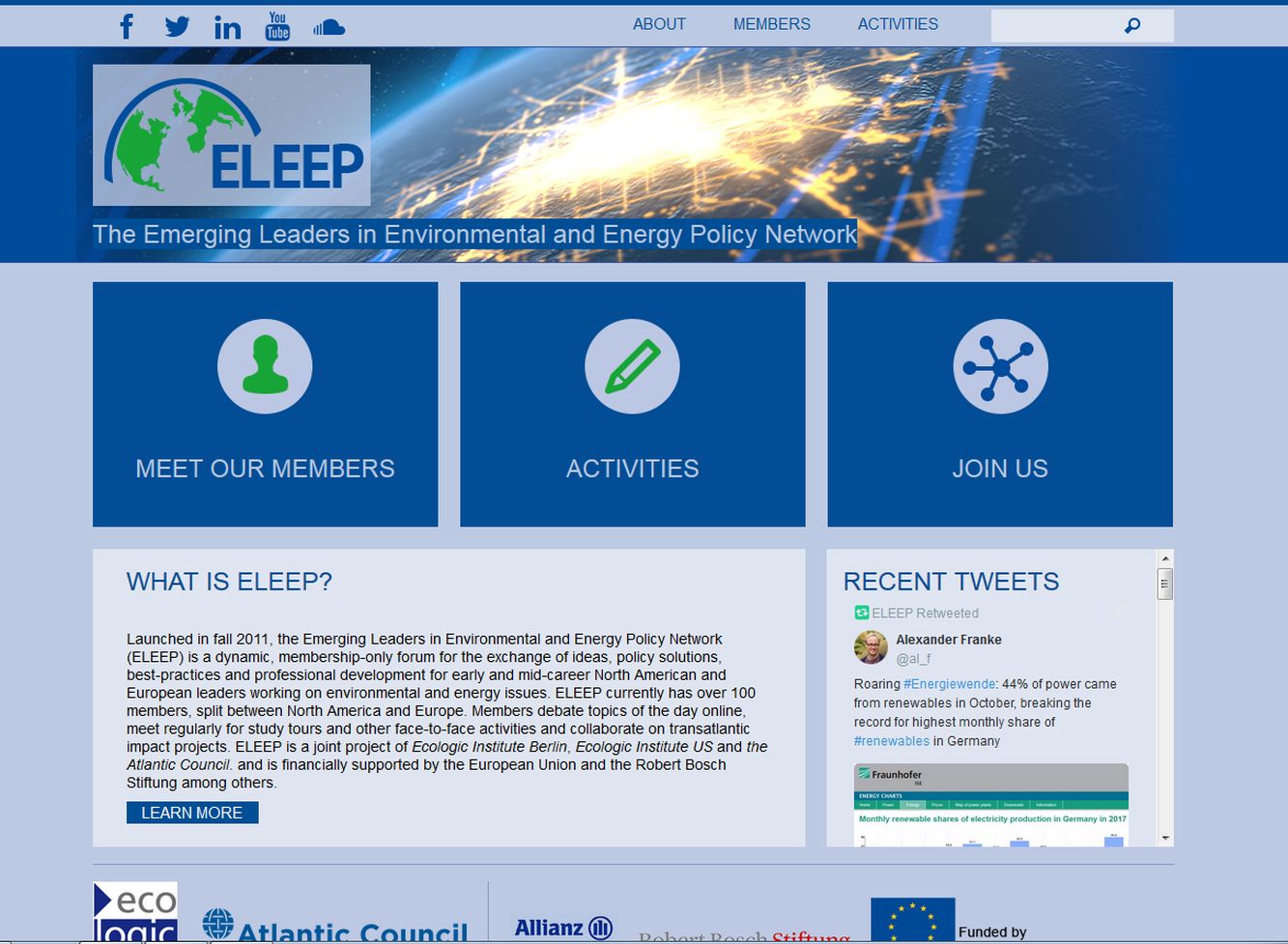 ELEEP is a dynamic, membership-only forum for the exchange of ideas, policy solutions, best-practices and professional development for early and mid-career North American and European leaders working on environmental and energy issues. Ecologic Institute developed ELEEP's website which offers a place for ELEEP members to interactively exchange information in a blog, register for ELEEP study tours, get news about ELEEP and join online events. The website also contains a dynamic map displaying the origins of ELEEP's fellows and alumni.