Circular Economy promises a lower resource and energy use, new employment sector and economic growth. However, can an European circular economy fulfill these expectations and what environmental, social and economic impact does a transition to such an economy bear? The project CIRCULAR IMPACTS will answer these questions by collecting and assessing the existent knowledge base. On 27 October 2016, Lucas Porsch from Ecologic Institute presented the goals of the project. The slides are available for download.

It seems like everybody is talking about circular economy. The scientific approach, where waste and byproducts are used as resources, promises a lot: lower energy and resource consumption, new employment sectors and economic growth within the planetary boundaries.

The question remains, up to which degree a European circular economy can fulfill these expectations and what environmental, social and economic impact a transition to such an economy bear? The project CIRCULAR IMPACTS will answer these questions by collecting and assessing the existent knowledge base. Additionally, several case studies, which illustrate the potential of the circular economy exemplarily, will be provided.

The expectations of the project CIRCULAR ECONOMY are as wide-ranging as the expectations regarding the circular economy . Thus, a high number of interested parties and people attended the kick-off meeting. This does not only include the advisory board, but also members of the EU commission, the European Environmental Agency and Eurostat. The variety of actors presented different requirements of several comprehensive European policy processes, including the European Semester and Circular Economy Action Plan.

Members from several director-generals of the European Commission attended, including some heads of unit. These employees from Directorate-General for the Environment; Directorate-General for Internal Market, Industry, Entrepreneurship and SMEs and the Executive Agency for Small and Medium-sized Enterprises (EASME) (which is leading the project) commented on plans of the project consortium and presented own ideas.

While the backgrounds of the attendees were highly heterogeneous, their expectations and pro-posals were very disparate. Data and information of different scopes were required- from different sectors, and on a regional to national level. Now, the project consortium will develop and implement the project, while consulting the advisory board and EU commission.

High expectations and many members of the EU commission met a motivated consortium
Previous Pause Next
Publication:Report 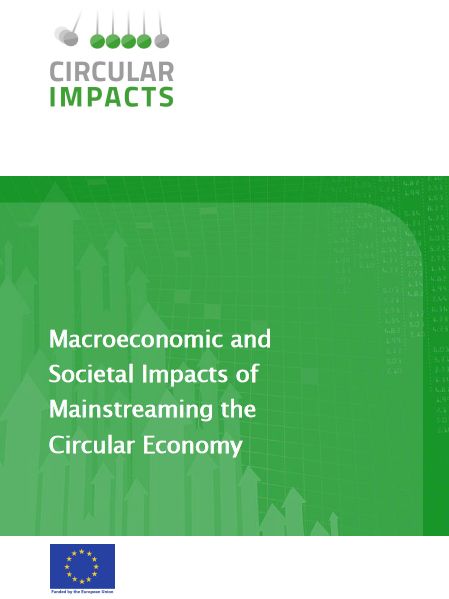 This report summarizes the key findings of the CIRCULAR IMPACTS project and provides an impact analysis setting out impacts of circular-economy transitions on the macroeconomy and society. The results of case studies conducted within the project are included as are results from modelling done by external parties, accompanied by an overview of the methodologies used. This report thus provides an overview of presently available quantitative evidence on the macroeconomic and societal impacts of the circular economy. In addition, an overview of recent policy development on EU level in relation to the circular economy is provided, as are the key conclusions and policy messages from the project. Lastly, recommendations for future circular economy research are given, with the aim of improving scenario-based impact analyses for the European policymaking context.

Macroeconomic and Societal Impacts of Mainstreaming the Circular Economy 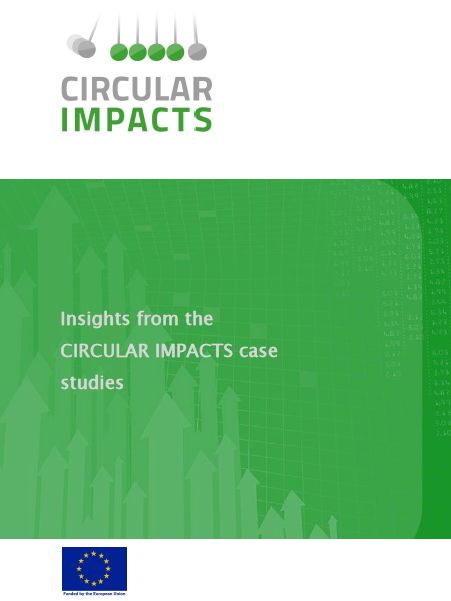 This report summarizes the results of the case studies in the CIRCULAR IMPACTS project and derives some main lessons from these case studies. The case studies are on concrete recycling, phosphorus recycling, car sharing, and recycling of batteries from electric vehicles. 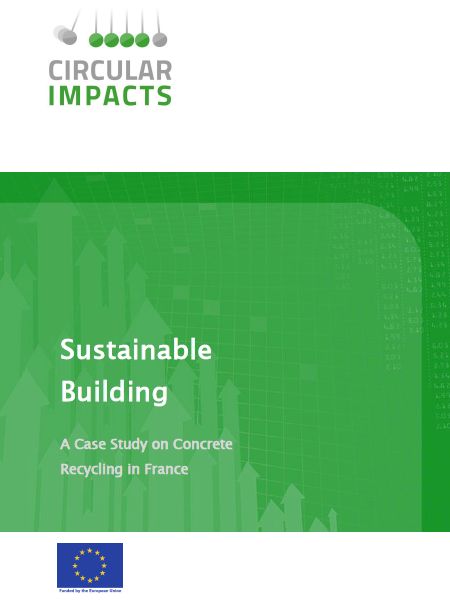 This case-study paper focuses on concrete recycling in France as a means of understanding circular-economy transitions in the building-materials sector. The EU, including France, produces large volumes of construction and demolition waste (CDW) per year and aims to increase the re-use of these materials, reducing landfilling and negative environmental impacts. Recycling concrete is seen as a way to contribute to these objectives by ensuring that a portion of this waste is turned into a product with value. Currently, France does not recycle CDW as much as some other Member States. This case study paper carries out a scenario analysis comparing two future scenarios for 2030, providing insights into important environmental and economic impacts of an increased concrete recycling rate in France.

A Case Study on Concrete Recycling in France 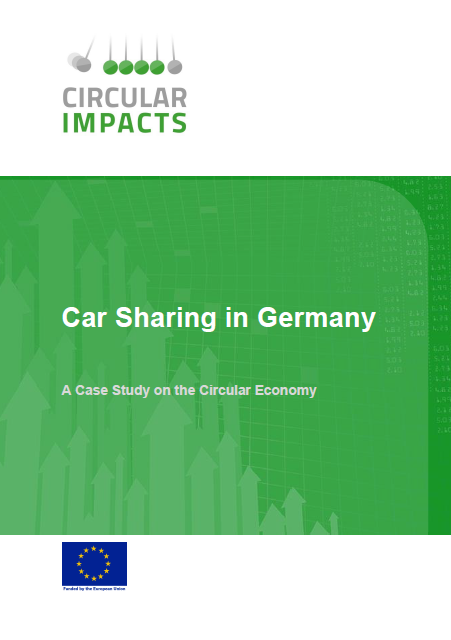 This case-study paper examines future scenarios for car sharing in Germany, analysing drivers and impacts. Enabled by disruptive technological changes, car sharing is an example of a "product as a service" and becoming an increasingly viable alternative to the private ownership of cars. By intensifying the use of vehicles, car sharing has the potential to provide mobility using fewer physical and energy resources.

A Case Study on the Circular Economy 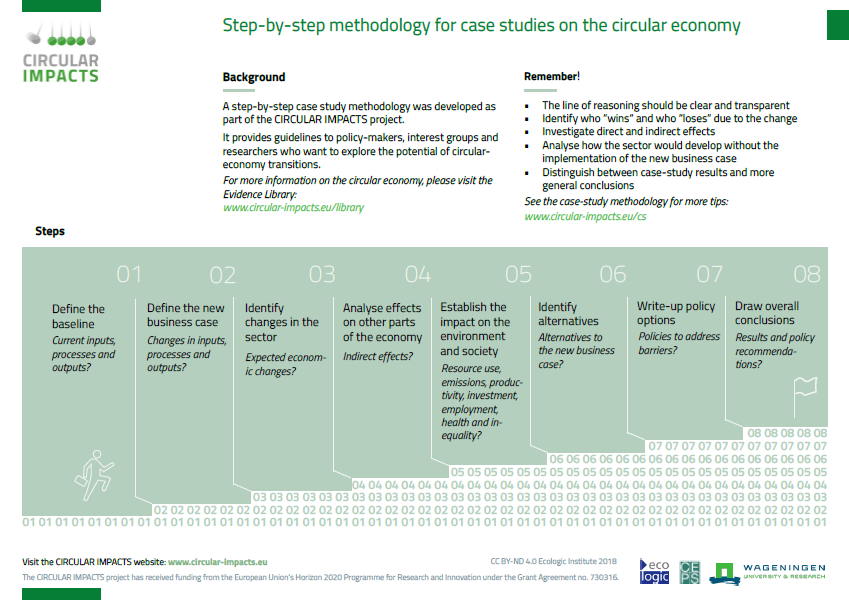 This infographic provides guidelines to policy-makers, interest groups and researchers who want to explore the potential of circular-economy transitions by conducting case studies. It visualizes the step-by-by step methodology developed within the CIRCULAR IMPACTS project in an intuitive way. It also highlights the most important aspects to consider when preparing such case studies.

Step-by-step Methodology for Case Studies on the Circular Economy 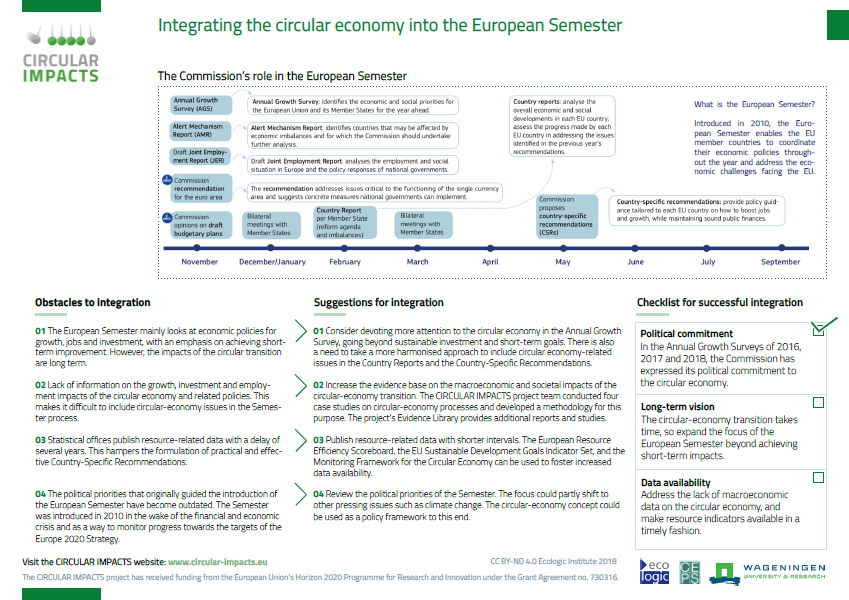 This infographic focuses on how the circular economy can be integrated into the European Semester. It illustrates the European Commission's role within the process and identifies obstacles to integration, along with possible suggestions to address these obstacles. Additionally, it provides a checklist for successful integration.

Integrating the Circular Economy into the European Semester 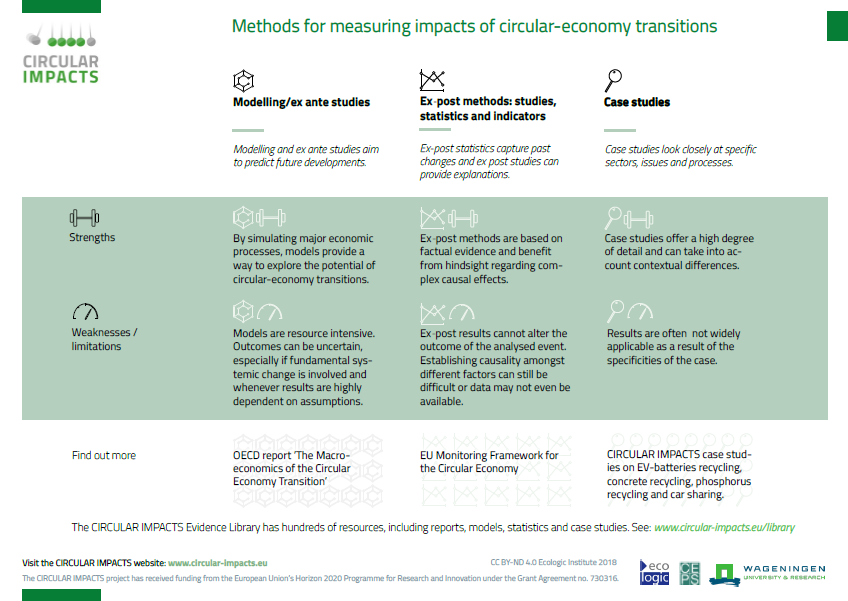 This infographic illustrates the strengths and weaknesses of various methods for measuring the impacts of circular-economy transitions.

The conference "Impacts of the circular economy transition in Europe" took place in Brussels on 5 September 2018, organised as part of the CIRCULAR IMPACTS project. Around 150 people attended the event, including officials from the European Commission, national ministries, the public sector, industry, and NGOs. Ecologic Institute, as project lead, and the CIRCULAR IMPACTS project partners presented their findings on the impacts of moving towards a more circular economy in Europe, one that uses resources efficiently and maintains the economic value of materials. In addition to discussing their insights regarding the policy frameworks necessary for fostering a resource-efficient economy, team members presented evidence on the impacts and potential benefits of moving towards circular-economy approaches in three sectors: electric-vehicle batteries, car sharing, and building materials.

The workshop "Car Sharing in Germany" took place on 8 March 2018, hosted in Berlin by Ecologic Institute. In the first part of the workshop experts addressed the current state of affairs of car sharing in Germany, confirming the dynamic nature of the industry and the difficulties involved in assessing its size and effects. In the second portion of the workshop they focused on future developments as well as the importance of policy for a societal transition away from privately owned vehicles. Ecologic Institute co-organized the workshop as part of the CIRCULAR IMPACTS project and in collaboration with Service Innovation Labs. 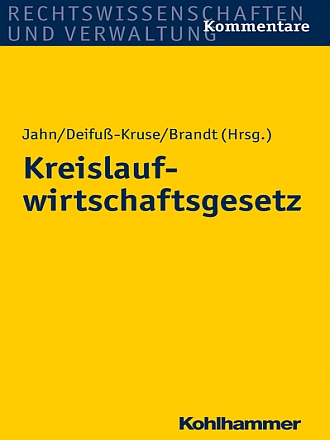 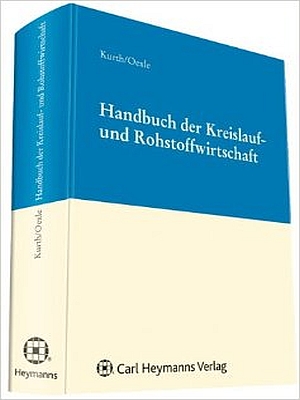 Handbook chapter on the promotion of the waste management recycling of biowastes under the German Life-Cycle Resource Management Act as amended in 2012 and on the incentives regime for the energy recovery from biowastes particularly in the electricity sector under the... Read more