Europe may finally get serious about the green energy shift as Putin ramps up his cruel war in Ukraine and beyond. Politically, decades shrink to months, and years to days as practically all democratic nations scramble to reduce or stop the import of gas, oil, coal, and uranium from Russia. That should already have started doing that in 2014, after Russia's invasion and illegal annexation of Crimea and – by proxy – occupation of part of the Donbas.

Not nearly enough was done in the 8 years since, but at least the blueprints for a new global energy system have become clearer. Political momentum now clearly favours the energy transition towards smart and efficient use of exclusively renewable energy as well as flexibility and storage in IT-driven energy management systems that link the power supply with transport, buildings, and industry. The determination and courage of the Ukrainian people should now be matched with equal ambition and sense of mission to stop global overheating and ocean acidification. All the good arguments that were made to keep the Earth habitable for humans can now be placed in the context of the fight for freedom, independence, and self-determination.

That does not stop the friends of fossil energy and the nuclear lobby from pushing for prolonged use of the dirty and dangerous old technologies. But make no mistake, nuclear power is not a viable substitute for gas or oil, and neither is coal, which is equally incapable of accommodating the predictable fluctuations of renewable electricity and energy demand. To date, only gas is capable of doing that. From an economic perspective, investing in new fossil energy resources let alone nuclear power would be a massive waste of money, talent, and time. There is also a risk of creating lock-in effects that will complicate future efforts to achieve environmentally sound net-zero emissions. Energy efficiency combined with whole-system electrification is the key to success, both for energy resilience and climate protection, but we must ensure the electricity is renewable and sustainable.

There are many models and studies aimed at explaining what is happening and will happen in energy systems and markets because of Russia's forced withdrawal from fossil energy markets. Consumer prices are expected to rise and fossil fuel consumption is expected to decline; by how much we will know in a few months. This will bring economic hardship to some, especially low-income countries, and to the poor in rich countries, and they will need help to sustain the transition.

The best approach is to provide targeted support that enables vulnerable households to reduce their energy consumption, and thereby become less vulnerable. This may take time. For the necessary short-term support, there are proposals for lump-sum compensation payments to poor and vulnerable households. They can compensate for the loss of purchasing power without distorting the price signal that says: Fossil energy is really expensive given the damage it does to climate, and peace and freedom.

Energy security has moved to the forefront of the energy policy debate, in particular with regard to imports of natural gas from Russia. Natural gas forms a backbone of our energy system. It is important for industry and for heating our homes. It is valued in the power sector because, unlike coal and nuclear power, it is very flexible.

However, if the batteries we already have in electric vehicles and homes are connected to the grid and encouraged (and technically enabled) to supply power to the grid when demand is high and supply is low, gas-fired peaking plants might no longer be needed. As a side effect and with the right market design, using existing batteries for grid stabilisation holds the potential to lower the system costs and electricity prices, exactly what consumers and the economy need. With political will and swift coordination, this could happen within unexpected speed, as smart technology is already installed in many places. It needs the right regulatory framework and tariffs that set the right incentives for supply, demand, and storage.

The war in Ukraine has triggered a far-reaching transformation of energy policy in Europe. Now, European leaders are pushing for a faster switch to renewables. Their ambitious plans call for accelerating the deployment of solar and tripling clean energy capacity by 2030. In Paul Hockenos' article "Will Russia's War Spur Europe to Move on Green Energy?", R. Andreas Kraemer and Sascha Müller-Kraenner, both founders of Ecologic Institute, explain the opportunities and possible paths for an accelerated energy transition and independence from Russian gas.

As Russia's invasion of Ukraine continues to take a heavy toll, the heads of state and government must take action to support Ukraine while also strengthening the bloc's own strategic autonomy from Moscow. The European Green Deal will be crucial for the success of this strategy. This op-ed, which is available online and signed by the Think Sustainable Europe Network’s Executive Directors, explains why. 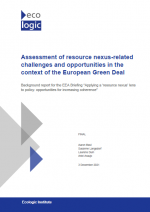 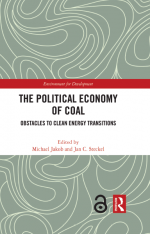 The Political Economy of Coal – Book

This volume, edited by Ecologic Institute's Dr. Michael Jakob, provides an overview of the political economy of coal in the contexts of different countries. It contains 15 country case studies following a harmonized framework. This includes industrial and developing nations, coal importers and exporters, as well as countries that are either substantial coal users, are just beginning to ramp up their capacities, or have already initiated a coal phase-out. This large set of comparable studies permits drawing conclusions regarding key similarities as well as differences driving coal use in different countries. The book is available for download.

What Role for a Climate Club? – Options and Recommendations for the German G7 Presidency 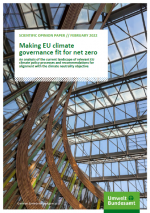 In this opinion paper, Ecologic Institute's Matthias Duwe analyzes the current landscape of climate policy governance against eight core parameters at the EU level and for Member States and identifies some remaining weaknesses. Improvements should address several key processes, such as updating the NECPs in 2023-2024 and national LTSs, as well as the new progress and consistency assessments under the EU Climate Law. He identifies several specific measures to be taken in 2022 and 2023 to enhance these processes. The paper is available for download.

Ecologic Institute produced best-practice guidelines for co-creating research. The guidelines are based on experiences gathered in the Horizon 2020 project COACCH (Co-designing the Assessment of Climate Change Costs). Based on an in-depth evaluation, the Ecologic Institute team highlights lessons learned and proposes step-by-step guidelines for best-practice in co-creation. For each step, the authors outline activities, provide examples and give implementation guidance. Crucial elements of success include: having dedicated knowledge brokers to guide collaboration and having a culture of regular, transparent communication. The briefing note is available for download.

This article by Ecologic Institute's Linda Mederake reflects on the 59th Tutzing Symposion entitled "Polymers for a better life and circular economy" that took place in October 2021. It provides an overview of current debates on the circular plastics economy, as well as insights into existing political regulations, present challenges, and possible future developments concerning this major societal project. 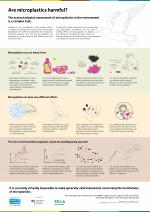 Whether or not microplastics have harmful effects on plants and animals has not yet been conclusively established. The different properties of microplastics determine whether and how the microplastics are absorbed by living organisms and whether they are harmful to them. Ecologic Institute's infographic is available for download as a poster (A2).

The relevance of plastic pollution in the natural environment remains high. To bridge critical knowledge gaps, the Federal Ministry of Education and Research of Germany launched the major research focus "Plastics in the Environment – Sources – Sinks – Solutions" in 2017. Twenty different research projects with more than 100 participating institutions from science, industry and practice are dealing with very different aspects of the problem. The findings of that research will be presented on 6 May 2022 in Berlin.

Climate Litigation: What Can the Global North Learn from the Global South? – Lunch Talk

From 21 to 25 March 2022, our partners Verfassungsblog and Völkerrechtsblog publish blog posts on this topic by researchers from all over the world as part of an online symposium organized jointly with Ecologic Institute. In a lunchtime discussion on Thursday, 24 March 2022, 2:00-3:00 p.m. (CET), we will discuss the topic of "The Constitutional Dimension of Climate Litigation" with one of the authors, Sam Bookman from Harvard Law School, and draw the line to first insights of the symposium. We warmly invite you to join us.