I have been closely following developments in energy policy for nearly two decades. Never in this time has the situation been as disruptive and, frankly, as worrying as it has been in the last few months. To be able to react appropriately, it is important grasp the extent of the crisis: Russia weaponizing energy supplies has driven up the gas price to a level seven times higher than the average over the last five years. And yet, even at these extreme prices, it is not clear whether demand will fall quick enough to avoid rationing. The power market is experiencing record price levels, too. However, this is not only due to high gas prices, but also to France's ageing nuclear fleet and a record-breaking drought which impeded hydroenergy generation and power plant cooling. While it is unclear when the confrontation with Russia will end, we can be sure that the latter problems will stay and probably worsen.

In other words, we are dealing with an acute, short-term crisis. But there is more to it. Our response must reflect that. The Herculean task ahead is to manage the short-term crisis without delaying the steps that need to be taken in the mid-term. In the short term, the unprecedented stakes are already being matched by an “all hands on deck” approach aimed at cutting energy use, finding alternative energy suppliers and keeping vulnerable households and companies in solvency.

With an eye on the next few years and ultimately on climate neutrality, we need a massive acceleration of investment in renewable energy, heat pumps and energy efficiency, as well as the supply chains and infrastructures that make these technologies possible. If there is one upside to this crisis, it is the momentum it can generate for transformational change, rather than the incremental steps that were never up to the task of getting us to climate neutrality in the first place.

In our response to the multiple crises, one resource has not sufficiently tapped so far and that  is the willingness of citizens, communities and companies to do their part – both by saving energy and by investing. For this to happen, consumers need more transparency about their energy consumption levels (and potentially also the current load in the system) closer to real time. Financial incentives for those who reduce energy consumption below previous levels may also be helpful. But above all, the high level of public attention on energy is a unique opportunity to trigger a wave of private investment into clean energy solutions. This requires support for the supply side and a willingness to quickly reduce administrative barriers for licensing, grid connection, for joint consumption of renewable energy and for energy communities. Finally, governments have a responsibility to avoid any additional stranded assets e.g. by swiftly phasing out new fossil-based heating systems. 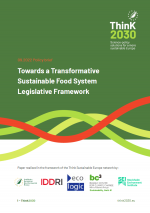 This Think 2030 policy brief is divided into five parts. Section 1 addresses what a sustainable agri-food system should look like according to the scientific literature and how a Sustainable Food System (SFS) law could better align EU food systems with the evidence. Section 2 explores the potential objectives of such a law and how a sustainable EU agri-food system could be defined. Section 3 discusses the architecture of the law, and section 4 explores the need for a multi-level governance framework involving Member States. Finally, the conclusion considers possible political pathways to achieving an ambitious SFS law. The policy brief is available for download.

This Think2030 policy brief highlights the importance of adopting an ambitious EU nature restoration law – given the manifold benefits of restoration for nature, people, and the economy – and discusses what is needed to ensure that the restoration targets are achieved by Member States. It formulates a series of recommendations for Member States and the EU institutions to facilitate the successful implementation of the upcoming law. This policy brief was jointly prepared by IEEP, The Green Tank, Ecologic Institute and IDDRI. It is available for download.

Why an EU Framework for Sustainable Food is Crucial for Climate, Biodiversity and Competitiveness – Op-ed

In her plans for 2023 addressed to the EU Parliament, President of the EU Commission von der Leyen did not mention the proposal for a Sustainable Food System legislative framework (SFSF). This led to speculation about the timeframe of this key proposal, which has been put forward as a cornerstone of the EU Green Deal for the agri-food sector. This op-ed, co-signed by members of the Think Sustainable Europe network, underlines the importance of the SFSF to be proposed next year to drive a sustainable transition of the EU food system, given the urgency of such a transition. The op-ed was signed by the TSE Executive Directors and is available online.

Towards an International Agreement on Plastic Pollution: The Role of the G20 – T20 Policy Brief

This policy brief investigates the gaps in the existing international treaties on marine plastic pollution and proposes components that need to be considered in a new treaty. These proposals will complement the G20 work on plastic pollution. As the 2022 G20 Summit will be held in Indonesia, the focus of this policy brief is not only relevant for G20 countries, but also for Southeast Asia as the largest contributor of marine plastics. The policy brief is available for download. 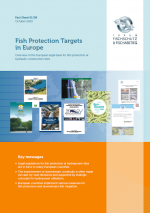 In the years 2020-2022, six fact sheets on fish protection and downstream migration have been developed in German. Four of them are now also available for download in English: 01 - Fish Protection Targets in Europe, 03 - Evaluation of primary injury to fish at hydropower sites, 04 - Technical functionality of large fish protection screens confirmed in practice and 05 - What makes a screen to a fish protection screen?

Dr. Stephan Sina, Senior Fellow of Ecologic Institute, gave a speech at the international academic conference "Towards the Polish Climate Protection Act" on 7 September 2022 in Szczecin (Poland). He presented the main features of the German Federal Climate Change Act and its revision following the decision of the Federal Constitutional Court on 24 March 2021. He also participated in the panel discussion.

McKenna Davis, Senior Fellow at Ecologic Institute, held a keynote speech at the conference "Designing Urban Spaces with Nature" on 7 September 2022 in Eindhoven (the Netherlands). She spoke about the integration of nature-based Solutions (NBS) across key European policy initiatives as a framework for enhancing local NBS action, building on her work for the European Environmental Agency and Naturvation project. She also highlighted good practice examples of policy instruments supporting NBS in the Netherlands. They are part of the Urban Governance Atlas currently being developed within the INTERLACE project. Her presentation slides are available for download.

Climate scenarios indicate that emission reductions are the backbone of climate action. However, CO2 removal (CDR) also plays an important role. The Intergovernmental Panel on Climate Change (IPCC) calls CDR "unavoidable". This webinar presented and discussed a report by Ecologic Institute on national frameworks for CDR. The report assesses the CDR policy frameworks of all 27 Member States and makes recommendations on how to improve them. The presentation slides of Dr Nils Meyer-Ohlendorf shown in the webinar and the underlying report are available for download.