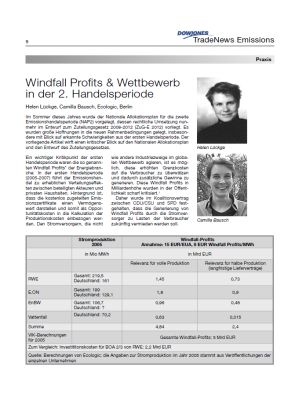 A critical discussion of the German National Allocation Plan and the draft allocation act
The European Emissions Trading System is a central pillar of German climate policy. After its introduction in 2005, some weak points, however, became obvious so that great hopes were pinned on the National Allocation Plan for the second trading period (NAP II). In their article for DowJones TradeNews Emissions, Helen Lückge and Camilla Bausch discuss if the German NAP II fulfils its economic objectives.

The National Allocation Plan for Germany for the second trading period 2008-2012 aims at reducing the unwanted distributional effects of the emissions trading system and to strengthen the competition on the German energy market.

Several option have been discussed which could help to prevent the unwanted distributional effects.The shift to auctioning of at least a part of allowances was the favourable option from an economic point of view: through the grandfathering approach, power suppliers generate high windfall profits which could be avoided with the help of auctioning. The first part of the article discusses if the approach which has been chosen for the German NAP II – a differentiated consideration of the sectors energy and industry – can also reduce the distributional impacts.

Based on this analysis, the analysis focuses on the impacts of the German NAP II on competitiveness. Especially the rules for new installations which will start operating in the second trading period can considerably influence investment decisions. It is illustrated how the transfer rule and the rule for additional new installations affect the competitive conditions between existing and new market players.

Legal Implementation of the European Directive on Emissions Trading