Climate change is one of the main concerns of our modern civilisation. Agriculture is commonly estimated to be responsible for 9% of total greenhouse gases (GHG) emissions. The research project PICCMAT aimed to identify farming practices that reduce greenhouse gas emissions, and to suggest policy instruments to support the necessary changes in land management to stakeholders and policy makers.

Agriculture is the main source of two major greenhouse gases - nitrous oxide and methane – and thus contributes considerably to climate change. On the other hand, there is a large potential for climate change mitigation in agriculture through carbon sequestration into soils. The PICCMAT project, initiated by the European Commission through its sixth Framework Programme for Research and Technological Development, was developed by an international consortium of research and consulting organisations in order to support policy-making in Europe in reducing the climate change impact of European agriculture.

After an EU-wide screening of the existing scientific literature, the team members assessed the effectiveness (feasibility and cost efficiency) for climate change mitigation of a range of possible changes to land management practices. The most promising mitigation options were then tested in the field through case-studies in six European agricultural regions, with the aim to identify potential barriers to their implementation and incentives that could be set by policies. Based on these results, the PICCMAT partners developed a set of policy recommendations for EU-level policy making.

Consultation with stakeholders and communication of the results to the interested public were a key element of PICCMAT. Relevant stakeholders, in particular farmers, policy-makers at EU and national level, and environmental organisations, were consulted through a workshop in Brussels and an online survey.

The final symposium of PICCMAT on 28 October 2008 in Brussles raised a high interest and attracted almost 90 participants. 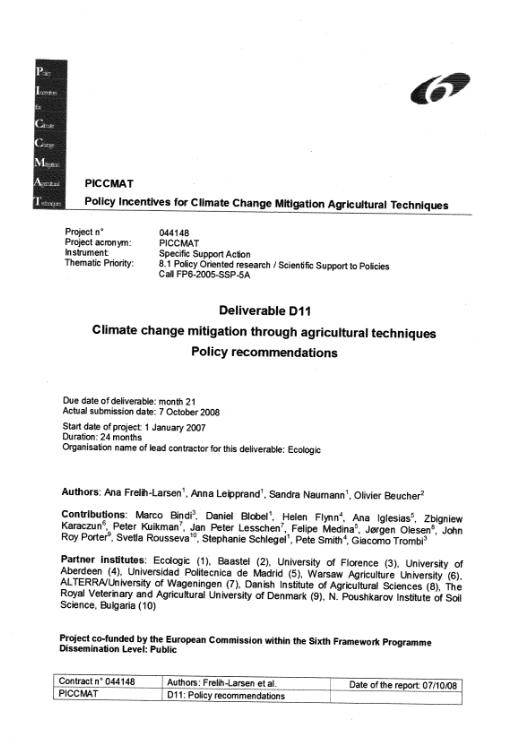 Read more
Event:Conference
The final symposium of the PICCMAT project (Policy Incentives for Climate Change Mitigation Agricultural Techniques) on 28 October 2008 in Brussels&nbsp;generated high interest among stakeholders. The agricultural sector will be under increased pressure in the future to contribute to the realization of ambitious climate change mitigation targets. Almost 90 participants from the farming, policy and scientific communities engaged in discussions on potential ways forward. The PICCMAT policy recommendations are available for download.

Symposium: Addressing the Climate Challenge - What can Agriculture do? Ideas from Europe and Beyond