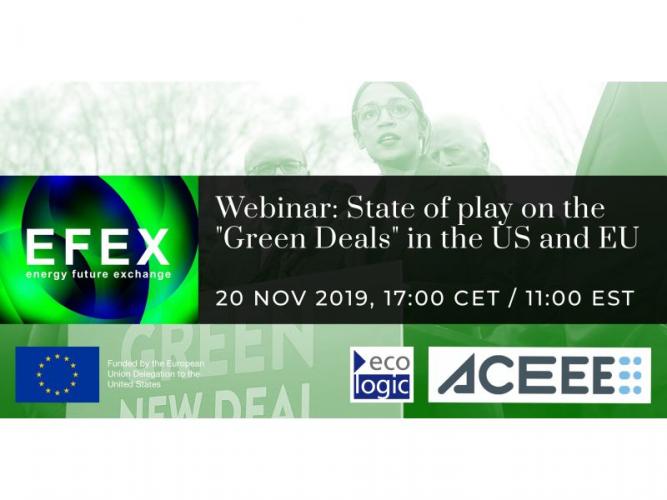 In recent months, proponents of more ambitious climate action have rallied behind the concept of a "Green New Deal" (GND) in the US – and the notion of a "European Green Deal" is now on the agenda in the EU. But what would such green deals imply? Originally, the concept recast President Franklin D. Roosevelt's famous response to the Great Depression (the "New Deal" of 1933-36) as a solution to both the climate crisis and economic inequality through the marriage of renewable energy and energy efficiency policies with major infrastructure projects as well as social and economic reforms.

In the United States, where the idea first gained more attention, it is represented by a pair of sweeping resolutions passed in the House of Representatives on 7 February 2019. However, the resolutions, which called for deep, economy-wide cuts in emissions by 2050 and unprecedented investment in renewable energy, were stopped cold in the Republican-controlled Senate. In Europe, incoming European Commission President, Ursula von der Leyen, has made climate policy a priority for her first 100 days in office and appointed Frans Timmermans as Executive Vice-President for the European Green Deal – a position that previously did not exist. This has elevated the notion of a Green Deal, which continues to be rather vague, to new political heights – and requires now, that it be filled with life.

In this EFEX webinar Doug Sims, Director of Strategy and Finance at the Center for Market Innovation (Natural Resources Defense Council), and Quentin Genard, Head of the Brussels Office at E3G (Third Generation Environmentalism), discussed the existing and evolving concepts behind a "green deal" in the US and EU, identified differences and similarities and debated pros and cons. The discussion then shifted to policy details, more specifically the proposed funding mechanisms for a new deal in both the US and EU (or lack thereof). The webinar was moderated by Matthias Duwe, Head, Climate, at Ecologic Institute.

The Energy Future Exchange (EFEX) project is a joint initiative by Ecologic Institute Berlin, Ecologic Institute US and ACEEE funded in part by the EU Delegation to the US, with the goal of supporting and promoting transatlantic dialogue among civil society on issues vital to the EU-US relationship. More information can be found at energyfuturex.org and on Instagram @energyfuturex.

In this EFEX webinar, Michael Mehling, Deputy Director of the Center for Energy and Environmental Policy Research at MIT, and Matthias Duwe, Head Climate at Ecologic Institute, discussed the state of play of climate framework laws, drawing on specific examples from the EU and the sub-national level in the US and experiences in other parts of the world. The webinar was moderated by Arne Riedel, a Fellow and legal expert at Ecologic Institute.

Governing for 2050: Climate framework laws in the EU, the US and beyond

Read more
Event:Dinner Dialogue
The European Union and the United States share many values, principles and interests, and there is a rich tapestry of transatlantic relations at many levels and across a range of policy fields. At present, however, on climate change and climate action, – as well as other important areas of policy – the EU and the US are pulling in different, sometimes opposite directions. Led by keynote comments from author and academic Bruce Stokes, a small group of experts engaged in a round-table discussion to explore the prospects for post-election transatlantic relations and cooperation across a range of related policy fields.

How Will the Climate for Transatlantic Cooperation Change Following the 2020 US Election?

Read more
Event:Visitors Program
From 22 to 28 September 2019, the Energy Future Exchange (EFEX) Program invites civil society leaders from the EU and US to join the EFEX Study Tour and experience the Future of Energy.

In this EFEX webinar Marijke de Roeck, lead project coordinator of the CIVITAS Portis initiative and Katia Kishchenko, local dissemination manager, discussed sustainable mobility in the city of Antwerp (Belgium). Their presentation touched on the importance of improving cooperation between relevant bodies – in the case of Antwerp, the port and municipal authorities – as well as the city's growing experience with shared mobility services. They also discussed major findings of the CIVITAS Portis project regarding transport choices and behavioral change. The webinar was moderated by Matthias Duwe, Head Climate at Ecologic Institute.

Read more
Event:Digital Event
This EFEX webinar explored the success of stakeholder participation in the National Energy and Climate Plans (NECP) preparation process as well as its scope, best practice examples and value added for EU climate policy. A panel of expert speakers – Elisa Martellucci and Agnese Ruggiero of Carbon Market Watch and David Donnerer of Energy Cities – drew on their experiences with the PlanUp project to discuss the EU perspective as well as the dialogues it organized between stakeholders and ministry officials. The online panel was moderated by Matthias Duwe, Head Climate at Ecologic Institute.

Read more
Event:Conference
On 24 September leading voices from European Union and United States civil society converged on the Square in Brussels to share ideas and experiences to move the transatlantic energy transition forward in pursuit of a clean, climate-friendly energy future. Presentations, videos and photos are available on the conference website: https://www.energyfuturex.org/portfolio/bruconference/.

Read more
Event:Digital Event
In January 2019, a stakeholder commission established by the German government agreed upon a schedule to decommission coal-fired power plants by 2038 at the latest and a framework for financial assistance to regions affected by the transition. Environmental groups have argued for years that Germany will not get back on track to its climate targets if it does not tackle the coal question. However, as a historic ingredient of Germany's industrial might, coal as source of energy was considered taboo for policy-makers until recently. How did this major paradigm shift come about – and what made an agreement among different stakeholders possible?

Read more
Event:Visitors Program
The EFEX study tour from 25 to 29 June 2018 complements our 2018 International Symposium on Energy Efficiency with an in-depth exploration of energy lighthouse projects in the US American capital region. The program includes presentations and field trips on topics ranging from energy efficiency to renewable energy and sustainable mobility, with a special focus on the interconnections between these sectors. The program is designed for civil-society participants from the United States and Europe. The Ecologic Institute US is the lead organizer for the study tour. Applications are still open.

Read more
Event:Conference
On 26 June 2018, the International Symposium on Energy Efficiency will bring together leaders from all over the globe as part of the EFEX project to talk about the ways in which energy efficiency has proven to be not only a tool for meeting environmental and sustainability goals and commitments but also an opportunity to increase participation and prosperity in all segments of society. Registration for the conference is open, and you can still get in at the discounted early bird rate. You'll find further information including registration details on the symposium's website.

EventDigital EventGoverning for 2050: Climate framework laws in the EU, the US and beyond

Policy-makers around the world are facing a significant challenge in the context of the climate crisis: how can they manage to trigger and monitor the transformation to a climate-friendly economy in the space of a few decades? The Paris Agreement has reinforced the need... Read more

Digital Event:Governing for 2050: Climate framework laws in the EU, the US and beyond

Procuring sustainable urban transport systems in cities around the world is a challenge made all the more difficult by rapidly increasing levels of urbanization and congestion. Already, promising changes to existing systems to make room for car and bike sharing and a... Read more

EventDigital EventStakeholder Engagement in the EU: Preparing National Energy and Climate Plans
Required by the EU Governance Regulation, National Energy and Climate Plans (NECPs) form the basis of the near-term European effort to combat the climate crisis and signal both the speed and direction of the transition to a low-carbon economy. The road to net zero... Read more

EventDigital EventThe Future of Coal – The Economics and Politics of the German Coal Phase Out
In January 2019, a stakeholder commission established by the German government agreed upon a schedule to decommission coal-fired power plants by 2038 at the latest and a framework for financial assistance to regions affected by the transition. Environmental groups have... Read more

Digital Event:The Future of Coal – The Economics and Politics of the German Coal Phase Out