The project Legal Instruments to implement the objective "Land Degradation Neutral World" in International Law was commissioned by the German Federal Environmental Agency. It aimed to explore the legal instruments in three different case study countries which could potentially be up-scaled to the international level to implement the land degradation neutrality target. The findings were translated into a breakdown of conceptual legal approaches to land degradation prevention, remediation/offsetting, and planning.

Land resources are under threat from various pressures, including increasing global populations, urban sprawl, waste disposal, unsustainable exploitation, intensification of use, and climate change. There has been international acknowledgement of the need to preserve existing land resources in an effort to ensure food security, ecosystem services, and biodiversity by preventing land degradation. Additionally, the need to restore the increasing amount of degraded lands has been highlighted.

The international community incorporated the land degradation neutral world (LDNW) target into the final outcome document to the Rio+20 conference “The Future We Want” in 2012. Subsequently, discussions regarding how this target should be carried forward and incorporated into the Sustainable Development Goals (SDGs) began and the United Nations Convention to Combat Desertification (UNCCD) also initiated discussions about the target's incorporation into international legal obligations under the Convention.

This study was commissioned in order to contribute information on various existing mechanisms which could be upscaled into international obligations based on analysis of three different case study countries: the United States, Brazil, and the EU/Germany. The most relevant national legislative instruments (as well as some soft-law instruments) contributing to prevention, remediation/offsetting, and planning of land degradation were analysed, particularly focusing on the soil threats of erosion, contamination, sealing, and salinisation.

On the international scale, the United Nations Framework Convention on Climate Change (UNFCCC), the Convention on Biological Diversity (CBD) and the UNCCD were analysed for their existing provisions as well as gaps related to land degradation prevention, remediation/offsetting, and planning. The legal possibility of incorporating the target under the different agreements was also analysed with regards to amendment and addition of a new protocol. Finally, the conceptual approaches and legal mechanisms from the country case study analyses were assessed as to whether they would be potentially useful for international upscaling.

The report identifies multiple general legal mechanisms which would potentially be appropriate for upscaling into international law in order to contribute to prevention, remediation/offsetting, and planning against land degradation. 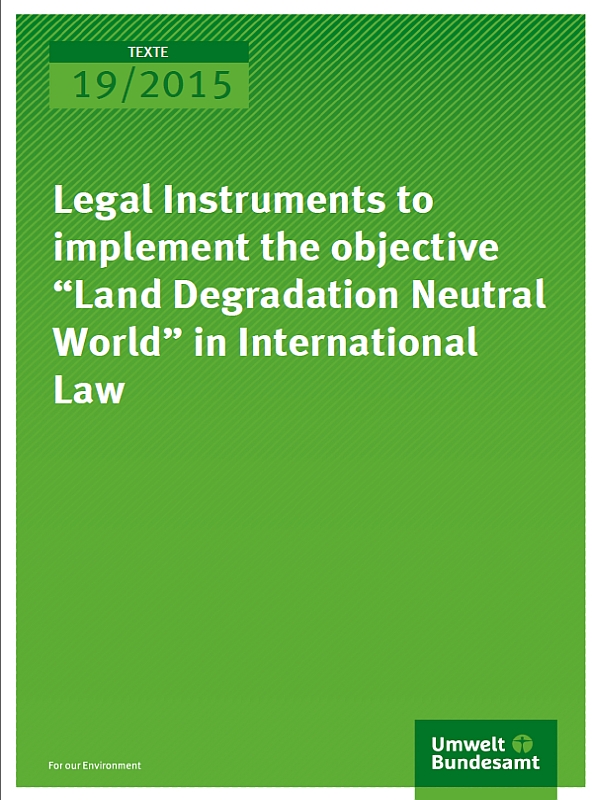 Both the Baltic Sea Action Plan and the EU Water Framework Directive require substantial further reductions of nutrient loads (N and P) to the Baltic Sea during the coming years. Achievements of these goals will only be possible by the implementation of fundamental... Read more

ProjectFP 7Land and Ecosystem Degradation and Desertification: Assessing the Fit of Responses (LEDDRA)
The Ecologic Institute is a part of LEDDRA consortium. Launched in April 2010, the project will add new and will refine existing scientific and policy-relevant knowledge, especially within a cross-national context in the perspective of elaborating scientifically sound... Read more

Land and Ecosystem Degradation and Desertification: Assessing the Fit of Responses (LEDDRA)

PresentationSpeechPolicy Recommendations - Findings from the LEDDRA Project
Ruta Landgrebe-Trinkunaite, Ecologic Institut
The LEDDRA research demonstrated that land and ecosystem degradation and desertification (LEDD) does not only result from ineffective design and implementation of environmental policies. Effective responses should also seek to address a range of socio-economic concerns... Read more

ProjectRNE – Global and National Sustainable Development Goals and Expectations to the Institutions and Processes in Germany
| fotolia © Ericos
In September 2015, the United Nations is expected to adopt the Post-2015-Agenda, which will contain universal goals for sustainable development. This agenda will not only set objectives for developing countries but will also address industrialised countries and their... Read more

ProjectFP 7Biodiversity and Sustainable Development in the EU's Outermost Regions and Overseas Countries and Territories (NetBiome-CSA)
Fotolia©Sascha Burkard
The NetBiome-CSA project aimed at extending and strengthening research partnerships and cooperation for smart and sustainable management of tropical and subtropical biodiversity in the EU’s outermost regions (ORs) and overseas countries and territories (OCTs). Ecologic... Read more

ProjectMonitoring the EU Sustainable Development Indicators
| fotolia © Yvonne Bogdanski
The European Commission regularly tracks the progress towards sustainable development objectives within the EU and the individual Member States, drawing upon sustainable development indicators (SDIs). In a consortium with the Vienna University of Economics and Business,... Read more

Ecologic Institute and Stiftung Wissenschaft und Politik (SWP) prepared a paper that gives an overview of selected sustainable development commitments, their shortcomings, and possible remedies, as discussed and agreed by relevant political fora. The paper and the... Read more