From 4 to 15 July 2016, the 16th ICAP Summer School on Emissions Trading brought together experts from emerging economies and developing countries to learn about emissions trading as a tool for climate protection and to discuss the options and experiences of implementing such systems in developing countries. The Brussels course was the sixteenth of its kind since 2009. 28 mid-career professionals from eleven countries attended the course, which was facilitated by Benjamin Görlach and Matthias Duwe of the Ecologic Institute.

Besides the facilitating role, the Ecologic Institute also designed the curriculum and organized the course logistics, which was carried out under the auspices of the International Carbon Action Partnership (ICAP). The Institute for European Studies (IES) at the Free University of Brussels kindly hosted the course and contributed speakers for different sessions. ICAP is a forum of 29 national and regional governments and jurisdictions, including several EU countries, the European Commission, as well as a number of US states and Canadian provinces, Australia, New Zealand and Tokyo Metropolitan Government (TMG), aiming to advance international cooperation on carbon markets. The Summer School was funded by the European Commission, which also contributed several of its staff members as speakers.

During the two-week course, participants gained an in-depth understanding of the design and implementation of carbon trading systems as a tool to mitigate greenhouse gas emissions. They had the opportunity to discuss various aspects of emissions trading with experienced practitioners from the European Commission, the Netherlands, Austria, Belgium, France and Tokyo. The faculty also included experts from academia, think tanks and the private sector in North America and Europe, as well as representatives of business associations and companies covered by the EU ETS.

Course topics addressed during the two weeks included the economics of climate change, choosing and combining policy instruments for climate protection, design and scope of emissions trading, allocation mechanisms, GHG inventories and registries, emission monitoring, reporting and verification, the link of domestic ETS to the international climate regime, carbon market dynamics, stakeholder involvement, and other advanced aspects of ETS design and implementation. In discussing these issues, the course relied on interactive formats and group work, and made ample use of first-hand experience gained with the existing trading schemes in Europe, North America and the Asia/Pacific region.

The Brussels Summer School was the 16th of its kind. Since their inception in 2009, the Ecologic Institute has organised these events in various cities around the world - including Berlin, The Hague, Beijing, Madrid, Dublin, Alajuela, Rotterdam, Istanbul, Santiago de Chile, Paris, Mexico City, Seoul, London and São Paulo.

Ecologic Institute organised the 16th edition of the ICAP Summer Schools and Training Courses on Emissions Trading in Brussels, July 2016

Emissions Trading in China and Europe: Taking Stock, Thinking Ahead, Looking Beyond

Read more
Event:Summer School
Ecologic Institute organized the second ICAP Master Course on Emissions Trading in Lisbon (Portugal). The two week-long course brought together 30 experts from emerging economies and developing countries to learn about emissions trading systems (ETS) as a tool for climate protection, and to discuss the options of implementing or optimizing such systems in their home countries.

Read more
Event:Summer School
In May 2017, Ecologic Institute organised the 17th ICAP Training Course on Emissions Trading in Bangkok (Thailand). The course brought together experts from emerging economies and developing countries to learn about emissions trading as a tool for climate protection, and to discuss the options of implementing such systems in developing countries. The session continues a series of past ICAP events that Ecologic Institute organised across the world since 2009. Twenty-seven mid-career professionals from seven Asian countries as well as Benjamin Görlach and Pedro Barata led the course.

Read more
Event:Summer School
From 3 until 12 May 2016, the 15th ICAP Training Course on Emissions Trading brought together climate policy professionals from Latin America to learn about emissions trading as a tool for climate protection and to discuss the options of implementing such systems in Latin America. The São Paulo course was the fifteenth of its kind and continues a series of past ICAP events held around the world since 2009. 25 mid-career professionals from seven Latin American countries attended the course, which was facilitated by Benjamin Görlach and Pedro Barata led the course.

Read more
Event:Digital Event
In the third installment of the webinar series accompanying Ecologic Institute's ETS e-learning program, moderated by Elizabeth Zelljadt, expert guest speaker Duan Maosheng (Tsinghua University) commented on China's pilot carbon markets and experiences in becoming ETS "market ready." He provided unique examples of capacity gaps that were overcome and others that remain a challenge, shedding light on China's plans for a nationwide ETS to begin in 2017.

Read more
Event:Digital Event
In this second webinar in the series accompanying our ETS e-learning program, moderated by Ecologic Institute's Elizabeth Zelljadt, expert guest speaker Damien Meadows of the EU Commission discusses how the EU ETS came to be, changes to its structure over time, and the evolution of emissions trading systems in the future. 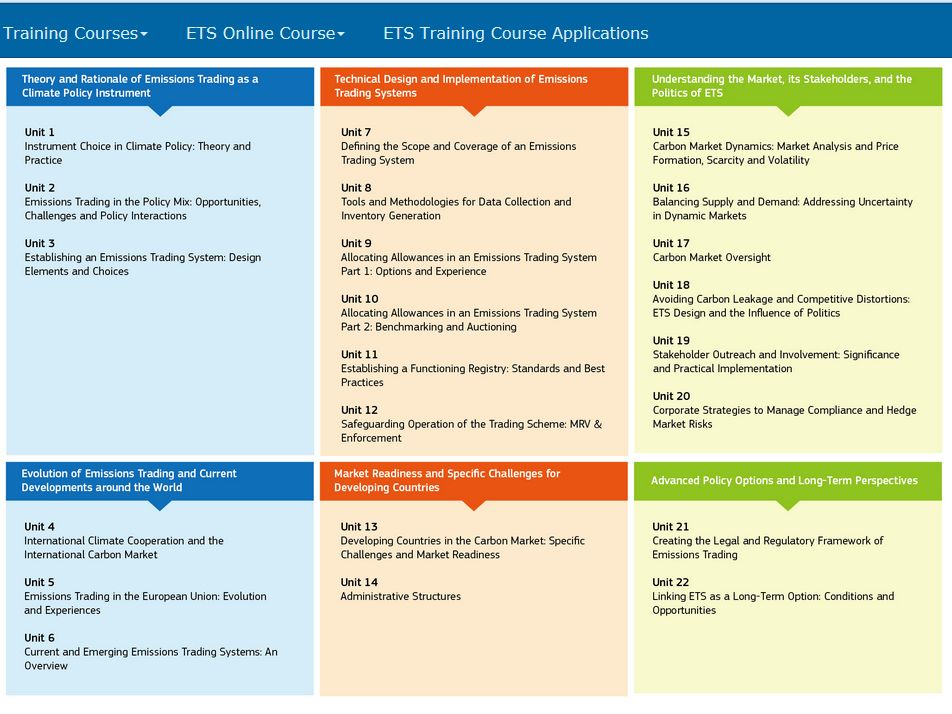 This online platform is part of an ongoing ETS Summer University program that helps to meet the growing need for improved understanding of emissions trading as an instrument of climate policy in emerging economies and developing countries. The curriculum and corresponding activities are organized into course modules, which allows for differentiation and flexibility in the learning process. Participants from all over the world learn the material online for free with the aid of supplementary webinars that feature interactive, question-and-answer sessions with subject matter experts. Ecologic is responsible for large parts of the course content and coordination among the subject matter experts.

Read more
Event:Digital Event
With this webinar, the consortium in charge of the European Commission's e-learning on emissions trading officially launches its free online course. The topic of this session, moderated by Ecologic Institute's Elizabeth Zelljadt, is "carbon market dynamics and risks" and features guest speaker Marcus Ferdinand of Thomson Reuters.

EventSummer SchoolICAP Training Course on Emissions Trading in Beijing
Michael Mehling bei der Begrüßung des ICAP-Trainingskurses in Peking
In May 2014, the 7th ICAP Training Course on Emissions Trading brought together 25 experts from China and South Korea to learn about emissions trading as a tool for climate protection and to discuss the options of implementing such systems in developing countries. The... Read more

Environmental policy-makers and stakeholders from the non-governmental, academic and private sectors convened in The Hague, The Netherlands from 26 July to 6 August 2010 as part of the second ICAP Summer School for Emerging and Developing Countries. The intensive two... Read more

Environmental policy-makers and stakeholders from the non-governmental, academic and private sectors from 19 countries gathered in Berlin from 27 July to 7 August 2009 in the first ICAP Summer School for Emerging and Developing Countries. The intensive two-week training... Read more