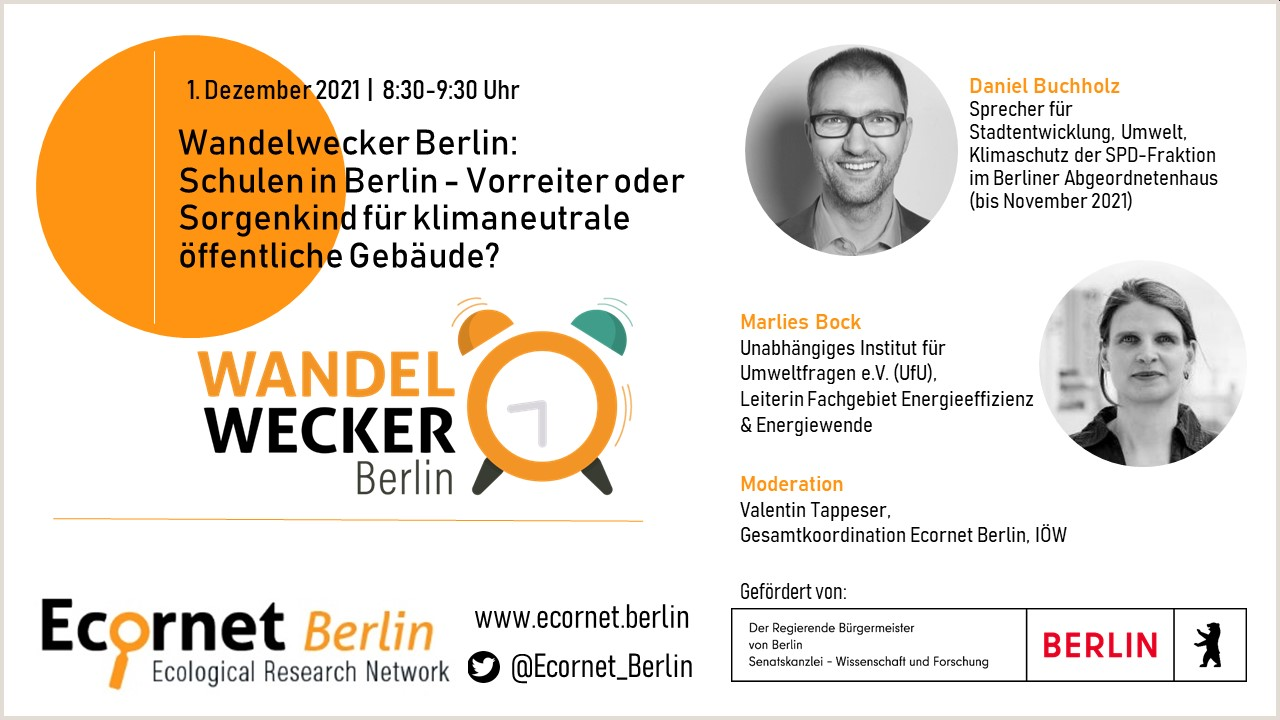 Berlin has set ambitious standards for the prevention of CO2 emissions, with significantly stricter targets in the new Climate Protection Act (EWG Bln). What are the targets and opportunities, and what are still the major challenges and barriers? In order to become climate-neutral, it is imperative that the building sector be given greater consideration. The Climate Protection Act and the Berlin Energy and Climate Protection Program (BEK) 2030 emphasize the exemplary role of the public sector in this area. This means that public buildings such as school buildings are a key factor. In the districts' renovation roadmaps, schools sometimes account for more than 80 percent of the buildings that need to be renovated for energy efficiency in the next few years.

For many of these buildings, planning is already underway, for example as part of Berlin's school construction campaign, and in some cases work has already begun. In this Wandelwecker, we provide an overview of the status quo and the specifications in the area of construction and renovation of public buildings in Berlin and pose the question whether the path taken for school buildings will be sufficient to achieve the climate protection goals or whether the current approach will lead to many buildings having to undergo energy refurbishment again in a few years. Particularly in view of the future state government, in which many new players will be dealing with the issue, we want to use this impulse to help Berlin's schools live up to their exemplary role and make a contribution to achieving climate neutrality in the building sector.

In the eighth issue of Wandelwecker, our morning impulse for a social and ecological metropolis, we discuss with two experts:

Is Berlin able to build and modernize its public buildings in a climate-neutral way?
Visit Profile 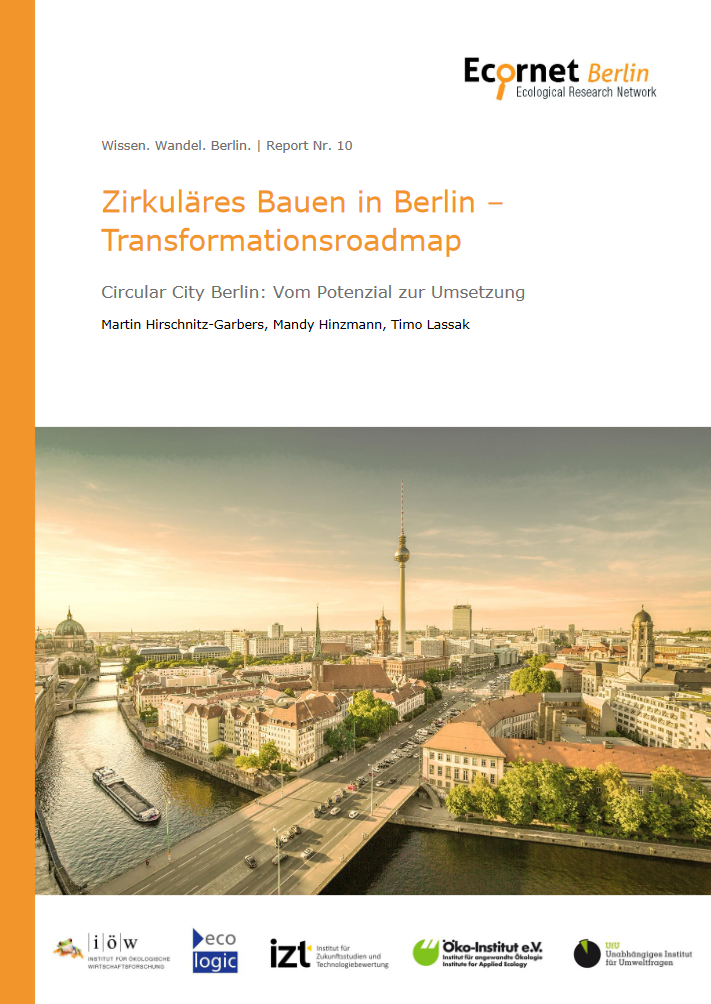 Promising approaches were identified via participatory stakeholder workshops, that could contribute to establishing circular construction in Berlin. Such approaches include a stronger orientation of the legal framework towards the circular economy, for example through an obligation to selective deconstruction in the Berlin Building Code. On the other hand, there is a need for even stronger public procurement of circular approaches in the building sector by facilitating the consideration of life-cycle costs in procurement practice. With the combination of these approaches, it seems possible to establish Berlin as a Circular City in the building sector in the long term. 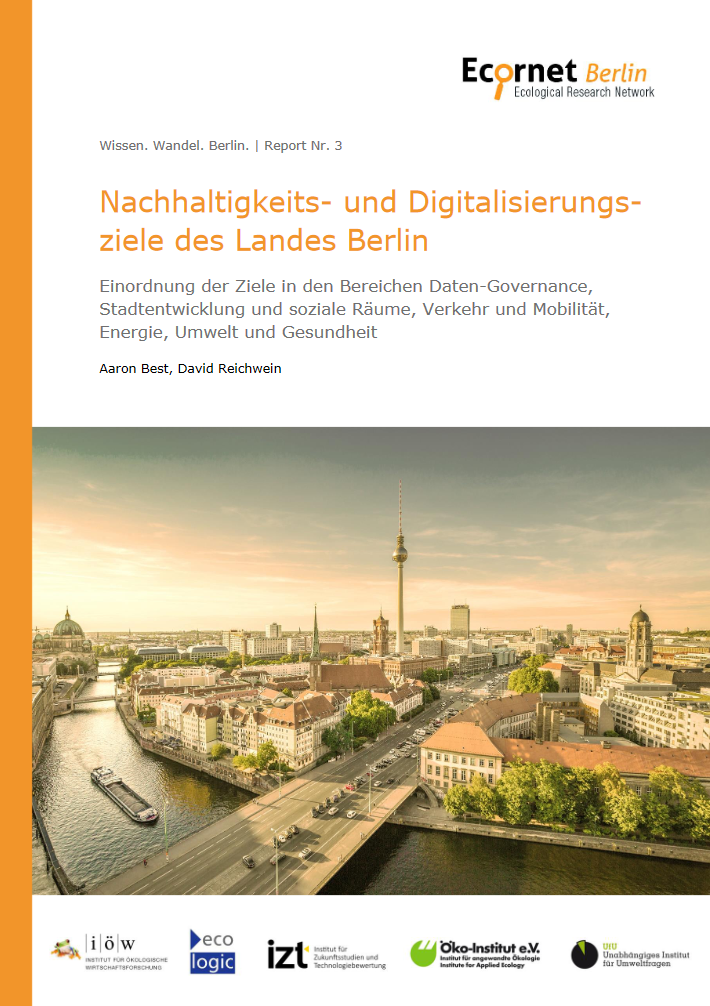 This background paper for the research project "Digitalisation – Setting the Course for a Social-Ecological Digital Transformation in Berlin" within the project "Knowledge. Change. Berlin" provides an overview of the sustainability and digitalisation goals of the state of Berlin. First, the paper outlines sustainability goals relevant for the project in the following topic areas: data governance, climate protection, transport and mobility, energy and health.

Read more
Project
The project "Data Governance and Regulation for a Sustainable Berlin" examines what forms of data regulation are possible and necessary at city level in Berlin to ensure that data-driven services, products and platforms are developed and used to meet social and environmental sustainability goals.

Data Governance and Regulation for a Sustainable Berlin 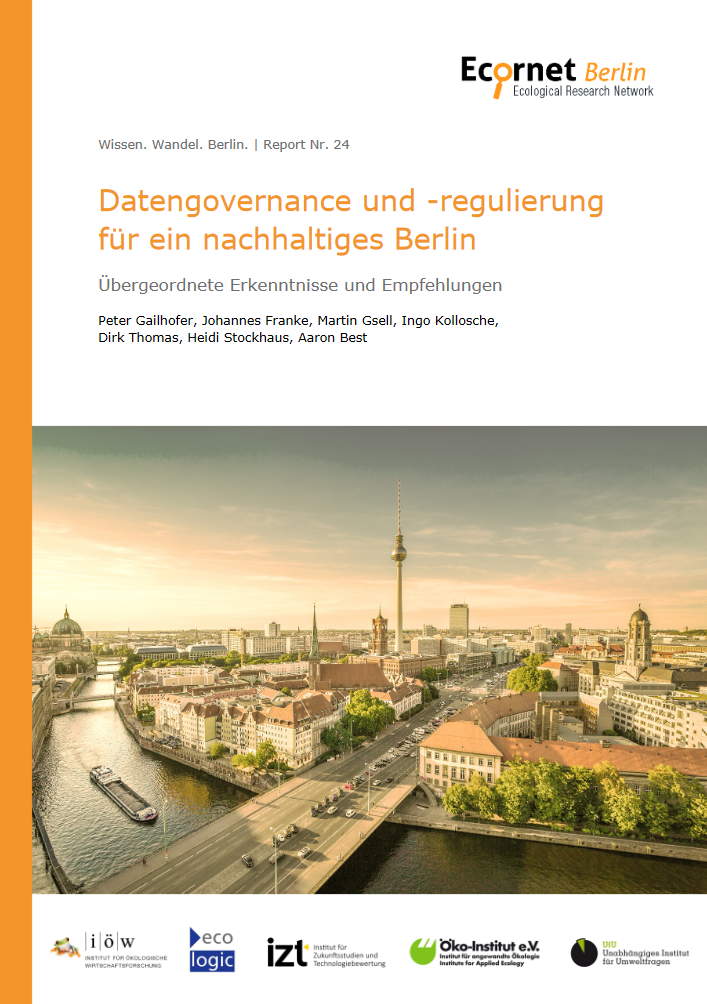 This paper describes important findings from the project "Data Governance and Regulation for a Sustainable Berlin" and formulates – in addition to the application field-specific papers – overarching recommendations. 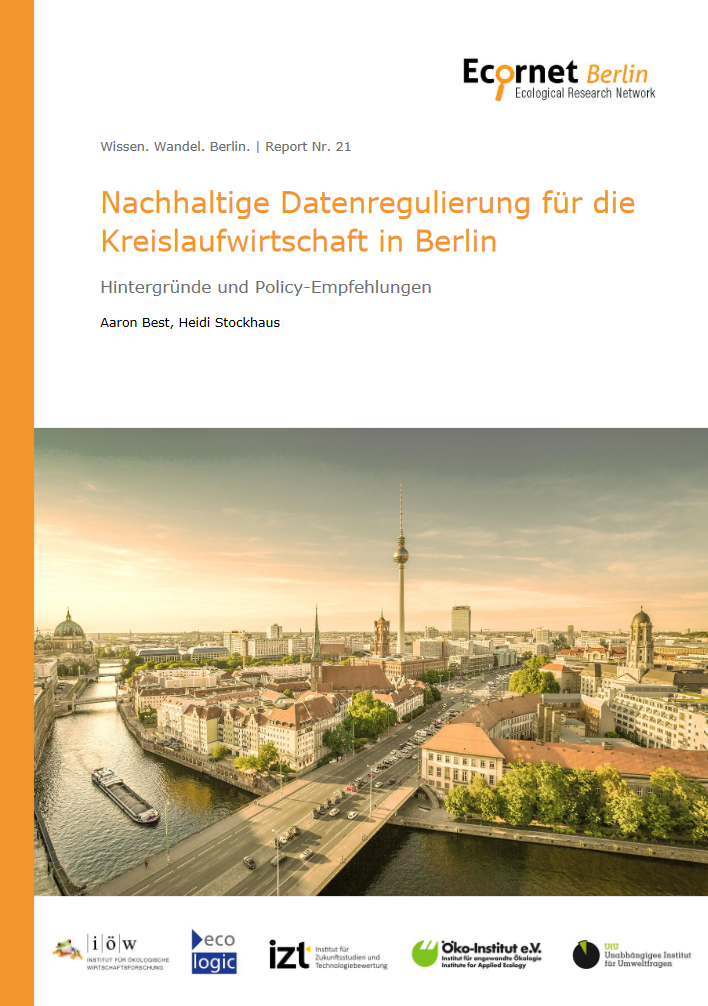 This paper examines the concept of an "extended" digital product passport from a socio-ecological perspective using the example of batteries for electric vehicles. It evaluates different approaches to data regulation and formulates policy recommendations for decision makers in Berlin. It is based on preliminary work from the project, in which in particular three ideal types of data regulation and a methodology for their scenario-based evaluation were developed. 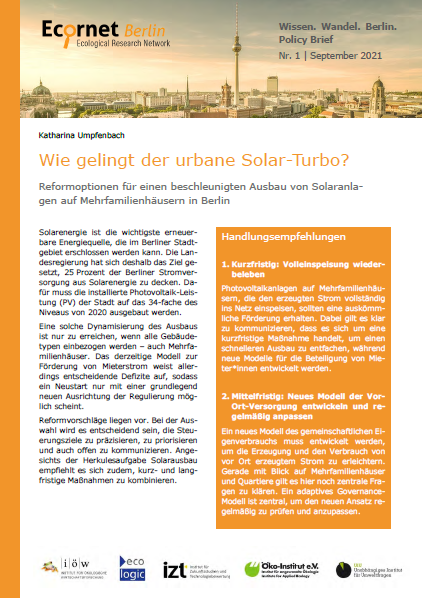 This policy brief examines current proposals for the further expansion of photovoltaics. It shows that the two central goals – accelerating the PV expansion and involving residents – are in tension with each other, at least in the short term. Based on the analysis, the following sequence of measures is proposed: First, as an immediate intervention, PV plants that feed all of their electricity generation into the grid should be made economically viable again. 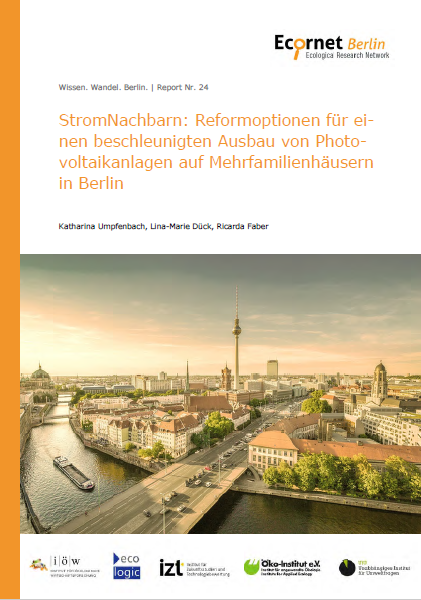 This study examines current proposals for the further expansion of photovoltaics and analyses the solutions used in Spain, the Netherlands and Austria. It shows that the two central goals – accelerating the PV expansion and involving residents – are in tension with each other, at least in the short term.

Read more
News
The city of Berlin has many plans when it comes to climate protection. One major roadblock is the heating transition: To become climate-neutral by 2045 at the latest, around 360,000 residential and non-residential buildings in the capital must be supplied with environmentally friendly space heating and hot water. Furthermore, all new buildings must be planned and constructed in a way that conserves resources. In addition to the organizational and technical challenges involved in achieving a climate-friendly heat supply, a key question is how this can be achieved in a socially just manner that ensures rental prices remain affordable for low-income groups as well. On 2 November 2021, five leading Berlin institutes in sustainability research will contribute to the conference "Knowledge. Change. Berlin. 2021" Solution Approaches for Climate-Neutral Housing and Construction and invite stakeholders from the city to the discussion.

Climate Neutrality: Berlin Discusses the Future of Housing and Construction

Read more
Event:Conference
In the Ecornet Berlin research partnership, five Berlin institutes of transdisciplinary sustainability research are jointly providing impetus for Berlin's transformation. Their annual conference "Knowledge. Change. Berlin. 2021" brought current research findings into dialogue with experiences from other cities and the voices of Berlin's practitioners and civil society – for a social and ecological capital.