Impacts of Climate Change on the Swiss Economy
Print

In response to new scientific results on global climate change and its impacts for human societies (Stern Review 2006, Fourth Assessment Report of IPCC), and as a contribution to the debate on international climate protection efforts after 2012, Switzerland has published a new strategy on its future climate policy in August 2007. Ecologic contributed to one of several studies that formed the basis for the development of this strategy. The study as well as related material is available for download.

The impacts of global climate change may significantly damage the global economy. The 2006 Stern Review estimates that global GNP (gross national product) will be reduced by 5% as a consequence of climate change, while the costs for stabilizing greenhouse gas emissions would only amount to 1% of global GNP.

Climate change can impact on national economies through a variety of causal effects. On the one hand, direct climate change impacts will be felt in Switzerland, for instance with regard to tourism, agriculture, forestry, and water management. However, national economies will also be influenced by changes in the global trade and financial markets caused by climate change impacts. For the Swiss economy, which is relatively small and embedded in a large network of international trade relations, these changes can be of great significance.

INFRAS and Ecologic, together with Rütter + Partner, have carried out a research project on behalf of the Swiss Federal Office for the Environment in order to assess the impacts of global climate change on the Swiss economy mediated through international trade relations and financial markets. To this end, an effort was made to identify the most important international channels through which climate change impacts in different world regions impact on the Swiss economy. Their relative importance was estimated, and impacts were assessed and, where possible, quantified. The methodology and project design for the study were developed in a preceding scoping study by INFRAS, Ecologic and the Potsdam-Institute for Climate Impact Research.

The final report [pdf, 1.8 MB, German] is available for download. 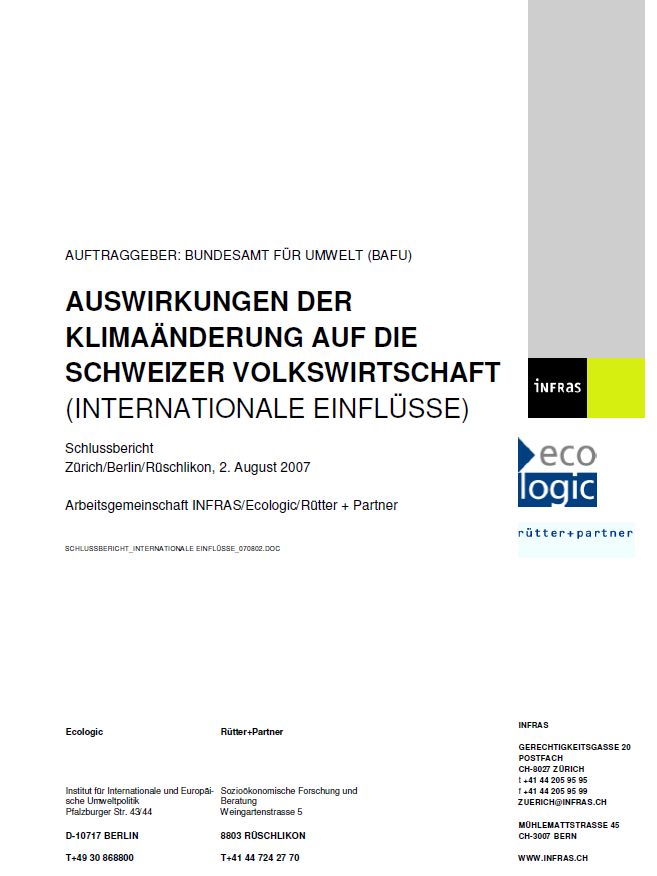 Report: Auswirkungen der Klimaänderung auf die Schweizer Volkswirtschaft
ProjectCosts of Climate Change
Costs of Climate Change
As the impacts of climate change are beginning to become visible, there is growing concern about the possible costs of inaction. However, before adequate assessments of the costs of climate change impacts can be made, there are various methodological questions to... Read more