In the wake of the global financial and economic crisis, Germany is facing its worst recession in post-war history. For the public budget, this implies a dramatic drop in tax revenue. At the same time, spending increased strongly because of the adopted stimulus packages and increased spending on social security systems. As a consequence, the German government will incur new debt to an unprecedented extent, exceeding even the record debts of the post-reunification years. At the same time, Germany - as other industrialised countries - faces the enormous challenges of restructuring towards a more sustainable, low-carbon economy. Against this background, Ecologic Institute and the German Institute for Economic Research are revisiting the concept of environmental budget reform, to assess the options for a greening of the tax and subsidy system, and to establish their contribution to the long-term transformation as well as to the consolidation of public budgets.

Economic instruments such as taxes, tradeable permits or subsidy reform promise to achieve both environmental and economic objectives by raising the cost of environmentally harmful activities and at the same time lowering the cost of labour. The general idea has been around for quite some time, and instruments like Germany's green budget reform efforts in 1999 - 2003 or the EU Emissions Trading demonstrate that such instruments work in principle - notwithstanding the widespread and often justified criticisms of their specific design and implementation.

However, the political context for the use of such instruments is now quite different to the late 1990s, when the first steps of an ecological tax reform were introduced in Germany. For instance, Gemany has adopter rather ambitious objectives in the fields of environment, climate protection and sustainable development. In the absence of further policy measures, Germany is not on track to meet all these objectives. At the same time, public budgets are severly affected by the economic crisis and its effects on tax revenues. In order not to burden future generations with more and more debt, substantial efforts will be necessary to reduce public debt in the coming years.

Confronted with this double challenge, environmental budget reform takes on a new significance. The primary justification for economic instruments is and remains that they create the conditions to achieve environmental objectives in the most efficient way. But can they also help to generate the revenue that is required to balance public budgets? How large can the contribution of environmental taxes reasonably be? And how would an environmental budget reform need to be designed in order not to jeopardise the economic recovery, but rather to enhance it and give it a new, green impetus?

These and other questions will be addressed in a study conducted by Ecologic Institute and the German Institute for Economic Research on behalf of the German Council for Sustainable Development. Interim findings of this study were discussed with 25 selected experts from academia, politics, business and civil society on 6 July 2009. The final report is available for download. 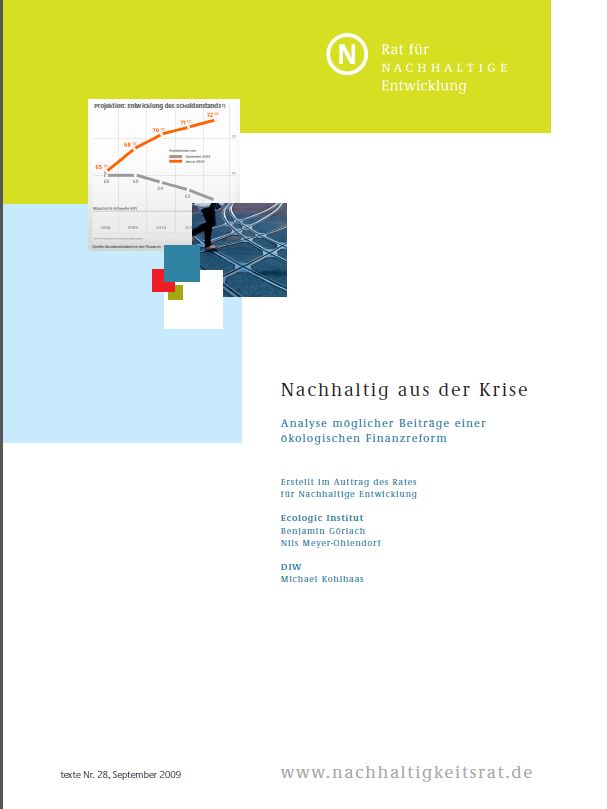 ProjectClimate Change and Public Finances
Climate Change and Public Finances
Climate change will alter the basis of economic activity in Germany. It will therefore also affect public finances. On behalf of the Federal Ministry of Finance, the Ecologic Institute and Infras explored the extent to which the economic impacts of climate change might... Read more

The Impact of Differential VAT Rates on Consumption and Innovation