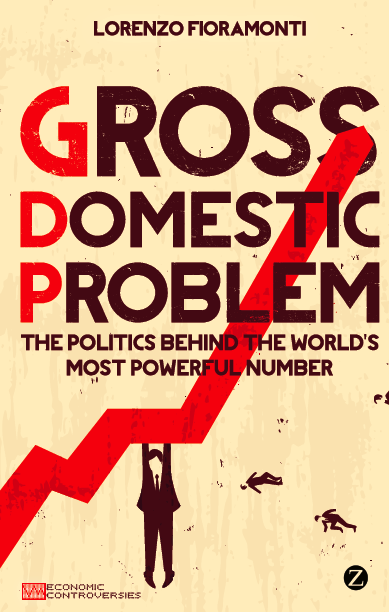 The Ecologic Institute invited Prof. Lorenzo Fioramonti from the University of Pretoria, South Africa, to introduce his new book "Gross Domestic Problem". This book about the "world’s most powerful number" (GDP) argues that the political interests behind GDP are an important reason why it has remained dominant as a welfare indicator.

Professor Fioramonti gave a brief presentation of his book, and then he was interviewed by the director of Ecologic Institute, R. Andreas Kraemer. The interview was followed by a lively discussion with the audience. Lorenzo works with Ecologic Institute in the FP7-funded project "Atlantic Futures".

The book’s key argument is that the substantial vested interests in favor of GDP influence its wide use as a welfare indicator, despite its well-known methodological flaws. The book explains the history of GDP and the competition between different methodological frameworks during the Cold War. Originally developed as a tool to guide an economy under extreme circumstances (e.g. the Great Depression and the Second World War), GDP and its policy impact have survived and expanded into the comparably more stable second half of the century. The number generated a powerful push towards "production at any costs" in global economies and societies, and in the process, this created significant interests groups that benefit from GDP’s dominance.

The discussion with Professor Fioramonti focused on political strategies to limit or break the power of the numbers and highlighted the need for local action to guide policy decisions away from its strong bias towards GDP.

The substantial vested interests in favor of GDP influence its wide use as a welfare indicator.