Geopolitics of Climate Change at the Global Think Tank Summit 2018

Geopolitics of Climate Change at the Global Think Tank Summit 2018

The Geopolitics of Climate Change were the focus of a panel at the 2018 Global Think Tank Summit (GTTS2018) in Brussels, hosted by European think tank Bruegel and the Think Tank and Civil Societies Program (TTCSP) of the University of Pennsylvania. Ecologic Institute prepared and hosted the panel, which covered the geopolitical dynamics of accelerating climate change as well as the geopolitical consequences of transformations such as in the energy and transport sectors.

Climate change is accelerating, leading to global overheating and ocean acidification. If not effectively addressed, climate change will have profound effects on human (in-)security, water, and food security, stability or state failure, potentially aggravating pre-existing tensions and conflicts. The geopolitical dynamics of climate change and climate action – action designed and intended to transform energy, transport, food, and other large systems – are rapidly becoming a theme of concern to many think tanks.

Most think tanks around the world work on war and peace, the control of territory, populations and resources, or economic activities and the appropriation and distribution of its benefits. Some think tanks focus on the protection of planet Earth and an equitable and sustainable society in all the dimensions captured by the UN Sustainable Development Goals (SDGs). The areas of interest and competence of many think tanks overlap on climate change and transformation policies, which makes it a great theme for the annual Global Think Tank Summit.

The presentations and ensuing discussion with the audience of principals and senior experts representing think tanks on five continents generated these key insights:

EventDiscussionBerlin Launch of the 2020 Go To Think Tank Ranking Index 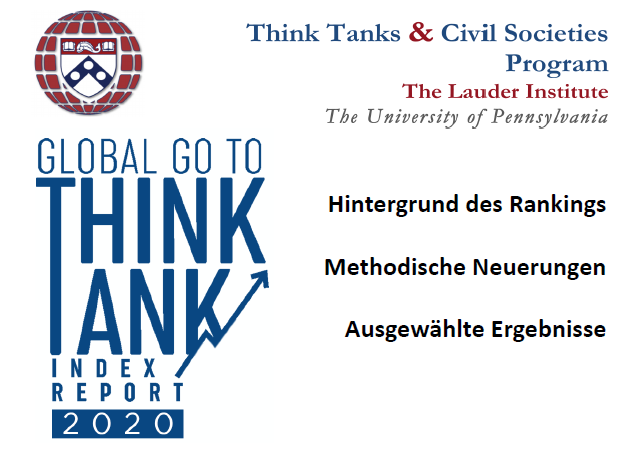 In light of the global challenges posed by 2020, the launch of the 2020 Go To Think Tank Ranking Index asked the question "why do think tanks & policy advice matter in times of crisis". The Berlin Launch event, hosted by Ecologic Institute, the Friedrich Ebert... Read more

Discussion:Berlin Launch of the 2020 Go To Think Tank Ranking Index

ProjectGeopolitics of the Energy Transformation
Braunkohletagebau nahe Berlin
The American Institute for Contemporary German Studies (AICGS) at Johns Hopkins University initiated a project in collaboration with the Ecologic Institute discussing the geopolitics of the Energy Transformation. The project included a conference with Camilla... Read more

Geopolitics of the Energy Transformation