Climate Change in the Arctic. Heading to the North Pole with the IPCC and the Polarstern

Climate Change in the Arctic. Heading to the North Pole with the IPCC and the Polarstern

The Arctic is warming twice as fast as the rest of the world. Lead by German research institutions, international researchers from 20 countries are now engaged in the largest Arctic exploration of all times: the MOSAiC Expedition. Research approaches, findings and the impact of the Federal Arctic Guidelines were presented and discussed in a packed high-level evening event at the Bremen State House in Berlin. Dr. Camilla Bausch of Ecologic Institute moderated the event.

The evening commenced with a welcome address by State Secretary Rita Schwarzlühr-Sutter in which she stressed the importance of multi-level and multi-disciplinary collaboration to properly understand and address the causes and effects of climate change in the Arctic. A short film then introduced the audience to the research mission of the MOSAiC Expedition. MOSAiC team member, Katharina Weiss-Tuider presented her experiences on the icebreaker and research ship, Polarstern, following a recent visit to the ice floe base camp. The MOSAiC project unites 20 nations and over 90 institutions for a multi-disciplinary in-situ study of the Arctic. Referencing Fridtjof Nansen's Fram expedition, the team will spend a year trapped in sea ice, drifting through the Arctic Ocean. The research will allow for unprecedented data collection in the Arctic region.  According to Weiss-Tuider, initial impressions indicate that the state of melting is even more critical than assumed.

The effects of climate change for the Arctic – and the world – were addressed by Prof. Hans-Otto Pörtner, Co-Chair of IPCC Working Group II "Impacts, Adaptation and Vulnerability". He presented the findings of the recent IPCC report. Along with the consequences of sea level rise and potential changes to the jet stream and meteorological effects, Prof. Pörtner stressed the need for ambitious regional adaptation to the ramifications of climate change. He also highlighted the social consequences if climate change remains unmitigated. In a sentiment echoes by the other panelists, he underlined the need for mitigating greenhouse gas emissions around the world – and in Germany – to limit the disastrous effects on the Arctic.

Leading into the panel discussion, Ambassador Sibylle Katharina Sorg, Director for Relations with European Union Member States, Cross-Border and Regional Cooperation for the German Federal Foreign Office presented an overview of the German Arctic guidelines. These guidelines have recently been adopted by the German Federal Government. They stress e.g. the importance of the polluter pays principle, the precautionary principle, multilateral cooperation and public international law. Moreover, they underline the need for research and for protecting the environment e.g. through enlarged protected zones.

Dr. Bausch then guided the evening into the panel discussion, featuring Prof. Pörtner and Ambassador Sorg alongside Rudolf Leisen of the German Federal Ministry of Education and Research (BMBF), Michael Schäfer from the World Wide Fund For Nature (WWF) and Martin Weiß of the German Federal Environment Ministry (BMU). The panelists showed unusually unanimity in their applause of the federal Arctic guidelines, while emphasizing the need for ambitious climate action at home and abroad. Prof. Pörtner warned against neglecting action, underlining that the state of research is advanced enough to facilitate direct action. The group also spoke of the importance of alliances between state actors and civil society in order to create the necessary changes. All of society must engage if a social transformation is to be achieved.

Topics such as the potential geopolitical consequences of Arctic melting, including on shipping routes and international security, and the development of an EU counterpart to the Federal Arctic guidelines rounded off the lively debate on the panel and with the audience.

The event was organized by the BMBF, the BMU, the Federal Foreign Office, the Alfred Wegener Institute and the German Environment Agency. Ecologic Institute provided conceptual support of the event. The Vertretung der Freien Hansestadt Bremen (Bremen State House) hosted the evening. 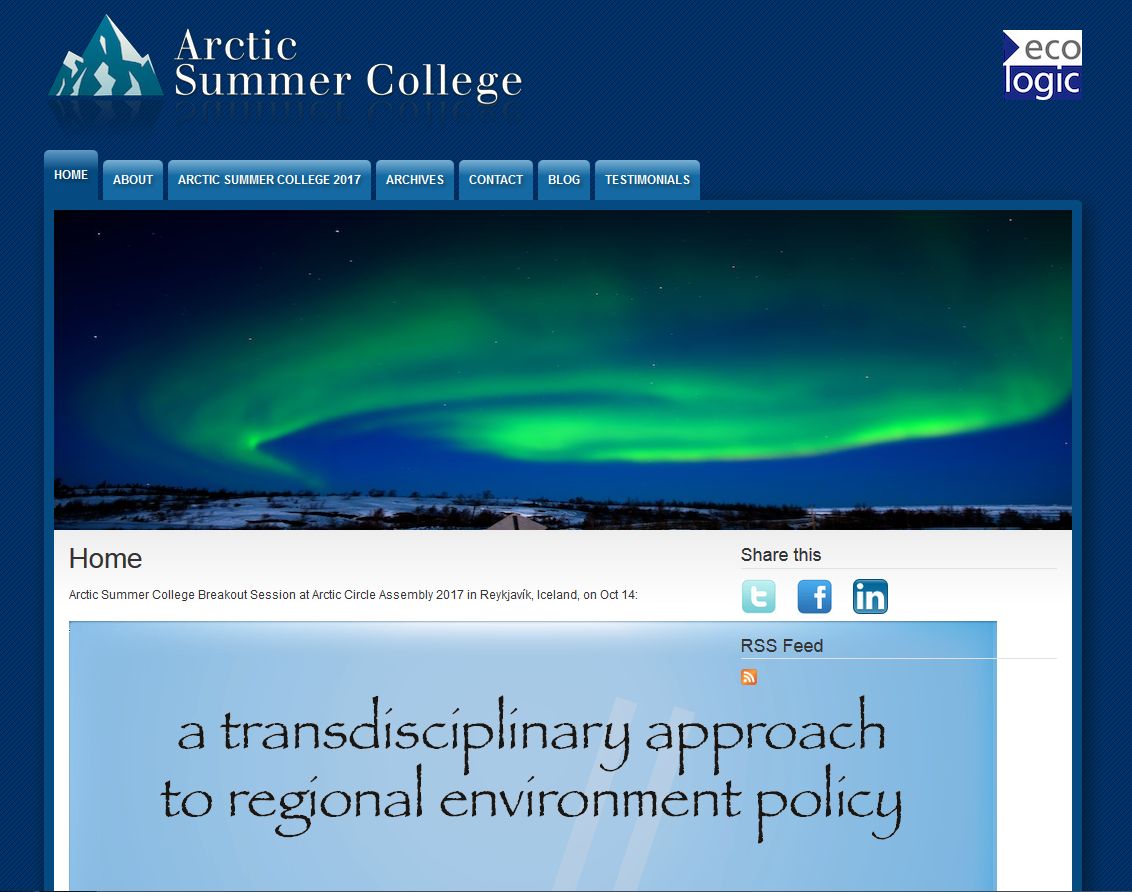 EventDiscussionFootprints in the Arctic – Evening event
Susanne Bergius (Handelsblatt) begrüßt das Publikum in Berlins Museum für Naturkunde
What does Germany actually have to do with the Arctic and what impact do our daily decisions have on it? These and further questions were discussed on 22 October 2018 during Ecologic Institute's evening event on Germany's activities in protecting the Arctic,... Read more

Discussion:Footprints in the Arctic – Evening event

EventDiscussionParticipation, Appropriation, Representation: Towards an inclusive, sustainable Arctic – Arctic Circle Assembly 2018 Side Event
Ecologic Institute's Arctic Summer College, supported by the Konrad Adenauer Foundation, organized a side event on the contexts of sustainable development in the Arctic, welcoming over 50 participants in the first session slot of Saturday at the Arctic Circle... Read more

PresentationSpeechMultilateral Governance in the Arctic via the Arctic Council and its Observers – an Arctic Community?
Arne Riedel, Ecologic Institut
Arne Riedel, Researcher at Ecologic Institute, presented the institutional framework for the Arctic and its changes as well as the possible influence of Arctic Council observers. Taking the expansion of regional interests into account, the presentation also examined the... Read more

Speech:Multilateral Governance in the Arctic via the Arctic Council and its Observers – an Arctic Community?

EventDigital Event100 Days In: COP21 and the Arctic's Future – An Era of Energy Transition
| Fotolia_© Goinyk Volodymyr
100 days after the successful negotiation of a global climate agreement in Paris, the Arctic is facing some of the warmest winter temperatures on record. As communities face threats to personal safety, livelihood, and culture, one pressing question remains: what effect... Read more

Digital Event:100 Days In: COP21 and the Arctic's Future – An Era of Energy Transition