The environmental program also had an impact on science: In its wake, the German government convened the German Advisory Council on the Environment (SRU) and founded the Federal Environmental Agency, thus laying the groundwork for the institutionalization of scientific environmental policy advice in Germany.

In 1976, the first update of the Federal Government's environmental program followed, which can be described as the beginning of a 'sustainability program' that established political rituals and rhythms that have contributed significantly to the stabilization of environmental policy in Germany. 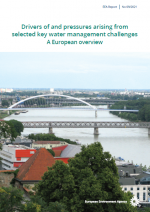 This report gives a European overview of the main drivers and pressures that are at the core of key water management challenges that put European water bodies at a severe risk of not achieving key environmental objectives. The EEA report "Drivers of and pressures arising from selected key water management challenges – A European overview" has been co-authored by the Ecologic Institute, the German Federal Environment Agency and the European Environment Agency. It is available online.

This fact sheet for the project INNOVA illustrates a literature review on the effects of climate change on beach wrack washing onto the German Baltic Shore. Beach wrack mainly consists of bladderwrack and seagrass, and it is likely that climate change will have various effects on these plants. Aspects such as rising water temperature, erosion, changes in salinity, eutrophication and oxygen deficiency are all affected by climate change. This will have direct effects on the composition and amount of beach wrack washing onto the Baltic Sea shores. The fact sheet by Ecologic Institute is available for download.

Coasts and seas are both characterized by intense social-ecological interactions, as well as the recent industrial appropriation of coasts worldwide and oceans being used as a waste disposal site for port industries and land-based production facilities. In September, White Horse Press' transdisciplinary history journal Global Environment published a special issue dedicated to Coastal Cities and their struggle to create coping mechanisms to respond to the recent crisis. The special issue was edited by Ecologic Institute.

Fixing Financial, Economic and Governance Structures to Save Forests and the Ocean – T20 Policy Brief

Forests and the ocean are vital for climate, biological diversity, and human communities, but they are degraded and their ecosystem services have become seriously impaired, mainly because financial, economic and governance structures are misconfigured. The authors of this T20 policy brief, among them R. Andreas Kraemer and Dr. Nico Stelljes (Ecologic Institute), propose that the G20 helps strengthen the REDD+ climate instrument for forests and to extend it to Blue Carbon from coastal and marine ecosystems. The T20 policy brief is available for download.

Just a few weeks before the UN climate summit (COP26), Dr. Camilla Bausch responded to the invitation to contribute to the most recent dossier published by ISPI under the tagline "Climate Change: A Global Fight at a Crossroads". Her timely contribution outlines the complexity of the issues and the international political landscape on the eve of COP26. The article is available online.

Climate and Growth: The Road to a Green Recovery – Dr. Camilla Bausch at the T20 Summit

Delivering for "People, Planet, Prosperity" is the proclaimed aim of the Italian G20 Presidency. The question as to how the G20 should work towards this aim was discussed at the Think 20 (T20) Summit in Milan in early October. The T20 Summit brought together 51 speakers, over 800 in-person participants and 16,000 online attendees from all over the world, reaching over 1 million people through social media. Experts such as Kristalina Georgieva (Managing Director, IMF), Tedros Shonom Ghebreyesus (Director-General, WHO), and Ester Duflo (2019 Nobel Laureate in Economic Sciences) shared their insights and views regarding current developments and key recommendations of the T20. Recordings of the T20 summit are available online.

As part of the Ecologic Institute's longstanding programme for capacity building on emissions trading, we launched the new online flagship of the programme: the ICAP online Emissions Trading Academy. From 16 August to 10 September 2021, the International Carbon Action Partnership (ICAP) convened the first ICAP Online ETS Academy. The Academy consisted of four modules: ETS basics, ETS implementation, policy & politics of emissions trading and global & regional action on emissions trading. Participants came from 35 different countries in Latin America, Asia, Africa, and Eastern Europe. The course offered participants an opportunity to deepen their understanding of ETS design and implementation and illustrated these processes through hands-on examples, practical experience and case studies. Recordings of some webinars are available online.

As part of its co-design process, the COACCH project organized a series of interactive stakeholder workshops to discuss research objectives, activities and outputs. The first three co-design workshops between 2018 and 2020 produced key insights to guide the COACCH project. In this fourth and final workshop, held on 9 and 10 September 2021, the project team presented their concluding research findings and together reviewed the final outputs to be produced. More than 40 participants from eight European countries joined the workshop. The results of the COACCH work have been summarized by Ecologic Institute for the workshop in a summary paper.

Urban Action Towards a New Deal for Nature – Moderation

Sustainable cities and infrastructure have been identified as one of eight transition pathways required to live in harmony with nature and to achieve the 2050 Biodiversity Vision. Responding to this potential, Ecologic Institute, together with the ICLEI African Secretariat and Durham University, co-organized a session 'Urban Action Towards a New Deal for Nature' at the IUCN World Conservation Congress on 7 September 2021. The session, moderated by Ecologic Institute's McKenna Davis, demonstrated the success of urban action for biodiversity through evidence and experiences from around the world.

In the Ecornet Berlin research partnership, five Berlin institutes of transdisciplinary sustainability research, among them Ecologic Institute, jointly provide an impetus for Berlin's transformation. Their annual conference "Knowledge. Change. Berlin. 2021" brings current research findings into dialogue with experiences from other cities and the voices of Berlin's practitioners as well as civil society – for a social and ecological capital. The annual conference of the Ecornet Berlin research partnership will take place on 2 November 2021 in Berlin.

Anchoring Climate Neutrality in Politics and Society – From Knowledge to Action

Germany wants to become climate-neutral by 2045, the EU by 2050. Both targets became legally binding in 2021, an important breakthrough on the way to structural transformation to a climate-friendly economy. What further breakthroughs are needed to anchor this transformation in society and enable its implementation? How can the responsibility of individuals, as well as economic actors for climate protection, be realized? We kindly invite you to discuss these questions with Matthias Duwe from Ecologic Institute on 26 October 2021. Please register your participation.