The project focused on the German technology suppliers’ business opportunities in the CDM/JI-market, and formulated recommendations to strengthen companies involved. It therefore analyzed strengths and weaknesses of technology  suppliers as well as success factors and barriers to participating in the CDM/JI-market. The aim of the project was to develop technology and host country specific recommendations to strengthen the role of German technology exporters in CDM/JI markets and to improve networking between certificate buyers and technology exporters.

The flexible mechanisms CDM and JI offer German companies the option to carry out projects in emerging economies and developing countries, using the resulting certificates for compliance with the European Emissions Trading Scheme. German companies are also involved in the CDM and JI as providers of technologies for the projects involved. This project focused on the latter opportunity for German technology providers to participate in CDM/JI-market.

The analysis included an expert survey documenting the experiences of German companies in CMD/JI projects aimed at gaining further insights on specific characteristics and success factors of the companies already participating in the CDM/JI-market, as well as barriers for companies that are not participating. The survey informed suggestions for simplification and improvement of German firms’ CDM/JI participation. 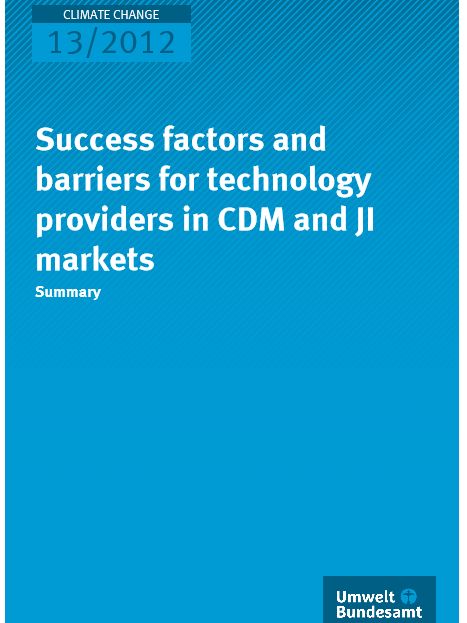 Ecologic Institute and Perspective GmbH analysed the role of German companies in the CDM and JI markets in this report funded by the German Federal Environment Agency. German producers of environmental technology hold leading positions on the world market today and are expected to do so in the future. However, German technology providers do not play a major role in CDM/JI projects: the share of German technology in CDM projects is less than 20%. An English summary of the report is available for download.