CLICO research supports existing insights that climate change and water-related stresses produce an impact on human security in combination with a range of social, economic and political factors. For example, several CLICO case studies on Niger, Turkey and Ethiopia confirm existing insights that social marginalization and poverty can exacerbate vulnerability to climate stresses and human insecurity.

By contrast, the link between climate change and water conflicts is, at most, indirect. For the majority of conflict situations studied in the CLICO project, political, economic and social factors were found to currently be of greater importance than water scarcity or climate-related stresses. However, it is not clear how this balance may change in the future.

States play a key role in adaptation, as they can plan and facilitate adaptation by providing the regulatory frameworks that govern adaptation actions by individuals, groups and communities. States may be more capable than individuals or communities of changing wider socio-economic conditions that lead some population groups to be particularly marginalized and thus also vulnerable to climate change. Still, state-led adaptation is not a silver bullet. One reason is that too much dependence on states can reduce the capacity of communities to adapt autonomously. In some cases, states may respond to the demands for protection by particular groups, shifting costs and risks to others.

CLICO research also shows that adaptation may have negative and counterproductive effects. One example is found in Niger, where agro-pastoralists have adapted to poor yields from unreliable rainfall by expanding croplands and seeking payment in response to crop damage by grazing animals. These self-adaptations have lessened the adaptive capacity of pastoralists in the area, who find the area of grazing lands that they have access to diminished and their expenses increased because they have to pay for crop damage by their herds.

Climate change has a negative impact on human security, but not on water conflicts 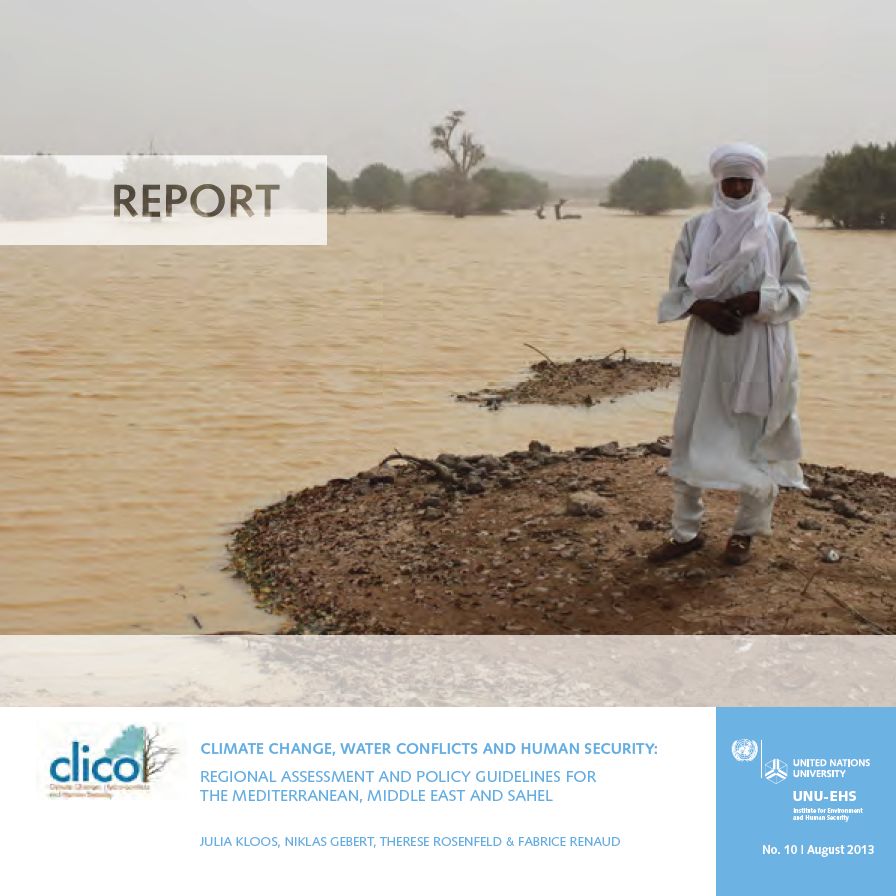 Climate change has and will continue to have far-reaching impacts on environmental, social and economic conditions. Increasingly, climate change and the associated increase in the frequency of extreme weather events such as floods, droughts and rising sea level is recognized as not only having humanitarian impacts, but also creating political and security risks that can affect national/regional stability and the welfare of people. This report presents a comprehensive regional assessment of these questions in the CLICO study area – the Mediterranean, Middle East, and Sahel - and is available for download. 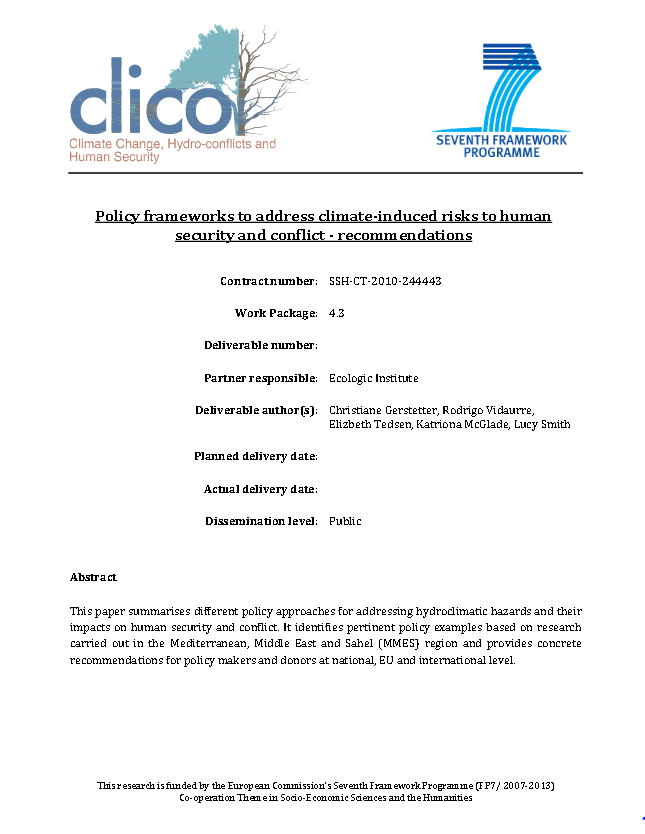 Read more
Publication:Case Study
The wide scope of the United Nations system permits coverage of a wide range of issues, but encounters challenges with institutional coordination, conflicting state interests and limited control over national or sub-national developments. Cross-sectoral work on climate, water, human security and conflict is limited, but improving. Overall, initiatives focusing on information collection and sharing, capacity-building and promoting cooperation are considered to have the highest potential for addressing climate and water-related human insecurity and conflict. The case study is available for download.

Read more
Publication:Case Study
This case study reviews the effectiveness of EU-level policies and measures for addressing the impacts of climate change on water, conflict and human security. It draws attention to gaps in the current policy framework and outlines actors' expectations and demands for a future framework. The case study is available for download.

Read more
Publication:Case Study
This case study provides an overview of the current policy framework in Morocco for addressing the impacts of climate change on water, conflict and human security. It presents insights into the effectiveness of Moroccan policies and examines actors' expectations and demands for a future policy framework. The case study is available for download.

Read more
Publication:Case Study
This case study analyses policy-frameworks in Israel and the occupied Palestinian Territory (oPT) which are relevant for addressing water-related impacts of climate change that could have negative impact on human security and conflict. The effectiveness of these policy frameworks is analyzed, based mainly on interviews with Israeli and Palestinian experts. The case study is available for download.

Read more
Publication:Case Study
This case study for Ethiopia is a contribution to the study "Current policy frameworks for addressing climate-induced risks to human security and conflict – an assessment of their effectiveness and future perspectives".

Read more
Publication:Case Study
This is the short version of a longer analysis of the effectiveness of policy frameworks for addressing hydro-climatic hazards and their impacts on human security and conflict, which is based mainly on interviews conducted with policy-makers and experts in Ethiopia, Morocco, Israel and the occupied Palestinian Territories (oPT), as well as representatives of the EU and the UN. This short version is available for download.