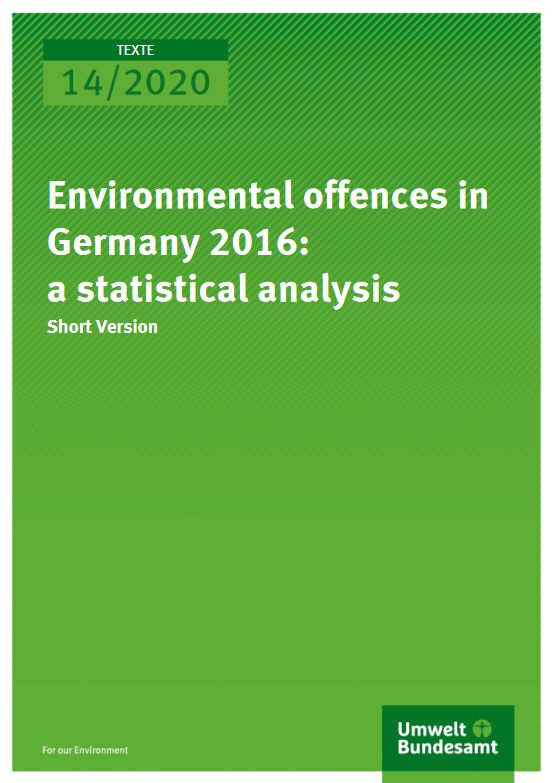 This publication provides a quantitative overview of the development and status of environmental crime in Germany between 2004 and 2016, based on data from the police crime statistics ("Polizeiliche Kriminalstatistik") and the Federal Statistical Office's criminal prosecution statistics ("Strafverfolgungsstatistik"). The report provides both, an overview of general trends and an in-depth account of individual environmental offences. In addition, the publication contains data on administrative offences relating to trafficking of protected species. The report was prepared by a team from Ecologic Institute on behalf of the German Federal Environment Agency.

The main findings are as follows:

The number of cases of environmental crimes registered by the police fell by  32 % between 2004 and 2016, while several of the relevant criminal provisions were extended to cover a broader range of behaviour over the same period of time. The main reason for the observed is most likely not an actual reduction in environmental crime, but a reduced number of staff in authorities carrying out controls. Crimes are therefore discovered less frequently, while the number of unreported cases remains high.

In particular, the amount of registered cases of water and air pollution changed markedly: In 2016, the numbers of registered cases were almost 40 % below the figures for 2004 in the case of water polluation and more than 30 % in the case of air pollution. The number of known cases of illegal waste handling also fell by around 50 % during this period. At the same time, however, there was a significant increase in the number of known cases of unauthorised import, export and transit of waste. More than three times as many cases occurred in 2016 compared to 2004.

The proportion of convictions, concluded proceedings and acquittals for environmental offences remained relatively constant between 2004 and 2016.

With this publication, the German Federal Environment Agency has resumed its series "Umweltdelikte" (Environmental Offences), which describes the status and development of environmental crimes on the basis of police and court statistics. Up to the 29th edition, which appeared in 2006 as "Umweltdelikte 2004", the series was published annually. After a twelve-year break, the 30th edition is now available for download.

In addition to the main report in German "Umweltdelikte 2016: Auswertung von Statistiken", the English summary "Environmental offences in Germany 2016: a statistical analysis" has also been published.

Coordinator Adaptation
Senior Fellow
Previous Pause Next
Event:Workshop
Environmental crime has diverse appearances and impacts. The ecological consequences range from the destruction of forests to the pollution of water, soil, and air and even to species extinction. Moreover, many types of environmental crime also affect human health, and organised forms of environmental crime undermine state structures. Environmental crime is increasingly being discussed again at international and EU level. However, it is always emphasised that there is a lack of a robust database and thus also a gap in the knowledge base. 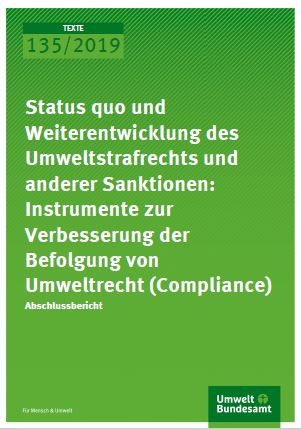